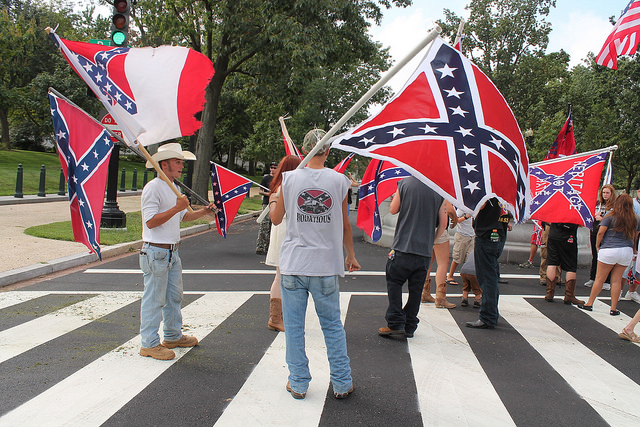 I’m losing track!  North Korea and its nuclear arsenal are relegated to the back page and we are fighting the Civil War again.  Note to self and others: the Civil War was fought over SLAVERY, not states rights, not economic rights, SLAVERY.

Perhaps it has never been truer, “If you do not know your history, you are condemned to repeat the past.”  But in this time of fake news and alternative facts, we fight over the statue of a man who committed treason, a West Point graduate, no less.  And not an alternative fact, statues of this man abound throughout the South.  Why?  Slavery, an edict from God?  Also not an alternative fact, these statues were mainly erected celebrating the end of reconstruction.  Thus the South rises again through the symbol of Robert E. Lee.  Ouch!  Is this the legacy of our history that Trump refers to?

Collier Myerson, a fellow at the Nation Institute, where she focuses on reporting about race and politics, and an investigative fellow at Reveal will be on the show Thursday. She received an Emmy for her work on the MSNBC’s All in with Chris Hayes and won the National Association of Black Jounralists’ 2016 award for commentary. Collier examines that legacy in her latest articel in the Nation, “Fighting White Supremacy Means Owning up to American History.”

I imagine that you, like me, need some honest wisdom that comes from deep within the soul.  There aren’t too many individuals that have the quality of such wisdom and I am so happy that DR. GWENDOLYN ZOHARAH SIMMONS, spirit-filled woman, an activist, an organizer, and a scholar who has lived her life searching for the most meaningful ways to be human in the world. Dr. Simmons is an Assistant Professor of Religion and affiliated faculty in the Women Studies Department. Simmons received her BA from Antioch University in Human Services and her M.A. and Ph.D. in Religion with a specific focus on Islam from Temple University as well as a Graduate Certificate in Women’s Studies. Simmons’ primary academic focus in Islam is on the Shari’ah (Islamic Law) and its impact on Muslim women, has agreed to talk with us about her take on the events of Charlottesville.  With all the experiences and historic events of her life, I am curious how she compares Mississippi Burning of 1968 to the torch bearing protesters gathering outside St. Paul’s memorial church in Charlottesville Friday night.  We particularly remember talking with Dr. Simmons about her participation in Mississippi Freedom Summer voter registration.

I do hope Martin Luther King was right “that the arc of history bends toward justice.”

Tune into From a Woman’s POV Thursday at 10 am!