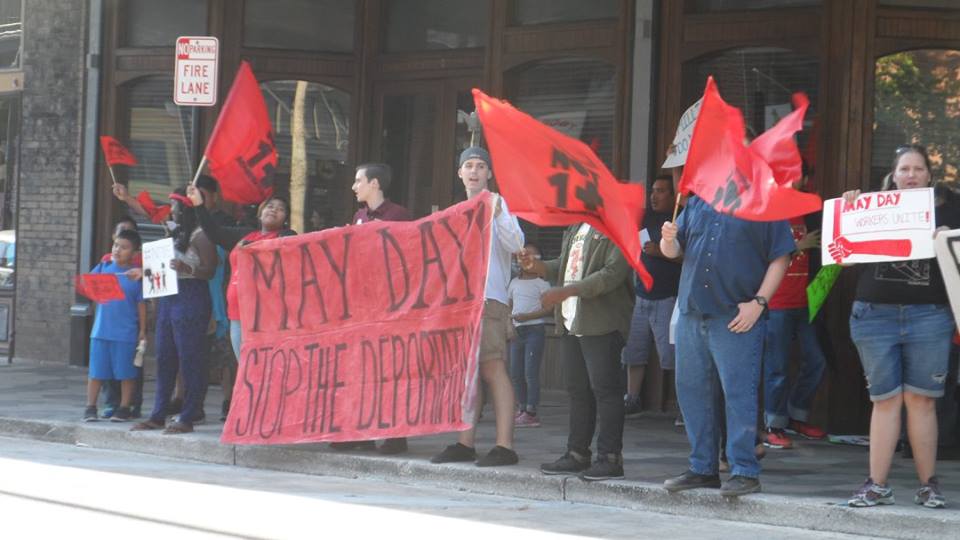 Monday is May Day or International Workers Day; on MidPoint we speak with people helping to organize May Day rallies in the Tampa Bay area.

The Tampa May Day march and rally is sponsored by 15 groups and is this evening from 5:00 p.m. until 8:00 p.m. beginning at the Sociedad La Union Marti Maceo Cuban Club, located at 1226 East 7th Avenue in Ybor City.

Marc Rodrigues is a field representative with the Florida AFL-CIO, based in West Central Florida which includes the Tampa Bay Area. Marc helps to coordinate political and organizing activity among local unions.

Unlike much of the world, May Day is not a holiday here in the U.S. We looked at the Haymarket origins of the modern labor movement; the connection between the May Day labor movement & immigrants’ rights movement, especially since 2006; and the relation to minimum wage increase demands.

This is the way today’s rally is described on the Facebook event page: “Join dozens of community, labor, immigrant, faith, student, women’s rights and other organizations as we celebrate May Day — International Workers Day — with a march and tour of Ybor City’s historic labor movement battle, connecting yesterday’s immigrant worker movements to today’s fights for worker’s rights and against the rising tide of racist, xenophobic, anti-worker politicians and policies that seek to divide and oppress us.”

Here’s how it’s described on the Facebook event page: “Join Food Not Bombs St. Pete, the Revolutionary Caucus of Tampa Bay, Refuge Worker Center, Refuge Ministries of Tampa Bay/International, PPEHRC and others as we celebrate May Day, International Workers Day with Food Not Bombs St. Pete in Williams as we do a meal share with those who are hungry and anyone who believes in Food as a Human Right. We will have Vegan/Vegetarian dish (please bring a dish and let us know what you are bringing). We will have some speeches, thoughts, music and some spoken word/poetry.”

There was a third May Day celebration Sunday in Tampa, it was in downtown’s Gaslight Square Park yesterday afternoon and called “MayDay: Stop Trumps Attacks on Workers, Immigrants & Muslims!” It was organized by Freedom Road Socialist Organization.