Home Blog News and Public Affairs A Tampa City Councilmember met with a violent right-wing group Monday night: “We have to stop seeing one another as enemies” 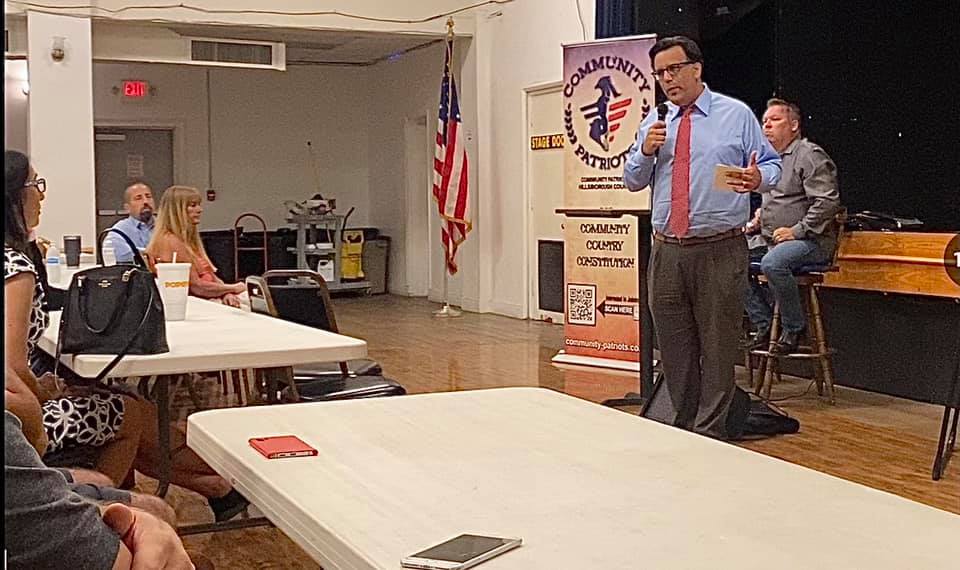 Viera represents District 7 in Tampa. And while his position on the City Council is non-partisan. He is a registered Democrat with progressive views. He said he knew he might be walking into a hostile political environment.

And that’s why he did it.

“My intent was to go to a platform that was controlled by folks with whom I strongly disagree in order to articulate my values and what I believe in,” Viera said. “My disturbance in what I’ve seen over the last few years and why I’m disturbed.”

Viera said he spoke to the organization about the reality of systemic racism and implicit bias; the importance of equal justice; how he feels limiting refugees during the Trump administration was a violation of the “American Way.” He also spoke about needing to end political divisiveness and the damage to Democracy events like the Jan. 6 Capitol insurrection can do.

“This was not about elevating somebody else’s voice,” he said. “This was about going to another’s platform to articulate my values and my great concern over what we’ve seen in the last few years. In my opinion, we need more things like this, not less.”

But in Tampa Bay’s activist community, some, like Jennifer Young, were shocked and concerned that Viera would give voice to a group with a growing reputation for using violence to silence opposing voices.

“This is not a both-sides issue,” she said. “The Community Patriots, the folks that they support are really dangerous. Mr. Viera should have done his research before he attended that meeting. He should’ve come and spoke with folks who are on the ground and have been hurt by this group.  By attending that meeting he normalized them. And that’s not acceptable. This is not a political issue. It’s a humanity issue.”

A history of violence

The group was thrust into the spotlight with controversy when it helped to illegally block streets to paint a “Back the Blue” mural on a Tampa street. Then Hawks and another member of the organization convinced former Congressional candidate Christine Quinn to fly them in a private jet to Washington for the Jan. 6 Trump Rally that turned into the Capitol Insurrection.

According to court records, Hawks told Quinn he was supposed to be part of a security detail at the event. Quinn, who relinquished a lifetime membership with the group is now suing Hawks. She said he bragged about how much money his group was raising and was supposed to pay her back. But after the riot, he shirked the responsibility.

And in February the group got violent.

At Hawks insistence, members of the Community Patriots went to a city council in New Port Richey to intimidate members of a Black Lives Matter group and prevent them from practicing their First Amendment right to speak at public meetings. One member, Jason Duckworth, was arrested for battery after attacking a BLM activist outside City Hall. Hawks called him a “legend” and “patriot” for his actions. Community Patriots then celebrated forcing Black residents from safely speaking during City Council meetings.

What would an ally do?

Nina Boneta is one of the leaders of Black Lives Matter Pasco.

“They like to come to our marches and literally harass us in every single way they can,” she said. “Some of them have literally put their hands on us. People that are on their side have came and brandished guns at us.”

Viera said he was unaware of the Community Patriots’ involvement on Jan. 6 and their growing reputation for violence.

“Legitimizing an organization like this is obviously terrible,” Viera said. “That was clearly not my intent.”

Boneta has personally dealt with threatening and violent actions of the Community Patriots. But she gave Viera props for talking to them. She said as a Black woman, she is not someone who could go into their house and try to change their minds. But as a white Hispanic who holds a position of power, Viera can get away with that. She said more should follow in his example.

“The fact that the man went in there and tried to tell these people what’s really going on. I mean, I can respect that,” Boneta said. “That’s what someone’s white voice should be for. To speak up in places where people like me can’t. From what I know of that action, that is something an ally would do.”

WMNF obtained a copy of an email written to councilmember Viera’s government email address by one of the Community Patriots who heard him speak Monday. Those emails are available in the public record.

“I found your comments about racism in our country offensive. You uttered the divisive Democratic party line and insulted most of the people in that room. You spout facts about American history but appear to support the gratuitous erasing of it.”