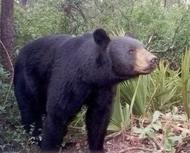 Over the weekend the controversial hunt of black bears in Florida was called off after almost two days because so many bears were killed; our guest on WMNF’s MidPoint was Tampa Bay Times staff writer Craig Pittman, who witnessed part of the hunt from a station in Central Florida.

The bear hunt was supposed to last a week. As of Sunday night 295 bears had been killed. That number was increased to 298 Monday afternoon. There was a total limit of 320. Hunting was allowed in four different bear management units. In the Central Florida unit, more bears were killed than the limit permitted. In the eastern Panhandle nearly three times the limit of bears were killed.

We talked about how there could be more bears killed than the “limit” in a particular area and how the limit is enforced.

It’s possible that the number of killed bears might still increase because hunters have 12 hours to get animals to a Florida Fish and Wildlife Conservation Commission checkpoint.

The FWC sold more permits (3,378) than the latest estimate of the bear population (3,300). It took in $376,900 from the sale of permits. FWC commissioners are appointed by the governor.

Hunters took steps days and weeks before the hunt to prepare.

Continue reading below or listen to the whole show here:

Until 2012 black bears were on the state’s imperiled species list. We looked at whether there is a reliable population estimate for bears in Florida and why there was a hunt before the latest numbers were in. We also touched on the role of suburban development in bear-human interactions.

The fact that this was the first bear hunt in Florida in 21 years may have affected the behavior of black bears with respect to hunters.