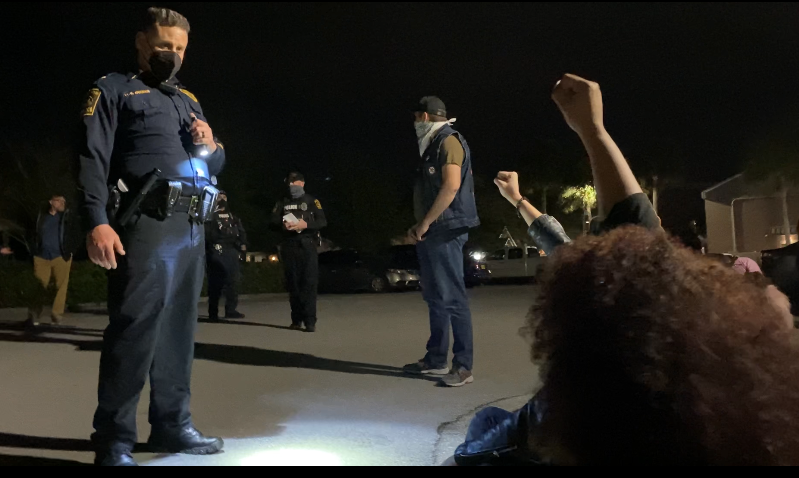 A New Port Richey City Council meeting turned violent Tuesday when a Black Lives Matter activist was attacked outside of City Hall. One arrest was made after tensions between activists and a group called “community patriots” went from the council chambers to the parking lot.

The confrontation at Tuesday’s meeting boiled over from an exchange between mayor Rob Marlowe and Black Lives Matter Pasco founder Christina Boneta at a meeting earlier in the month.

“People from your group have posted stuff on Facebook,” Marlowe said. “Listen to me.”

“The problem is you guys don’t see what’s wrong.”

“The fact is you can’t fix something that you don’t see.”

“Racism is rooted in this community and unless you realize it, you can’t change it.”

Another council member is heard encouraging Marlowe to use his gavel to bring back order.

“Use the hammer. Use the Hammer,” he’s heard saying.

“Black Lives Matter group attacked the chief of police implying that he was a part of the insurrection. And I take personal offense to that.”

That’s all right wing groups needed to hear. Jeff Hawks founder of Community Patriots, put out a call to action. In a Facebook post, he said “There is a faction of BLM that has been attacking the City Council…Any patriots in Pasco specifically New Port Richey that can make this city council meeting it would be greatly appreciated.”

More than a dozen showed up. Some weren’t even sure what they were doing there. Tammy DeLoy said she lives a few blocks from City Hall and spent all summer listen to the protests.

“I am totally unprepared, honestly, to come here. I’m a member of the Tampa and Pasco Community Patriots. We were told to come here because of all that was going on. I, honestly, was out in the hall so I didn’t really hear about it. I had come up to one of the protests up here and realized they are highly uneducated.”

The Community Patriots are known for supporting former president Donald Trump along with extreme right-wing views and policies. On Jan. 5, founder Jeff Hawks, who owns Metro Express Cleaners in Tampa, posted a photo boarding a private plane to Washington with St. Pete rapper and devout Trump supporter Kurt “Forgiato Blow” Jantz. In a song dedicated to Ahsli Babbit, the insurrectionist killed during the riot, Jantz admits to being at the Captiol during the riot.

RELATED: Trump-supporting St. Pete rapper wants you to be in his music video tribute to woman killed in Capitol insurrection this Sunday

DeLoy said she didn’t believe racism is an issue in New Port Richey. But for months, activists marching in solidarity with George Floyd and other Black Americans killed and abused by police have said they’ve experienced abuses themselves. National outlets like the Washington Post even found their way to the small city after activists began complaining they were arrested and hit with fines while counter-protesters, including the violent groups like the Proud Boys were allowed to yell, harass and intimidate with little to no consequence.

Noise violations against protesters have been dropped. But others face charges stemming from arrests they said targeted the group’s leaders.

On Tuesday, Boneta, a local leader, was frustrated.

Police tried to keep both sides calm. Community Patriots standing near the door shouted at Black Lives Matter activists who began to shout back. Eventually, Marlowe asked police to remove the activists. They kept chanting from the lot. A frustrated Marlowe asked the chief to trespass them, but they were not in the building so the doors were closed.

More Patriots waited outside. Among them, 53-year-old Jason Duckworth. As Duckworth approached Boneta, activists surrounded her. They wanted to protect their leader, Robin, an activists, said. Video shows Duckworth approach the group. When they don’t let him by, Duckworth grabs Robin and throws them to the ground.

No ambulances were called and no injuries reported. But a few minutes of chaos and screaming erupted in the lot. One officer is seen pulling out a can of mace and pointing toward activists. He’s even seen pushing one who was away from the ruckus and had bent over to pick something off the ground.

Eventually, Boneta calmed much of the crowd and told them to sit.

The group quieted as she raised a fist above her head and through tears pleaded with officers.

Duckworth was charged with simple battery and taken to Land O’Lakes jail.