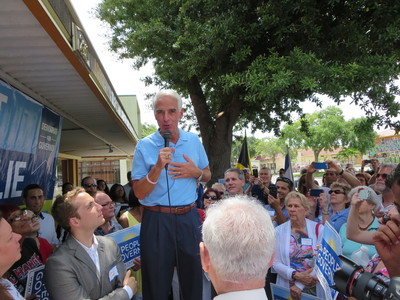 If Charlie Crist is re-elected governor this year he says he will reconvene two environmental summits that were held at the beginning of his previous term as governor. One hundred or so Crist supporters were on hand Saturday to help launch a new St. Petersburg campaign office.

“…and climate change. All of it. Absolutely. It’s so important. A lot of that is interrelated to Florida’s economy. The environment and the economy of Florida are inextricably linked. They go hand in hand. And anybody who doesn’t understand that shouldn’t be governor of Florida. And we’ll look at the Everglades plan again. We were able to buy about 73 thousand acres ’cause the economy tanked. But we can look at it again; ’cause, hopefully things are going to get better. I know they will.”

Supporters coped with the hot and humid summer St. Petersburg weather. Around noon Crist climbed atop a makeshift riser that looked like soapbox and engaged the crowd along Central Avenue. He stumped on issues like a more robust education budget, higher salary for teachers and saving the environment. Crist said creating jobs means being innovative and playing to Florida’s strengths.

“We’re going to re-energize our space program with people like Elon Musk and Space X. We have some of the best minds over there on the Space Coast. We’re talking about helping out the nation and the people. The people of Cuba, only 90 miles south of our Florida. If we rid of the embargo and we redevelop that island, guess who gets to do it all? Florida. Now that’s a jobs program.”

St. Petersburg city council member, Steve Kornell was one of the several local politicians on hand. He has worked within the school system for years. Kornell said Crist’s track record bodes well for the future of education in Florida.

“When you cut $1.3 billion and you put back a little bit of that and you have a lot more kids; so you’re have less spending per pupil. We understand that governor Scott cut education. You won’t get to ask him that question because he’s too good to answer questions to reporters. He’s above all that. But that’s a fact. We understand that. He’s not the education governor. Governor Crist got it. Governor Crist stood for us.”

Crist didn’t talk about Amendment 2, which could legalize medical marijuana in Florida. Rachel Dylas, with the advocacy group Medical Marijuana Tampa, said the future of prescription cannabis would be clearer with Crist as governor.

“If Charlie (Crist) doesn’t get voted in, it will probably be a little bit more restricted. Just in terms of what Rick Scott’s stance on the matter is. It’s been a little bit wish-washy. We don’t know exactly what his stance is. It seems like he’s trying to cater to different demographics and things like that. But we know Charlie on board 100 percent. He’s all about yes on Amendment 2.”

In August Crist will face Nan Rich and other Democrats in the primary. The general election is in November.