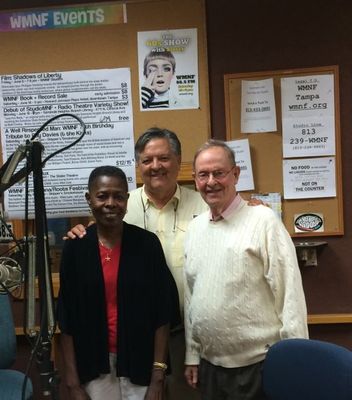 Today on Radioactivity, Rob Lorei speaks with Eric Deggans a veteran newspaper reporter, music writer and a media critic. Deggans now works for National Public Radio as a TV critic. He’ll be speaking at the Mirror Lake Library this Monday in St. Petersburg at 5PM. In his book Race-Baiter, Deggans dissects the powerful ways modern media feeds fears, prejudices, and hate, while also tracing the history of the word and its consequences, intended or otherwise.

This summer marks the 50th anniversary of Freedom Summer- a massive voter registration drive took place in one of the most segregated states in the country- Mississippi took place. On June 24th a new film about Freedom Summer will premier on PBS. Next Tuesday night the film will be shown at the Tampa Theater.

Rob speaks to three veterans of the civil rights movement; Dr. John Hartman, a practicing clinical psychologist and psychoanalyst in Tampa, John Logsdon who served as served as President of the local CORE chapter in 1962 and 1963 (Congress of Racial Equality) while at the University of Missouri and Gloria Newton who has been president of the local NAACP Youth Council.