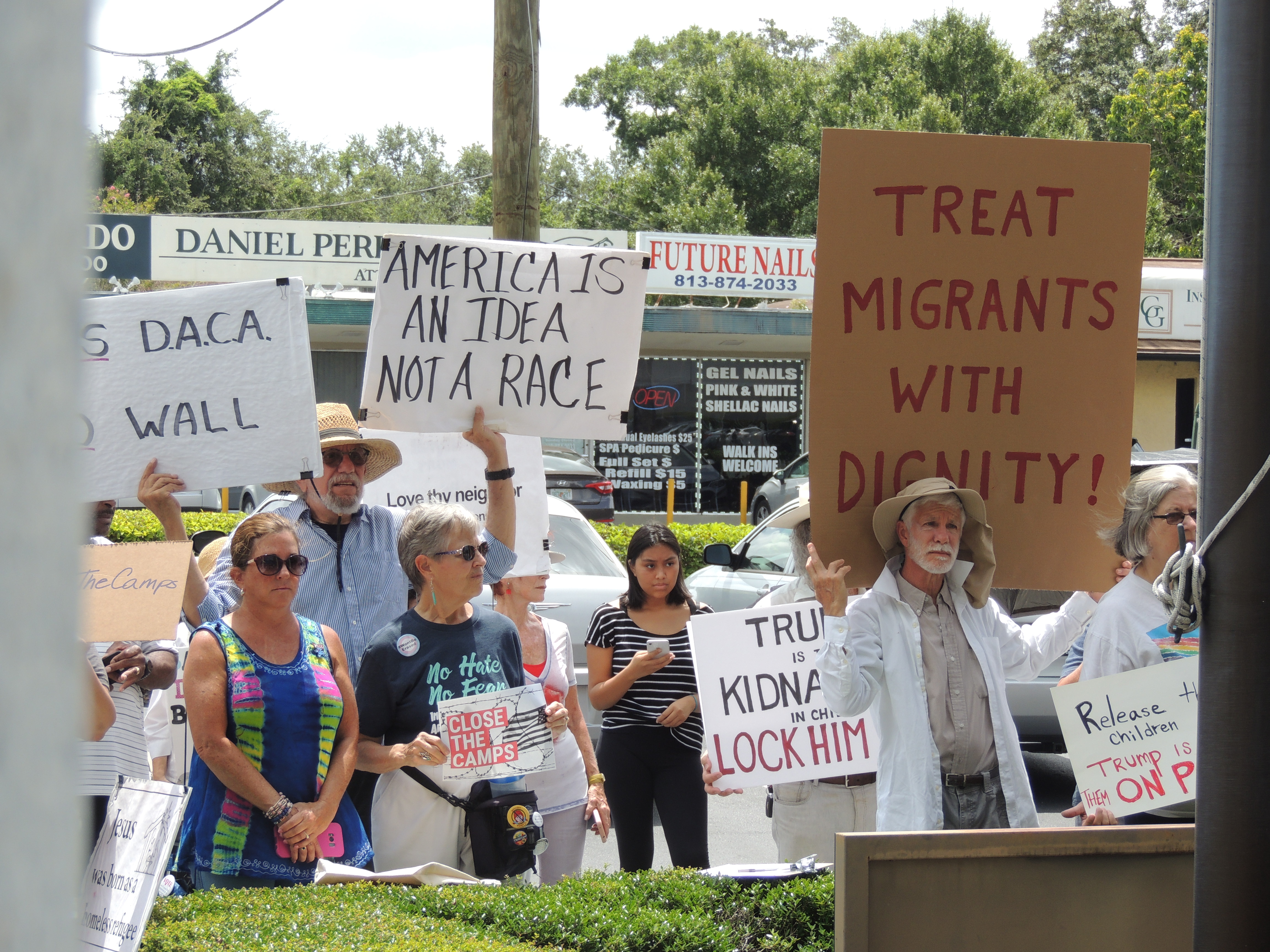 It was part of a coordinated nationwide demonstration against the Trump administration’s treatment of migrants. Ann Preus is a retired school teacher.

“I’m here because of the children. Nobody should treat children that way. I don’t care who you are, don’t put children in cages.”

SK: What are some of the stories you’ve heard about the treatment of children that most concern you? Give us an idea.

“That they separate them from the parents at the age — I taught for 37 years in kindergarten and first grade. They are separating babies from their parents. The psychological damage they are doing to those children, we are going to have for hundreds of years after. It is going to become generational. And so, I mean, they’re cutting off their noses despite their faces. Come on, you don’t treat babies this way. You don’t separate them. You don’t take children this young away from their parents and not give them back. I mean, what were they thinking?”

Another #CloseTheCamps protester, Patrick McGirk, held a sign with a message on each side.

“‘Treat migrants with dignity.’ And, ‘We are better than this.’ From what I’m hearing on the news, this is very simply a human rights issue. I’m hearing that people are overcrowded in camps without sanitary conditions. I’m hearing women being told that they can drink out of toilets if they are thirsty. I’m hearing that children are sleeping on concrete floors with aluminum blankets with the lights on all night. I hear that toothbrushes and toothpaste and soap are too much to ask for. And there’s plenty of money.” 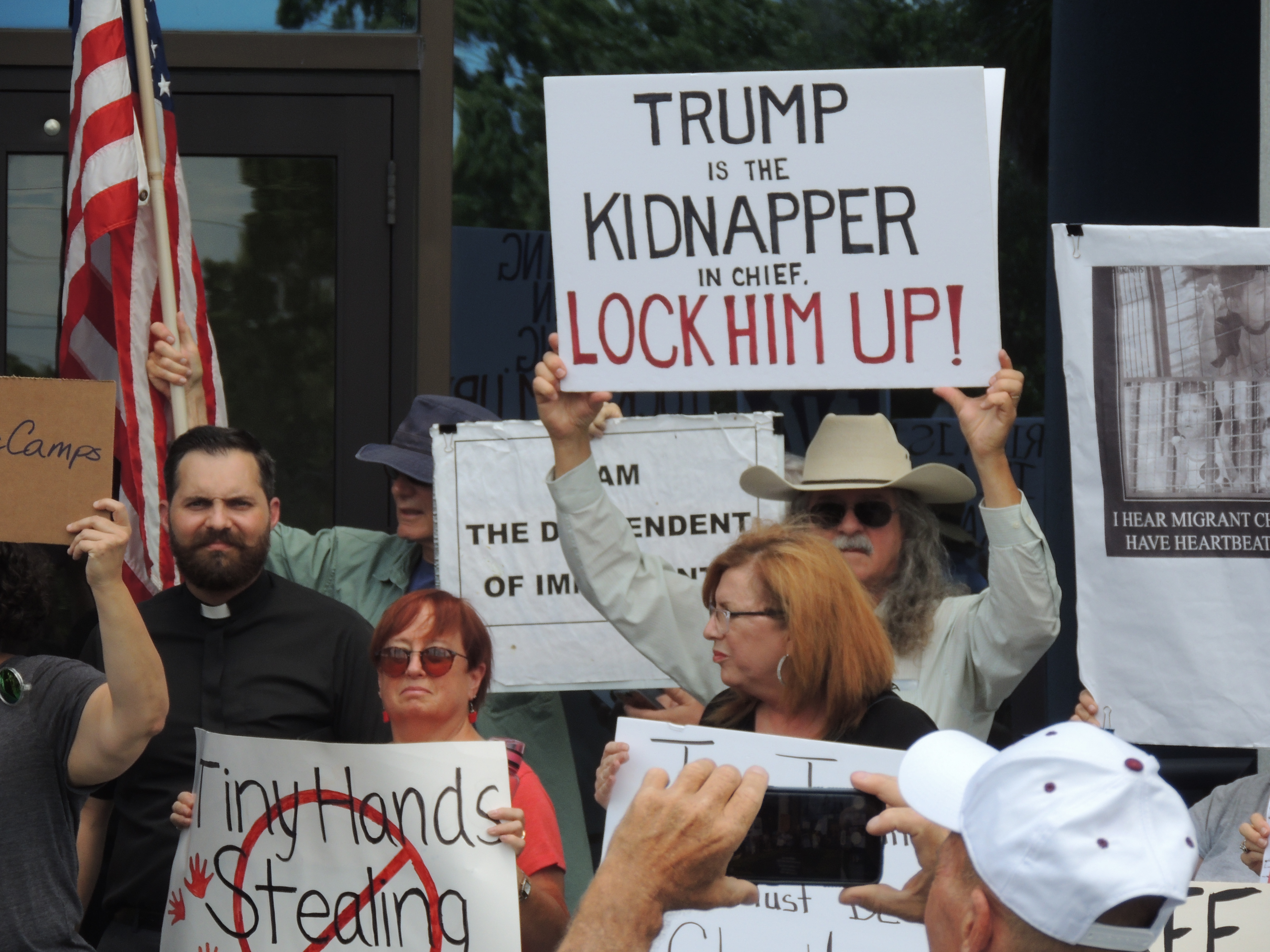 In an email statement from her office, Castor says, in part, “President Trump’s immigration policies are misguided and inconsistent with American values. I strongly oppose the cruel separation of families and the mistreatment of asylum seekers and refugees.” [read the rest of the statement below]

There were also #CloseTheCamps demonstrations scheduled Tuesday afternoon in Spring Hill and at the Bradenton and Sarasota offices of Congress member Vern Buchanan.

“President Trump’s immigration policies are misguided and inconsistent with American values. I strongly oppose the cruel separation of families and the mistreatment of asylum seekers and refugees. I am appalled by the conditions reported for children and families in detention centers and have held oversight hearings and supported legislation to tackle the humanitarian crisis.

“I supported House Democrats’ H.R. 3401, the Emergency Supplemental Appropriations for Humanitarian Assistance and Security at the Southern Border Act of 2019, which passed the House last week. This bill would have provided new protections for children and families along with $4.5 billion in emergency supplemental appropriations to federal agencies for humanitarian assistance and border security. I am deeply disappointed that the Senate refused to take up our version of this legislation, but the Senate version of the $4.5 billion emergency aid package was passed last week and it speeds resources to families. As we move forward, I will continue to press to ensure that migrant children are protected and treated as we would want our own children to be treated and that families are reunited.

“Thankfully, the federal courts have stepped in to provide oversight and accountability. Last Friday, a federal judge ordered Trump immigration officials to allow doctors and public health professionals into detention facilities housing migrant children to address safety and sanitation concerns. The court also urged the independent monitor to address the horrendous conditions in Border Patrol facilities and to ensure that doctors assess the detained children’s medical needs. The court imposed a July 12 deadline for the Trump administration to report on what has been done ‘post haste’ to fix the conditions.

“Last year, when the President’s family separation policy came to light, I called for immediate oversight hearings to address the reunification of children forcibly separated from their parents and pressed the U.S. Department of Health and Human Services (HHS) Secretary Alex Azar and U.S. Department of Homeland Security (DHS) Secretary Kristjen Nielsen to reunite children and parents immediately. I also demanded HHS and DHS Inspectors General (IG) conduct an immediate investigation on how the agencies are keeping track of children separated from their parents by Trump’s cruel policy and report on the reunification of parents with their children as soon as possible. The HHS IG reported that far more children were forcibly separated than reported by the administration. When Democrats took the majority in the U.S. House one of our first priorities was to hold an oversight hearing that the Republicans had refused to conduct.

“Since then, I have cosponsored HR 541 – Keep Families Together Act and H.R. 2415 – Dignity for Detained Immigrants Act of 2019. The Keep Families Together Act would permanently end the separation of children from their parents. The bill also institutes safeguards to protect and promote the legal rights, health and wellness of asylum seekers, children, and their families. The Dignity for Detained Immigrants Act targets the inhumane conditions of detention centers that the Department of Homeland Security (DHS) uses to house tens of thousands of immigrants. It would end the use of private prisons and county jails to detain immigrants, set humane standards for detention facilities, increase oversight of these facilities to eliminate abuse, and better protect the civil rights of immigrant detainees.”