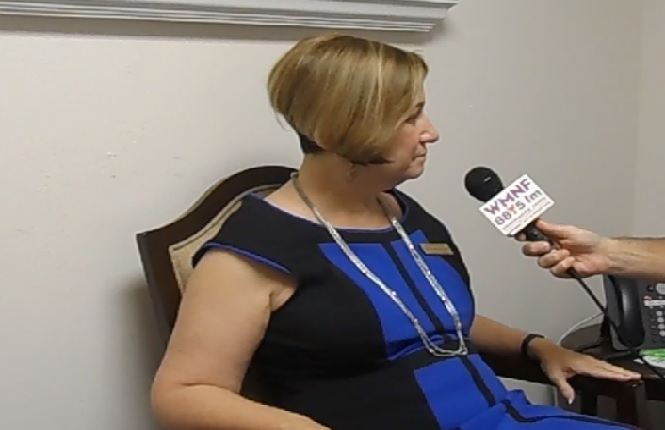 Thousands of families in the Tampa Bay area don’t earn enough to buy the right amount of food, even with some government assistant programs. That’s where community food banks come in — like one in the small downtown headquarters of St. Petersburg Free Clinic. Its executive director, Beth Houghton, says it provides people shelter, health and food, but will be able to expand food bank services as it announces a new community food bank. The Jared S. Hechtkopf Community Food Bank will be in Lealman.

Listen to this interview here. More audio and video below.

Melanie Kelly is a mother of two kids who works and qualifies for help from the Supplemental Nutrition Assistance Program (SNAP). But the amount she gets was recently cut because of a new policy to make recipients of what used to be called food stamps pay in 20 percent each month:

Before you could probably make it, but, now its even more difficult?

“Yeah. Before, we were able to make it–barely. You know, we’d have to do without–just a little–but, we could do it and it was still comfortable. And now, we have two weeks left and there’s no possible way, without this, that I would be able to feed the kids.”

Kelly and her kids live with their grandfather, Patrick Ashton, in Largo:

“We come in every month, when we really need it and get food and diapers and you know, that kind of stuff, toothpaste and shampoo. You know, stuff that you really need to run your home.”

So, what does that mean for you and your family, that services like this are here?

“I don’t know if we could do it without the help we get up here. I mean, it’s tough and I’m really thankful that this clinic is up here and I know my daughter is too. Because, they all live with me and it’s tough trying to raise a little one and an 11-year-old and a 34-year-old or 38-whatever she is anymore–it’s tough. But, I am really thankful.”

Here’s a transcript of the interview with Beth Houghton:

“The St. Petersburg Free Clinic is a social service agency that works in three different areas: in health, in food and in shelter. So, we have eight different programs under all three of those. The one we’re most excited to talk about today is an announcement about our new food bank.”

So, what’s that announcement? What’s happening with the food bank?

“We have had a food bank since 1970 and it’s been in this building, which is a two story building with an elevator and no areas for pick-up or drop-off. We’re using public alleys and so we’ve just frankly, outgrown it, in it’s physical space as well as it’s utility.

“So, the announcement is that, due to the very generous gift from Bonnie Hechtkopf, we were able to buy a building in the Lealman area of Pinellas County that is a 14,000 square foot building, on a single grade, with plenty of land around it–a little more than an acre–so that the cars and trucks and vans and everything else that comes to pick up food from us, to take it to the eventual folks who need it, have plenty of space to do that.”

So, do you think you’ll be able to serve more customers that way?

“We know we will. Just because you build it, doesn’t mean all of a sudden more food will show up, but, the fact is we were not able to cultivate more sources of food given the limitations of our size. And we know, from a few other donations that are in the wings, that we’re going to be able to, in particular, buy more, what they call ugly produce or second-level produce, to be able to bring in to this food bank. We simply couldn’t do that in our existing location.”

What’s the need like in the community? How many people out there are in need of your services to get food for their families?

“By the report of the agencies that we serve, about 60,000 people every month, come to a pantry or a low-income day-care center or someplace where they get food, that they wouldn’t otherwise get. So, that’s a pretty significant number of folks, on a monthly basis, whose other sources of either income or food sources just don’t make it through the month.”

Who is it that is using these services? Is it people who have jobs and have families and just can’t make their ends meet or is it people who live on the streets?

“And one of the things that happens, that’s particularly bad for children, is that food dollar gets stretched and stretched and the least healthy and nutritious things are purchased. In the old days we would have said “watering down the soup”, but, now what’s happening is a lot more empty carbs fill that diet instead of what sometimes more expensive proteins and vegetables and fruits. And those are things we are now able to provide for them.”

How is the need changing? Are there fewer or more people that need your services?

“Amazingly, it’s been fairly similar across the last 4 or 5 years even though the economy, here and across the country has improved a great deal, and I think that’s largely due to the fact that working people really just aren’t catching up. While the whole economy is going up, wages haven’t gone up in a commensurate way and we’re still seeing the same numbers of folks come in here, as well as into our partner agencies, if not more, frankly.”

Is there anything else that our listeners should know about your food bank or about the new facility that you’ll have?

“Well, a building is only a building. What makes the building work is a cadre of volunteers who help us sort food and bring food and donors who donate either money for us to purchase food or participate in food drives.

“So, what I would want people to know, most of all, is that us having a building is a just the beginning. We need the food to fill the building. We don’t want to keep food there, we want to move it in and we want to move it back out.

“We’re able to purchase, in large quantities, kind of second-quality produce for as little as $0.10-$0.15 a pound. That’s just remarkable. So, I would want people to know that their donations go a long, long way.”

If people want to get involved, what can they do?

“They can call here and ask to volunteer. They can also bring food here to our location. They can make donations, that we will use wisely to buy food, as cheaply as it can be purchased and get the right food to the right place, for the right people.”