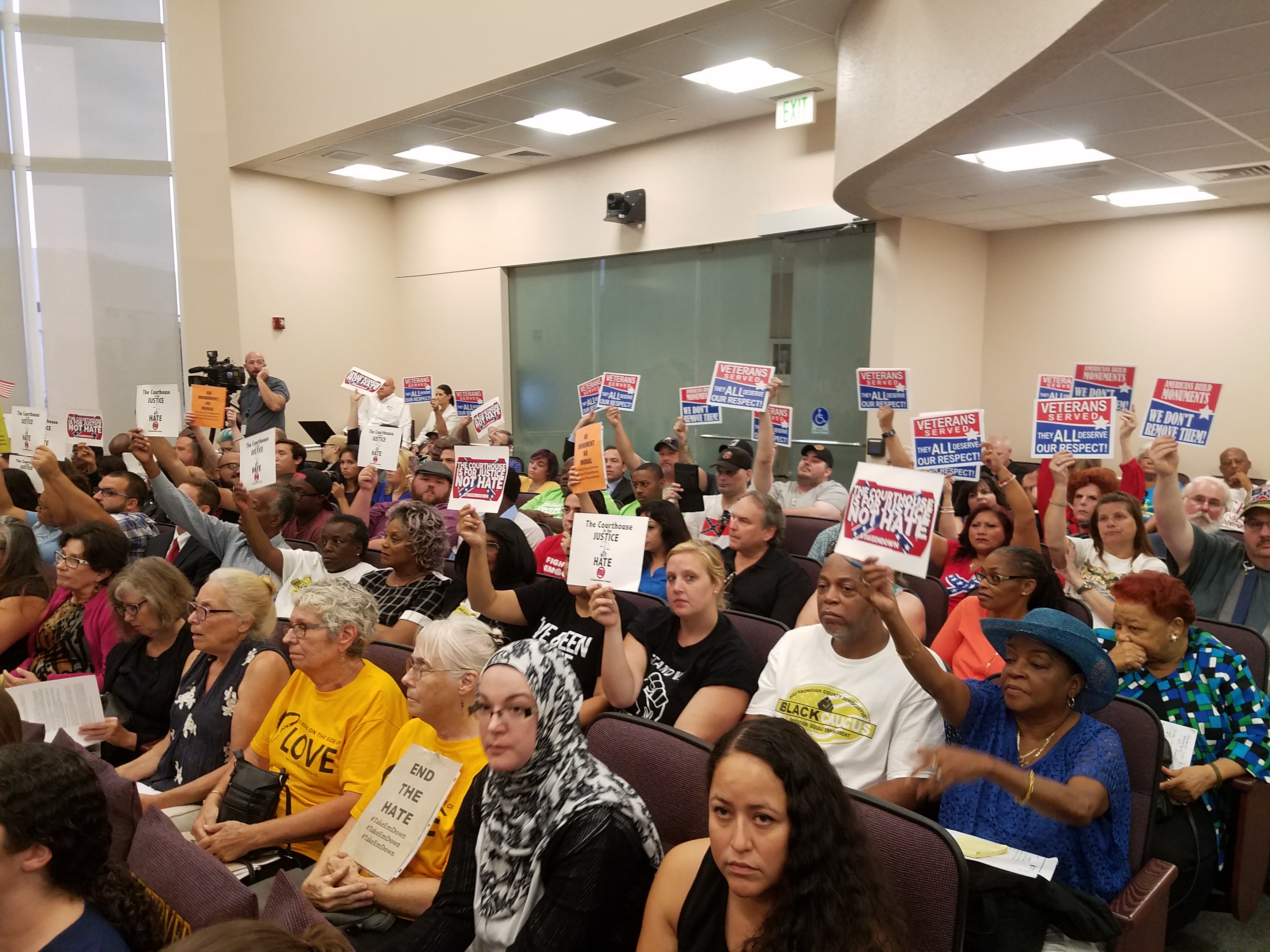 The Confederate veterans’ monument in Tampa will be moved after all; Wednesday, after overwhelming public outcry for removing the statue, Hillsborough County Commissioners voted 4 to 2 to move it.

It’s a dramatic reversal of their vote from four weeks ago.

More than 110 members of the public signed up to speak during what turned into several hours of comment. Gail Jessie, from Lakeland, was one of the few to support keeping the memorial to Confederate soldiers in its current location in front of a courthouse annex building. 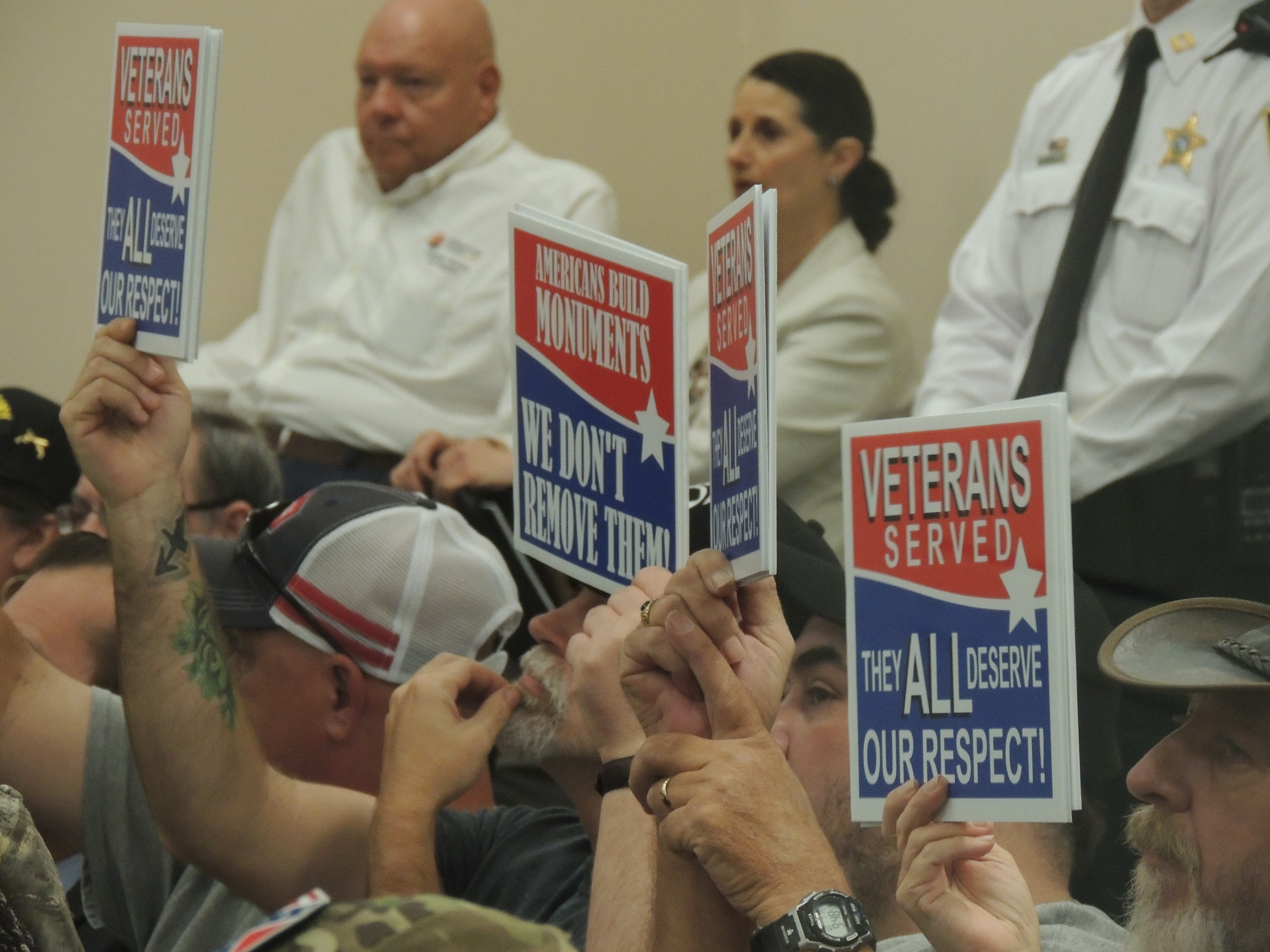 People hold signs to keep the Confederate memorial where it is. By Seán Kinane / WMNF News (19 July 2017).

“As a descendant of immigrants, war veterans, and politicians, I’m appalled that our American history is now considered something to be erased. Why has it become an acceptable practice for our country’s past history to be used as a weapon to bully people? And make no mistake, it is a weapon of bullying.

“History has never been perfect, we should know that. It is simply history of our forebears and we cannot change the injustices of the past. Our duty, as present-day generation, is to preserve our history, not erase it; to learn from our history and not repeat the mistakes of our history.”

The vast majority of public speakers supported moving the monument. That includes Darcie Fontaine, an assistant professor of history at the University of South Florida. 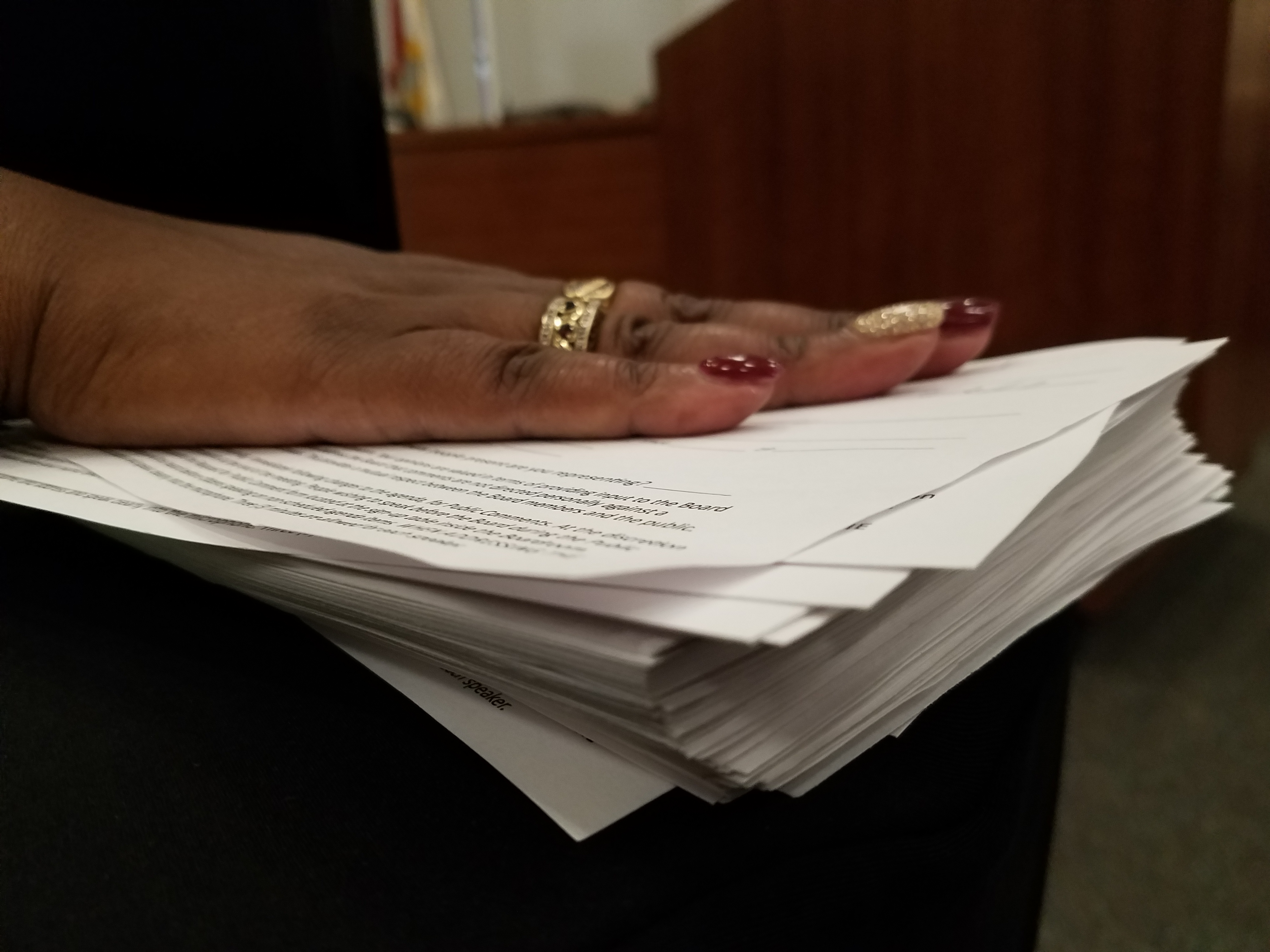 More than 110 people signed up to speak about the Confederate memorial. By Seán Kinane / WMNF News (19 July 2017).

“Voting to move the confederate monument today will not be an act of erasing the past, as many of those who oppose the move claim. In fact, as we’ve heard today, it’s very existence was an attempt to do that very thing. The confederate monument was not built as a war memorial in the immediate aftermath of the civil war as a typical memorial to fallen soldiers, like those we might see next to it for WWI or WWII. War memorials for veterans in wars such as these, typically served to unite communities or the nation in collective grief, even in divisive wars such as the Vietnam War.

“But, this was not the case with the confederate monument, as we know. The point of building these memorials, such as they were constructed in 1911 in the midst of the period known as ‘Jim Crow,’ like most of the confederate memorials across the south, was to contribute to the effort to rewrite the narrative of the Civil War and the role of the confederacy and the new narrative known as “The Lost Cause”, and specifically to remove the history of slavery from this narrative. Those who supported that narrative then and now either refuse to acknowledge or conveniently overlook the enormous amount of primary source evidence from documents, such as state declarations of secessions to the writings of the leaders of confederacy that undermine their claims. However, if there’s one thing that historians agree on–and those things are very few and far between–it’s that slavery was the primary cause of the Civil War. This history cannot be erased.

“So, this monument was erected to promote a nostalgic view of a society in which whites had control and erase the history of slavery to an invented narrative of a war that had ended 40-years earlier. However, for African Americans and those who are forced to confront this monument on a daily basis, this was a reminder of a society under which they had been enslaved, terrorized, and which those around them remembered fondly.” 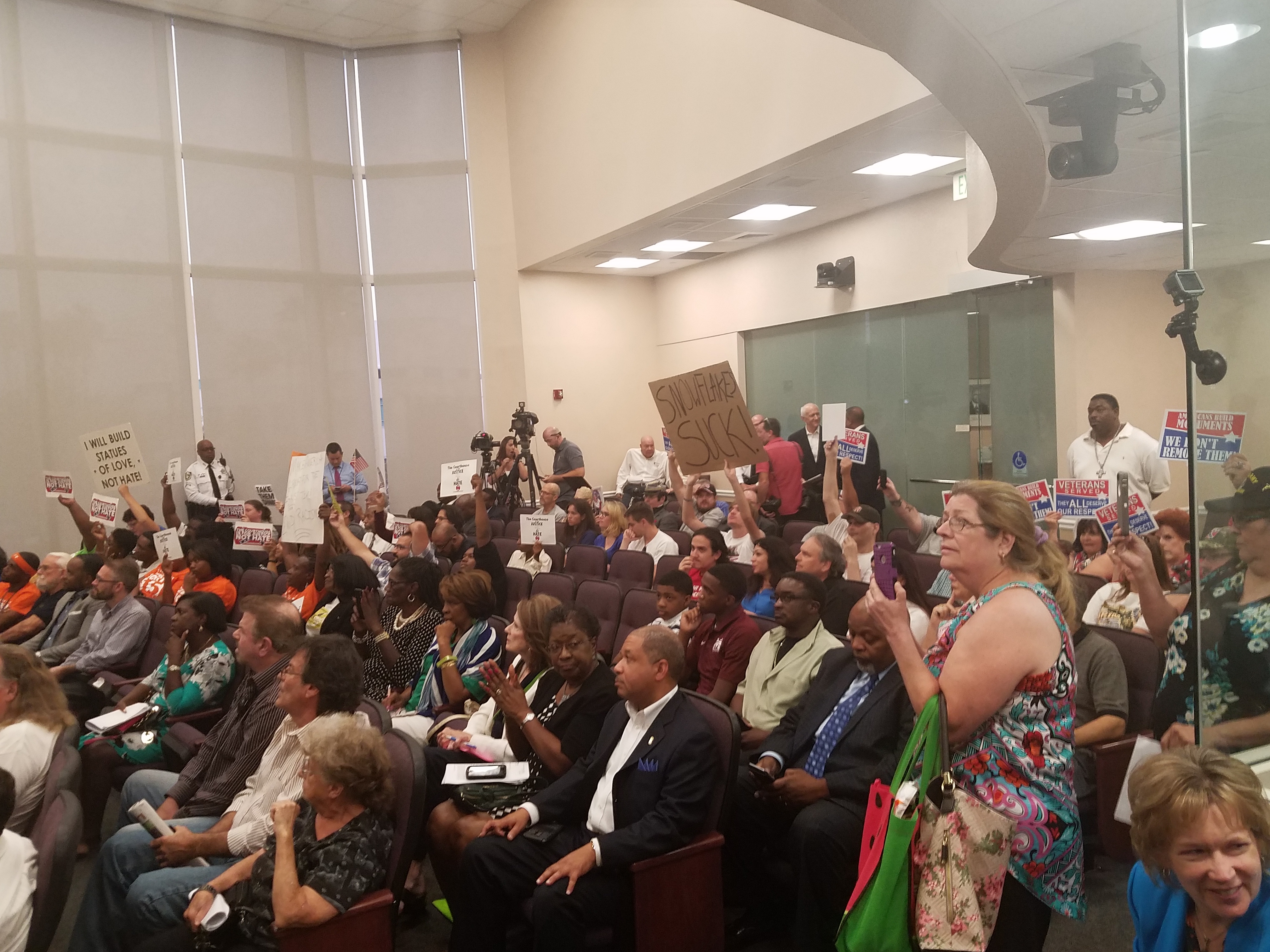 More than 110 people signed up to speak about the Confederate memorial. By Seán Kinane / WMNF News (19 July 2017).

“I’m here to talk to you today to talk about the burden of history. I moved to Florida in the 1930s. It was a very different place. I vividly remember signs outside of hotels in south Florida: “No Jews”, “No dogs”, ‘No Blacks’ – they used a different word then.

“I moved to Tampa in the early 1960s, when the schools were segregated. The black schools had hand-me-down books and the buildings were deplorable. But, all schools were underfunded. It was in the county courthouse, that I stood with thousands of Hillsborough teachers in 1968, as they demanded better funding for school children. It was in that courthouse 4-years later, that as a school-board member, I voted to integrate our public schools. And it was in that courthouse, as a State House and Senate member that I heard from constituents during public hearings.

“Now, that building is often called the ‘Historic County Courthouse’, but, it’s not a museum. It includes traffic court–the ‘people’s court’ for many–and the official records department where marriage licenses are issued and weddings performed, deeds are recorded and hearings held on property tax assessments. And yet today–and during all that history–a monument to the confederacy has stood outside; a reminder of the ignoble cause of slavery.

“The Civil War is a burden of history that we should never forget, but, never celebrate. Unlike that monument, history is not set in stone. Our perspectives change with time. I think we can all agree that the monument does not unify us, it divides us. That’s why the county no longer includes the confederate battle flag in a seal or in the county center –“

“I’m concluding. And just for a moment — And why as a County Commissioner I refuse to sign the proclamation — honoring the confederacy. I ask you today –“

“…to remove the monument.”

Commissioner Sandra Murman switched her vote from last month and today joined Les Miller, Al Higgenbotham and Pat Kemp to support removal of the monument. Stacy White and Ken Hagan voted again to keep the monument in place in front of a courthouse annex. Victor Crist was absent but indicated he also would have switched his vote.

Commissioner Al Higginbotham says he got threats because of his vote to move the monument and will forward one to law enforcement.

It’s likely to move to the Brandon Family Cemetery, possibly with the help of the United Daughters of the Confederacy. A lawyer named Tom Scarrett volunteered to start a $200,000 GoFundMe campaign to raise the funds to move the statue.