Home Blog News and Public Affairs Ferran Adria at the Dali Museum: The surreal side of real food 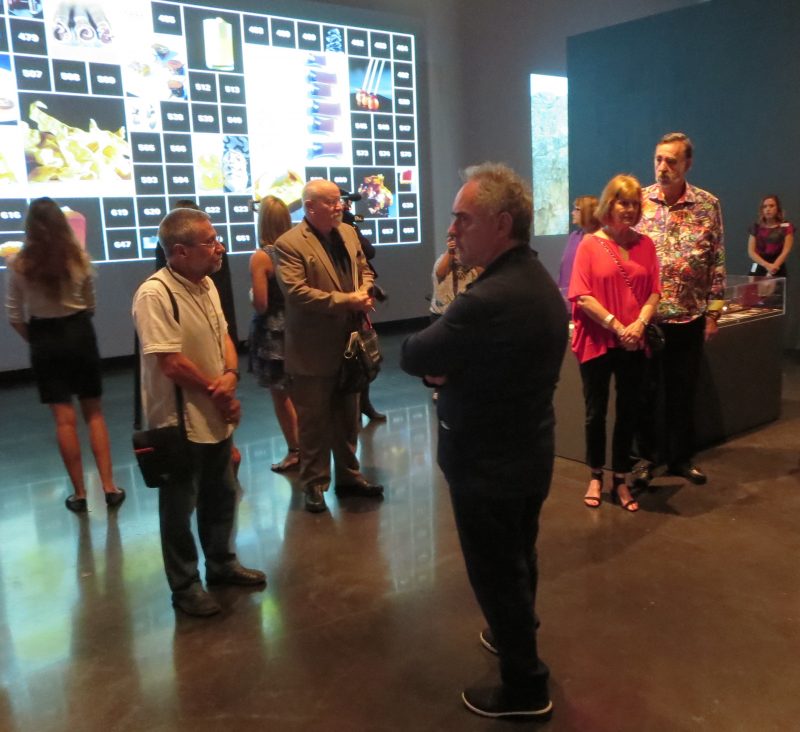 The Dali Museum has cooked up an exhibition aimed to whet all the senses. “Ferran Adrià: The Invention of Food” will showcase the gastronomic genius of Ferran Adria. He like Dali, is a Spaniard hailing from Catalonia. The exhibit plunges the visitor into a experimental culinary landscape and draws comparison to the artistic mastery of Dali.

Unless your a bona fide Foodie, you might not know who master chef, Ferran Adria, is. His former restaurant, El Bulli, nestled on Spain’s Costa Brava, garnered 3 Michelin stars. That is praise enough but, Restaurant Magazine once voted El Bulli the best restaurant in the world. Hank Hine, director of the Dali Museum in Saint Petersburg, said Adria and Dali both made enormous impacts in their fields.

“Ferran Adria is probably the best known chef in the world. And he is certainly the most influential. He is the guy who invented molecular gastronomy…and the transformative idea of having food look different than it tastes. So, in that why he is very much like (Salvador) Dali; who wanted to show the world in a kind of transformed way. Dali wrote a book called, “Le Dur et Le Mou” (The Hard and the Soft)…and if you’ll remember the melting clock is a classic example of taking something that is rigid and hard…fixed and melting it. That transformation is fundamental not only to Dali’s art but (also) to the cooking of Ferran Adria.”

Dali’s flatware and food themed paintings have been added to the exhibit. The experience is primarily multimedia centering around Adria. It encompasses high resolution photographs of his food creations. There are projections of films taken in the restaurant El Bulli during cooking as well as a first person experience of dining. The curator of the exhibit, William Jeffet, said smell and taste have also been included.

“The ham brings a little smell into it. The kind of cooking they did, of course, the smell is also part of it. I mean, taste and smell. Obviously, you see the visual part in an exhibition. My director Hank (Hine) wanted (and) had the idea of the ham because he wanted people to have one real experience to go along with all these virtual experiences.”

Ferran Adria was on hand for the grand opening of the exhibit. Speaking through an interpreter he explained why, Spanish Tapas, those small portioned plates of food which are shared by all at the table, aren’t just food.

“(Ferran Adria speaking Spanish then interpreter) Tapas in not a kind of food. It’s a way of life. It’s something fun you do with small portions that you share with friends.”

Adria said Tapas don’t work as well in the US because we have a different eating culture: we don’t share plates. Again, through an interpreter, he said the youth and the Far East are paving the way for Tapas culture in the US.

“(Ferran Adria speaking Spanish then interpreter) All the Japanese cuisine make this kind of sharing plates kind of normal. This is coming (Tapas culture) and it’s going to be very big here in the US. And Jose Andres, the other Spanish chef, is really big on it. It’s coming and it will be great and big here.”

The Dali Museum in Saint Petersburg acknowledges that experimentation isn’t on the minds of nearly 20 percent of Pinellas County residents who have inadequate access to nutritious food. They have partnered with the Saint Pete Free Clinic FoodBank and RCS Food Bank to raise awareness about and help fight hunger. Yvonne Marrullier (Marr(trill) ool-Yay), project manager at the Dali Museum, said Salvidor Dali would have approved.

“Absolutely. Dali was obsessed with…he had many obsessions…he was obsessed with food. Many the pieces we have on display in the exhibition; (like) eggs, bread, beans (are) all things needed in a food drive. He would have absolutely approved. I think he would have probably come out with some very interesting stunts, media stunts, to attract you to spread the word about our food drive.”

The city of Saint Petersburg has its own wellness program, the Healthy Saint Pete initiative. The main goal is to eradicate food insecurity in neighborhoods where healthy affordable food is lacking; often called food deserts. Kanika Tomalin, deputy Mayor of Saint Petersburg, attended the opening of the Ferran Adria exhibit. Tomlin is pleased with the museum’s efforts and said assisting the youth is a primary focus.

“There’s no question that this is a generational issue that we are tackling. We will make our most sustainable impact if we focus on children and the families with whom they live. But so much of our work that the Dali (Museum) will support through this and the great providers who work on this issue, is focused on children; and the difference that needs to be made for them. Absolutely”

“Ferran Adrià: The Invention of Food” at the Dali Museum in Saint Petersburg will run through November 27.