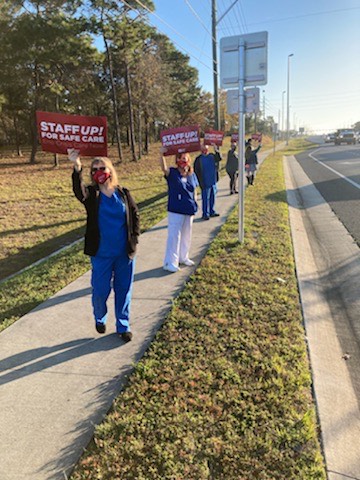 Registered nurses at Oak Hill Hospital in Brooksville will join a national day of action Thursday, January 13, to demand the U.S. hospital industry and the Biden administration strengthen protections for the nation’s frontline healthcare workers.

Amid a surge in COVID-19 hospitalizations,  nurses are holding actions at hospitals across the United States to demand material investment in safe staffing, and that other critical public health and safety measures be adequately addressed.

“As we enter year three of the deadliest pandemic in our lifetimes, nurses are enraged to see that, for our government and our employers, it’s all about what’s good for business, not what’s good for public health,” said National Nurses United (NNU) President Zenei Triunfo-Cortez, RN in a press release. “Our employers claim there is a ‘nursing shortage,’ and that’s why they must flout optimal isolation times, but we know there are plenty of registered nurses in this country. There is only a shortage of nurses willing to work in the unsafe conditions created by hospital employers and this government’s refusal to impose lifesaving standards.”

Chief Nurse Judy Preuss, who works in Oak Hill Hospital’s intensive care unit (ICU), spoke with WMNF about the planned action Thursday. “We’re joining together to call attention to this very poor staffing situation at all the hospitals,” said Preuss. “The majority of people go into nursing because they want to help people. They want to take care of people. They don’t want to abandon the bedside at this time when people need us most. But we just physically, mentally can’t do it anymore.”

Preuss has worked at Oak Hill Hospital for 17 years. Healthcare workers at the hospital are scared and burnt out, she said. “It’s frightening to go to work. People are physically and mentally ill to even come to work there,” said Preuss. “You can’t take care of your patients the way you know they need to be taken care of.”

During the pandemic, she’s seen nurses at her hospital leave the field, or leave to enter travel nursing—an industry that’s more lucrative and allows nurses to move around for short stints. She doesn’t believe the hospital, or HCA—the hospital system that owns Oak Hill—is doing enough to address staffing issues.

“We want them to look out for the safety of our patients and our nurses,” said Preuss, “rather than the profit part of the hospital business.”

WMNF contacted Oak Hill Hospital and HCA for comment about the planned rally and nurses’ concerns. As of publication, they have not provided a response.

Oak Hill Hospital is owned by the Hospital Corporation of America (HCA), one of the nation’s largest for-profit hospital systems. HCA has been criticized for turning trauma into a money-maker with its exorbitantly expensive trauma centers, and reaping enormous profits as its hospitals struggle to maintain adequate staffing levels.

“Our staffing is horrible, horrible,” said Preuss. “They [HCA] have taken very little measures to retain the nurses who have been so loyal and stayed there. Many nurses have just outright left the field. It’s a moral injury to our soul, just trying to go into that place every day.”

HCA reported over $15 billion in revenues for the third quarter of 2021. Company CEO, Sam Hazen collected $30.4 million in total compensation in 2020. According to the AFL-CIO, that’s 556 times the median pay of an HCA employee.

Oak Hill is one of 15 medical centers owned by the HCA West Florida division. National Nurses United represents nurses at 10 Florida HCA facilities, where RNs have—over the course of the pandemic, rallied on several occasions, to raise awareness about unsafe staffing, inconsistent access to PPE, and a failure to notify nurses when their coworkers test positive for COVID-19.

All 10 unionized HCA facilities in Florida approved a new contract with HCA last July, which included enhanced economic security, improvements in health and safety protections, and committee meetings at each covered facility to address staffing issues, according to the union. That came just months after Oak Hill nurses rallied to call attention to unsafe working conditions, and about a year after protesting pay cuts and possible layoffs during contract negotiations. 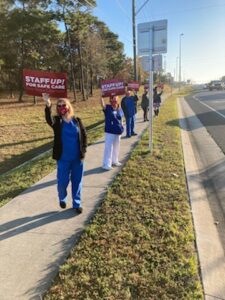 On a national level, nurses today are calling on the U.S. Centers for Disease Control and Prevention (CDC) to strengthen COVID-19 isolation guidelines—after blasting the agency for its decision to cut isolation time for healthcare workers last month.

OSHA first issued an emergency temporary COVID-19 standard for healthcare workers in June 2021. But last month, OSHA officially withdrew that temporary standard. With the omicron variant surge overwhelming hospitals, NNU says this failure to issue a permanent standard threatens the safety of healthcare workers and their patients. “The existence of an enforceable federal standard to protect health care workers is fundamental to ensuring that nurses and health care workers are given the protections they need to do their jobs safely during this surge,” the union wrote in a news release.

Leading healthcare unions and labor organizations—such as National Nurses United and the AFL-CIO labor federation have petitioned the United States Court of Appeals for the District of Columbia Circuit to order OSHA to issue a permanent standard. This call for bolstered healthcare worker protections has been echoed by 115 members of Congress, who signed a letter on Tuesday urging OSHA to issue a permanent health care standard. Twenty-one U.S. Senators have also sent a letter to President Biden and U.S. Secretary of Labor Marty Walsh.

NNU surveyed thousands of RNs in the U.S. from October to December 2021, From that, 82.5% of survey respondents said at least half their shifts were unsafely staffed. And 68% had considered leaving their positions. A recent report commissioned by the Florida Hospital Association and the Safety Net Hospital Alliance of Florida shows the Sunshine state is projected to be short nearly 60,000 nurses by 2035.

Today, NNU will also be holding a national virtual press conference, and a candlelight vigil in Washington D.C. for nurses who have lost their lives to COVID-19. 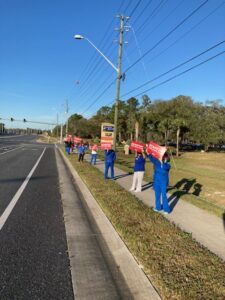