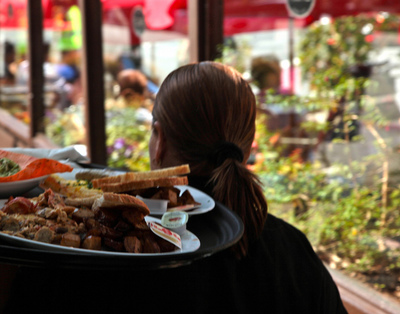 We start off today’s Radioactivity discussing the Freddie Gray case, particularly a claim circulating around conservative blogs that Gray had a previous spinal cord injury that might have contributed to his death after falling into a coma in the back of a police van. [The Washington Post reported last week] that that claim of a preexisting condition is not true.

Then we look at the minimum wage for tipped restaurant employees, which is $2.13 at the federal level and $5.03 in Florida. we listen to an interview from the Travis Smiley Show (which you can tune into on our HD3 channel) with Suru Jayaraman, co-founder/director of Restaurant Opportunities Centers United, an advocacy group for food service workers that is calling for a fair minimum wage for service workers that is the same for non-tipped employees. Jayaraman goes into the history of the service wage that is rooted in slavery and the ongoing efforts to lift wages within the restaurant industry, which are among the lowest in the country.

We also talk with Eddie Vale, Director of American Bridge 21st Century Foundation, a progressive political advocacy group that recently released a report on the influence that the conservative Koch Brothers have on politics in Florida. The report looks at Koch influence on major political figures such as Gov. Rick Scott, former Gov. Jeb Bush, and presidential hopeful Marco Rubio.