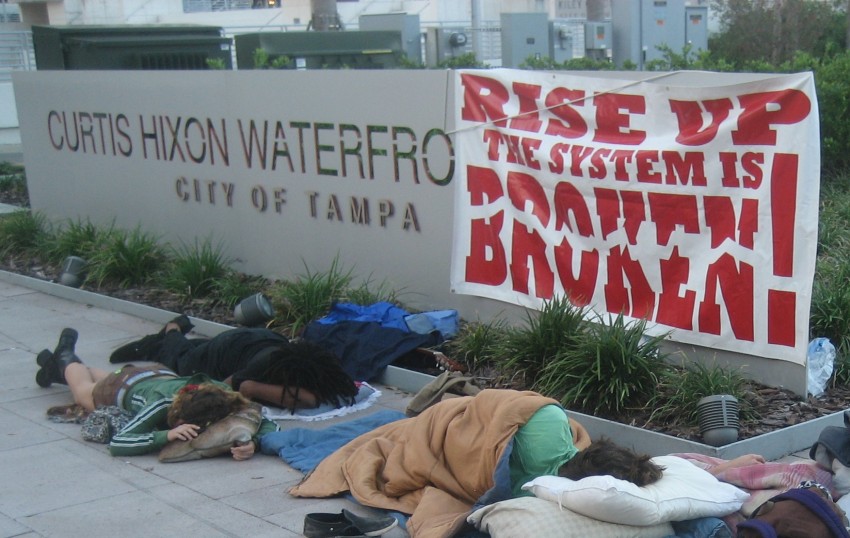 On Tuesday, the U.S. House passed the most sweeping rewrite of the nation’s tax laws in more than three decades; the vote was mostly along party lines, 227 to 203. The House now sends the bill to the Senate for an expected vote Tuesday evening. The $1.5 trillion bill would provide steep tax cuts for businesses and the wealthy and more modest cuts or increases for middle- and low-income families and could be the first big legislative victory for President Donald Trump.

According to a Monmouth University Poll, “Americans disapprove of the tax reform plan currently making its way through Congress by a nearly 2-to-1 margin.” That opposition will be seen in the form of a protest this evening in downtown Tampa’s Curtis-Hixon Waterfront Park. WMNF News interviewed Tim Heberlein, the Tampa Bay director for Organize Florida, one of the groups helping to organize the protest.

“I’m sure a lot of listeners know that there’s a tax bill, ‘Trump’s Tax Scam,’ that’s going through Congress at the moment. Looks like the House is probably going to be voting on it today. It’s just actually going to be really hurting the American people – Floridians. This is a bill that is unanimously bad for everybody and we’re out there protesting about this potentially passing through Congress and [Sen.] Marco Rubio who’s essentially sold us out over a $300 tax credit. It’s really impacting a lot of Floridians and we hope folks can join us out there.”

The tax credit you’re talking about is the Child Tax Credit. Rubio had been a holdout for a while and he said he wanted this tax credit to be a certain amount and apparently he got that amount and now he’s going to vote for the whole tax bill.

“Yeah. Well, it’s just a nice political stunt for him. He got to be the last person to hold out for this thing and basically he got to ask for whatever he wanted. In this instance, he got some really good p.r. [public relations] on it, but, he essentially sold us this tax bill, which is detrimental to predominately most people in America, except for the richest for a couple hundred bucks. So, it’s like $300 cash back on a car that’s gonna break down in 2 days, so that’s kind of where we’re at right now. We want him to know we don’t stand for that.”

It’s a tax bill, but, one of the most interesting things about this tax bill is that it repeals the Obamacare individual mandate.

“That’s going to be one of the biggest detriments to folks. It looks like about 13 million Americans will not have healthcare because of the potential impact that that repeal will have. By [repealing] that, basically it drives premiums up, so folks are gonna have to look elsewhere for healthcare, which Obamacare for them was the one of the only places to get healthcare. My son was on Obamacare as well.”

It also allows arctic drilling in the Arctic National Refuge.

“And that’s when the Senate bill came through and was going to the floor, there was so many people asking for these little pieces of their own and that was just one more way to buy one vote for a senator that has been always trying to drill in the Arctic preserve. That’s why this bill is not just bad for thousands of Americans, but, for the environment and it also guts [the] EPA and it also raises taxes for the majority of Americans, except for the very wealthy. The impact that offshore drilling has has Florida implications as well.”

The corporate tax rate now stands at 35%. Corporations hardly ever pay the full amount right now, but, that nominal amount is going to go from 35% down to 21%. How will that affect tax revenues?

“We were just looking at numbers this morning around Apple; like corporations that are sending a lot of this revenue – Apple is very infamous for dodging taxes – and I forget how many billion overseas, I guess overall is $20 billion overseas that is protected in these tax shelters outside of the country. That’s money that they are basically not paying their fair share and leaving the rest of us Americans out to dry for their desire to retain those profits.”

“This bill allows for more rewards for the commoditization of money and playing the stock market. This is huge for hedge fund managers and folks in the ultra-wealthy – the .02%. This is not something that’s going to help everyday Americans. We’re going to pay more taxes and actually get less benefits from the taxes we do pay because of the potential impact this is going to have after this bill, which is where they’re going to start looking at how they’re going to cut essential services and trim down everything that the GOP and Trump want.”

So, it’s $1.5 trillion less revenue that the government is going to be taking in in the long term. Either the deficit is going to increase or taxes will go back up, I guess, or services will get cut.

“Well, you look at who is always on the chopping block when that comes down and it’s always poor people, people of color. These programs that are helping Medicaid, for instance, we’re going to see a pretty big shift in how Medicaid is distributed out to states. Medicare: you’re going to look at potential 4% cuts to Medicare, which is the biggest ever in its history. There’s some big problems for people coming down if this bill passes and Marco Rubio sold us out for $300 of it. It’s pretty disappointing.”

And your protest today, where and when?