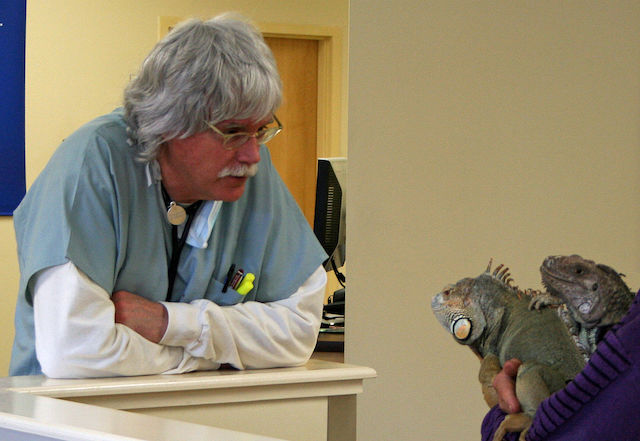 When you visit your veterinarian, the expectation is that the doctor will listen intently as you describe the symptoms of your sick pet.

But if your veterinarian happens to be Dr. Kevin Fitzgerald, you might prefer him to do the talking.

Not that Fitzgerald isn’t a caring, conscientious vet. Heck, he’s highly esteemed, and enormously experienced–he’s been practicing for 35 years.

But even if you were holding your ailing puppy in your lap, and wanted to get the dog treated as soon as possible, it’s still possible you’d ask Fitzgerald to regale you with another story from his colorful life.

Like the time the Rolling Stones’ Keith Richards gave him career advice–which he followed, by going to veterinary school.

Sure, it sounds like a fanciful, improbable tale. But it’s absolutely true.

Kevin Fitzgerald grew up in Denver, where, as kids, he and his brothers were big guys–and boxers. One day, in 1969, legendary concert promoters Bill Graham and Barry Fey saw them fight, and hired them to do security for touring bands.

“As a little boy from Denver, it was a nice way to see the world,” Fitzgerald recalled in a May Talking Animals interview.

“The first tour I was on was The Flying Burrito Brothers, a country rock act with the great Chris Hillman and Gram Parsons. From there, I did Herb Alpert & The Tijuana Brass. And from there, I did The Rolling Stones.”

Boy, did he. He worked security for The Stones on the 1969, 1972, 1978, 1981, 1989, and 1995 tours-employed by them for 25 years. He loved the experience, and loved the band. Still does. “They’re great guys,” he said, all but gushing, “and nothing happens that’s not scheduled. Working for them was kind of like working for the Army. There was a big difference working for other bands, then going to work with them, because it was so orchestrated and so organized.”

Fitzgerald explained that each band member takes on a key responsibility during a tour, and Keith Richards’ bailiwick is overseeing security and bouncers. “He pays you himself at the end of the tour,” Fitzgerald said.

When he got back to Denver, he thought seriously about Keith’s guidance, pondered his passions–“I always liked science and medicine and animals and people”–and applied to veterinary school.  “I got in,” he said. “Keith’s letter [of recommendation] is probably on a wall somewhere.”

Richards clearly saw something in Fitzgerald, even if the guitarist would, at first blush, seem a most unlikely mentor–especially if that mentoring involved an entreaty to get out of rock ‘n’ roll.

“I think I’ve been lucky–I’m kind of like Forest Gump with my life, you know?” he said, laughing heartily.  “Sometimes an older person will take an interest in a younger person, and shepherd them. I think that’s what happened to me.”

Clearly, Richards recognized significant potential that Fitzgerald wasn’t tapping while working on these Stones tours.  “Yeah, he’s the hippest cat in the world,” he agreed. “When he says something, you listen.”

Similarly, if you were in Dr. Fitzgerald’s exam room, you’d likely be inclined to listen to his stories accumulated over a quarter century on the road with The Rolling Stones. It’s very possible these could include some sordid tales–after all, this is The Stones we’re talking about, but Fitzgerald doesn’t appear to be someone inclined to bounce-and-tell.

He does share a story that played out played out nightly during those ’70s stadium shows–and presents a rarely-seen side of Mick Jagger. In those days, Fitzgerald explained, concert-goers in wheelchairs were all grouped together in an elevated section: “When the lights go off, the kids jump down and all run down on to the floor, to get closer to the stage. And you really can’t have the wheelchair people down low, because they’d get bumped out of their chairs, you’re behind a barricade and you can’t protect them.”

Still, while this arrangement was required by venues and concert promoters to ensure safety, The Stones’ camp didn’t like the way it isolated this group of fans.

“So every show, all the years I worked,” Fitzgerald remembered, “Jagger would always say ‘Where are they?’ I’d say, section 323.’ He’d say ‘How many chairs?’ I’d say ’23 chairs.’ And so I’d run him through the guts of the place, put a hood on him or a towel, and sneak him up to the place to where the kids were. He wouldn’t be able to stay and talk to them; well sometimes he would, but I would get 23 cassette tapes and 23 t-shirts if there were 23 chairs.

“And he’d run down and put a t-shirt and a cassette tape on everybody’s lap, and say ‘Thanks for coming.’ He didn’t do it as a photo op. He didn’t do it and tell anybody. He just did it. When we were walking back he’d say, ‘Did you ever think of it? How come? You have this big body, you get to bounce for us, I get to sing and dance. Why aren’t we in chairs?’

“He said “We must never forget how lucky we are.’  Here’s this guy who had such a gifted and charmed life, but he didn’t forget.”

‘I’m fifty-five but I read at a fifty-seven-year-old level’: Dr. Kevin Fitzgerald in his other life as a standup comedian

You could argue that Fitzgerald’s lived a gifted and charmed life, too.

Because if you were a patient of his–well, technically, if your pet was a patient of his–even if you’d heard all the Stones stories, or imposed an embargo on those, Fitzgerald would still have plenty of distinctive yarns he could spin, especially compared with most veterinarians. For starters, if you were in his office at Alameda East Veterinary Hospital, it’s possible you’d know that he starred in Emergency Vets, the long-running reality series that aired on Animal Planet, and was filmed at Alameda East. The hospital was also the site of a follow-up Animal Planet series featuring Fitzgerald, E-Vet Interns.

He’s spent his entire career at Alameda, and in emergency medicine. What drew him to that specialty, and kept him there?

“Emergency room doctors are kind of like adrenaline junkies,” he said. “You don’t know what’s going to come in, and you have to wear a lot of different hats. You need to keep sharp. It’s challenging…You can do the most good when you can help people. And a lot of the time, they’re not real emergencies: The dog drank the blue toiler water, and he’s going to be fine. An 80-pound Lab that ate one Hershey’s Kiss doesn’t need his stomach pumped.”

So, you might think that after the Rolling Stones stories and the reality TV star stories, Fitzgerald would be out of tales that distinguish him from other veterinarians.

You’d be wrong: he’s also a professional comedian. While in college, through the father of a roommate, he submitted jokes for Johnny Carson to use in his monologue on The Tonight Show.

Dr. Kevin Fitzgerald was one of the vets who advised the Smithsonian on its traveling exhibit Animal Connections. Here Kevin sees the exhibit for the first time, all 18 wheels of it: Animal Connections is housed on an 18-wheeler tractor-trailer that expands into a 1,000-square-foot high-tech exhibit at each stop across the U.S. The exhibit explores the connections between humans and animals (pets, farm animals, animals around our neighborhoods and communities, etc.) and introduces visitors to the job of veterinarian. It was created to mark the 150th anniversary of the American Veterinary Medical Association.

In 1986, he launched his stand-up career, and has since appeared on numerous television shows, worked with such comics as Joan Rivers, Kevin Nealon and Norm MacDonald, opened for an array of bands.

And amidst the demands of his busy day job, he manages to perform upwards of 100 corporate stand-up dates each year.  (“Veterinary medicine lends itself well to humor. One woman asked me ‘What do I give a Great Dane with diarrhea?’ I said ‘Plenty of room.’”)

And, if that weren’t colorful and distinctive enough, Fitzgerald, under the auspices of The Denver Zoo, engages in significant conservation efforts that have taken him to Mongolia, Vietnam, Botswana, Peru–endeavors that have helped protect some species against predators, have restored the population of additional species, have trained a slew of wildlife biologists and wildlife veterinarians in those locations, among other virtues.

The conservation work underscores that, when all is said and done, Fitzgerald is fundamentally an animal guy. And if you took your ailing pet to see him, you’d be in exceptionally good hands.

Still, during that appointment, there might well be some surprising, scintillating conversations along the way to sorting out what’s troubling your animal.

Click here for the unexpurgated audio interview with Kevin Fitzgerald featured on Talking Animals, May 24, 2017

This article is reprinted from Deep Roots Magazine, a wonderful site about  Roots Music & Meaningful Matters.