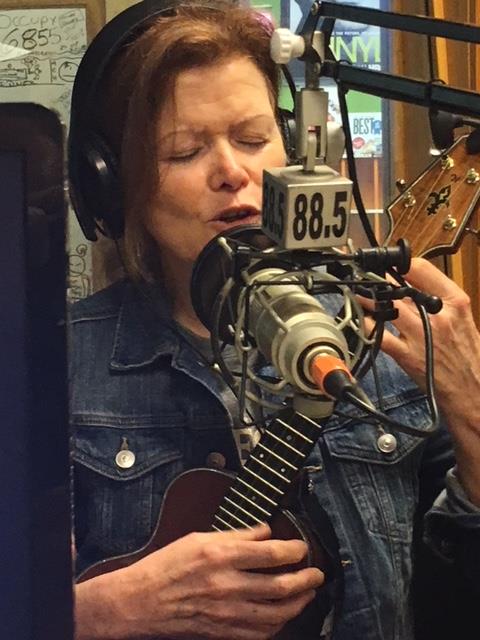 Welcome to Radioactivity. I’m Rob Lorei. Coming up— one of the leading rock journalists in the world— Sylvie Simms has interviewed and written about Leonard Cohen, Mick Jagger, Tom Waits, Neil Young, Johnny Cash and The Clash. Simmons is also a musician and she’ll be performing tomorrow night in Tampa at The attic in Ybor City. She’ll join us in a moment.

The field of rock journalism has long been dominated by men—but our next guest is one of the few women to break through. Since the late 1970’s she’s interviewed and written about some of the world’s greatest musicians—for such publications as The Guardian, Rolling Stone and MOJO Magazine. Her 2012 biography of Leonard Cohen I’M YOUR MAN is widely considered the definitive biography of the Canadian singer songwriter. She’s also a musician and she’ll be performing this week in Tampa. Sylvie Simmons- welcome to WMNF.

She says:
“Leonard neither wanted a book about himself or asked me to write it; nor did he ask if he could read and approve what was in it. But none of these stopped him from giving his support. If I had not had his support, it would not be the book it is. In the beginning, I’m sure he must have been in two minds about it – he is after all, as you know, a quite shy and very private man.” https://www.leonardcohenfiles.com/sylvie-iv.html

The New York Times review of I’m Your Man says: “Simmons has deftly narrated Cohen’s evolution, bringing the past into the present and reminding us of the breadth of the journey. “I’m Your Man” is an exhaustive biography, an illumination of an artist who has repeatedly said he’s not much of a self-examiner. Among the book’s side effects is that it sends you back to the source material; as you’re reading, you find yourself craving Cohen’s music in the background. In her interview excerpts, Simmons captures the elliptical nature of ¬Cohen’s speech, the wry turns of phrase that are almost like stand-up comedy. Behind it all are a smirk and a wink; you know that Cohen knows how absurd it all is.
And in the end, this biography has the oddest effect: as soon as you finish reading it you feel an overwhelming impulse to go back and begin again….”
Source: https://www.nytimes.com/2012/10/14/books/review/im-your-man-leonard-cohen-bio-by-sylvie-simmons.html