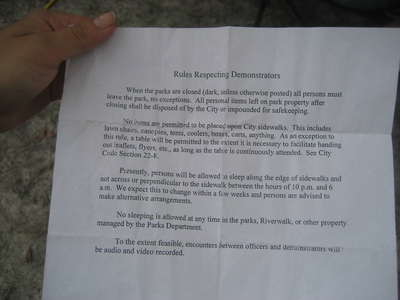 Friday morning police told Occupy Tampa to take down parts of their sidewalk camp outside Curtis-Hixon Park. Tables and canopies have been removed, but the protesters are still allowed to stay and sleep.

Last Sunday night a police officer told Occupy Tampa that they could stay on the sidewalk. But two nights later police told protesters they had to leave the sidewalk along North Ashley Drive. But they later backed down. Last night a protester named Pepe said he was excited that the group had won this battle.

“On Tuesday we had an officer come and say we couldn’t be here. We had our lawyers contact the city lawyers. ACLU contacted the lawyers, and they worked it out, and we can be here.”

But at 9:45 this morning Tampa Police Captain Brian Dugan told protesters that tents and canopies were not allowed.

“And the agreement was that at night they would be allowed to be here. There was never an agreement to set up tents. Ok? Please advise your clients if you represent them they get up their stuff, and move it. They need to pack up the tents, they need to get their stuff, the tables, the chairs, that please be removed.”

Although the protesters weren’t asked to leave, organizer Blake Westlake said they would have been arrested if they did not take down the canopies that went up yesterday.

“I woke up and there was one tent, I went to the library to charge my laptop and there was two tents. I went to the bathroom, and now there’s three tents. It’s like every time I leave we have more tents. So, it’s awesome that we have them. Now we actually have room to set up a proper kitchen, we have a library now, and the media table, so things are coming together really nicely.”

A woman who called herself Topaz said that the sidewalk was beginning to feel like a home for Occupy Tampa. She never expected they would be told to take the tents down.

“So far, we’ve been lucky that the last two nights we’ve won a victory, but I’m not worried. I mean I’ve been sleeping out here at night. They had one night for us to walk around. They rescinded what they said the night before, and then they said, ‘ok’ because we caught ’em on youtube, so no. I’m really not worried about that.

Last night she was harassed by members of a film crew from 93.3 FLZ radio, who hit her on the head with a protest sign as they were dancing around and mocking. She was not happy with their actions.

The General Assembly voted to black out any media who behaves that way. This morning they refused to give interviews to NBC’s Tampa affiliate.

Laura McElroy is the public information officer for the Tampa Police Department,

“We do not want to arrest anyone. How long has it been, 7, 8 days? I think we’re the only city in the nation that has not had a confrontation or an arrest with an Occupy protester. That isn’t an accident. That’s by design. We support and protect people’s civil rights, that’s why we have not had an arrest.”

Today Siobhan Harley from Tampa Mayor Bob Buckhorn’s office Tweeted that the Mayor did not order the police to arrest protesters and that the Occupy Tampa protesters can stay as long as they don’t have tents. But McElroy said that even allowing protesters to sleep on the sidewalk is a lenient interpretation of the law.

The police cited city code section 22-8 and footnote 14-41, which state that It is unlawful for any person to place in or upon any place, street, sidewalk any article or thing without a permit, and that assemblies may not obstruct sidewalks. But Occupy Tampa’s legal team thought that only 4 to six feet of sidewalk needed to be clear for other pedestrians. And their attorney Rugh Cline has sent a court case entitled ACLU of Nevada vs. the City of Las Vegas to the police. The case ruled that city ordinances prohibiting solicitation and the erection of tables restricts free speech. The group has not indicated whether they will sleep there tonight, but members of Occupy Miami and Occupy Orlando will come to Tampa tomorrow to join in the United for Global Change event on Saturday at Gaslight Park.