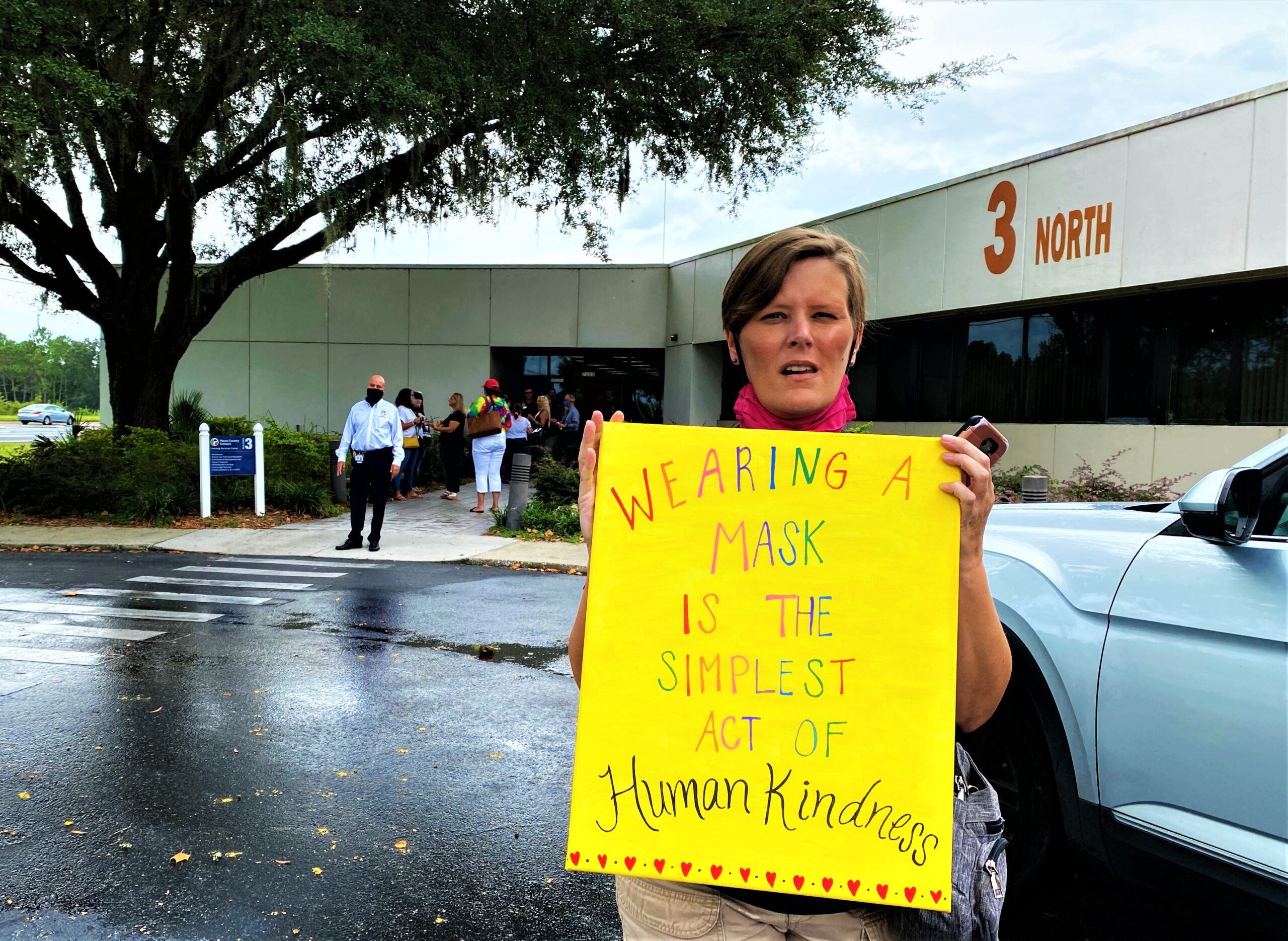 Parents with opposing views on mask mandates clashed at a Pasco County School Board meeting today. Pro-mask parents honked horns and rallied in cars, prompting faculty to turn up the volume inside.

Nearly 20 cars circled the parking lot just off Land O’Lakes Boulevard. School board meetings aren’t generally known for excitement, but the question of whether or not to mask children has brought the fight out.

Outside, two SUVs driven by anti-mask parents blocked the circling vehicles. One man got out and confronted a woman whose vehicle was adorned with a sign reading “Follow the science, not DeSantis.”

She said she was following science and the masking recommendations of the Centers for Disease Control and Prevention. He said he was using common sense, eventually walking away and calling her a “brainwashed communist.”

Pro-mask parents have been pushing for mandates with renewed fervor. A Leon County judge last month ruled that Gov. Ron DeSantis’s executive order threatening to penalize school districts for implementing mask mandates without a simple parental opt-out was an unconstitutional abuse of power. But the Governor appealed the ruling which has prevented it from taking effect. A hearing is scheduled for Wednesday that could result in the judge’s ruling going into effect.

Pasco has had more than 3,000 student COVID-19 cases this year and no plans to move from its masks-optional stance. But parents like Kimberley Cox want that changed.

“I care enough about your children to do anything for them,” Cox said. “I’m literally asking you to put a mask on your face and have the teachers and the students and the bus drivers and all the staff put a mask on theirs.”

Another parent, Alicia Zilay, gave board members a petition asking for a mask mandate. She said she’s collected about 2,000 signatures so far.

More than a dozen districts around the state have so far defied DeSantis’s order, including the state’s largest districts. The mandates come as the more transmissible delta variant of COVID-19 – along with lax regulations in Florida – have brought the pandemic to new heights.

Inside the meeting, the mood was just as tense. The meeting was briefly paused when one parent, Joseph King, accused another of pushing past him and spoke out of turn during the meeting, cursing at board members until he was removed. He was later allowed to speak and return, despite telling law enforcement officers he would “handle it” himself if anything happened again.

More confrontation spilled over after the meeting, causing law enforcement to ask some parents to leave or face arrest, but all dispersed without incident.

According to the Pasco School board calendar, the next meeting will be held at 6:30 on Sept. 14.