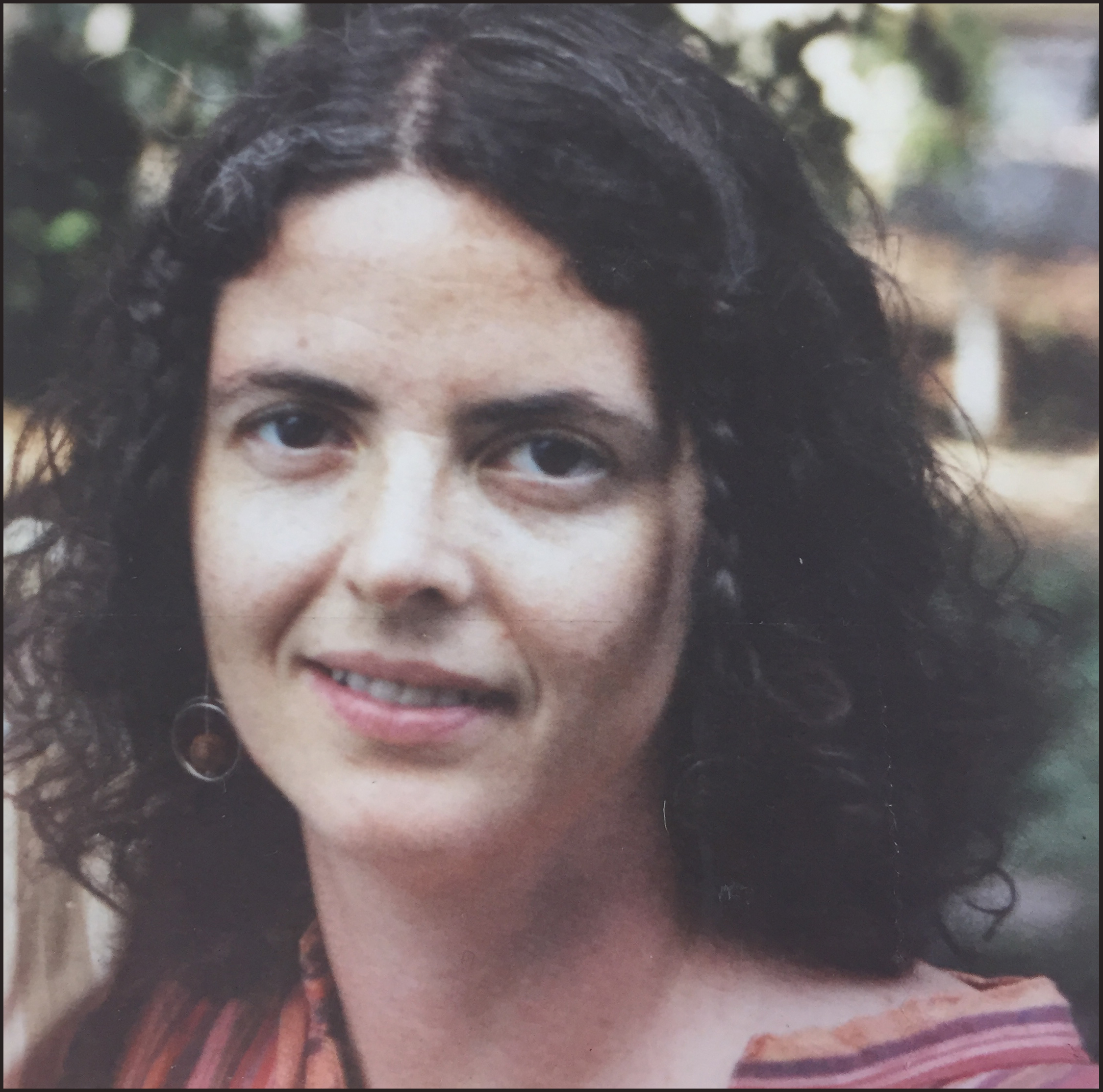 Any new music lover in the early 1980s had an appointment with their radio on Saturday afternoons to listen to Radical Noise. This groundbreaking punk, new wave, alternative music show was a fulcrum of the local new music scene. Pam Wiener and John Dubrule were Radical Noise, godparents and cheerleaders to emerging new wave and punk bands. 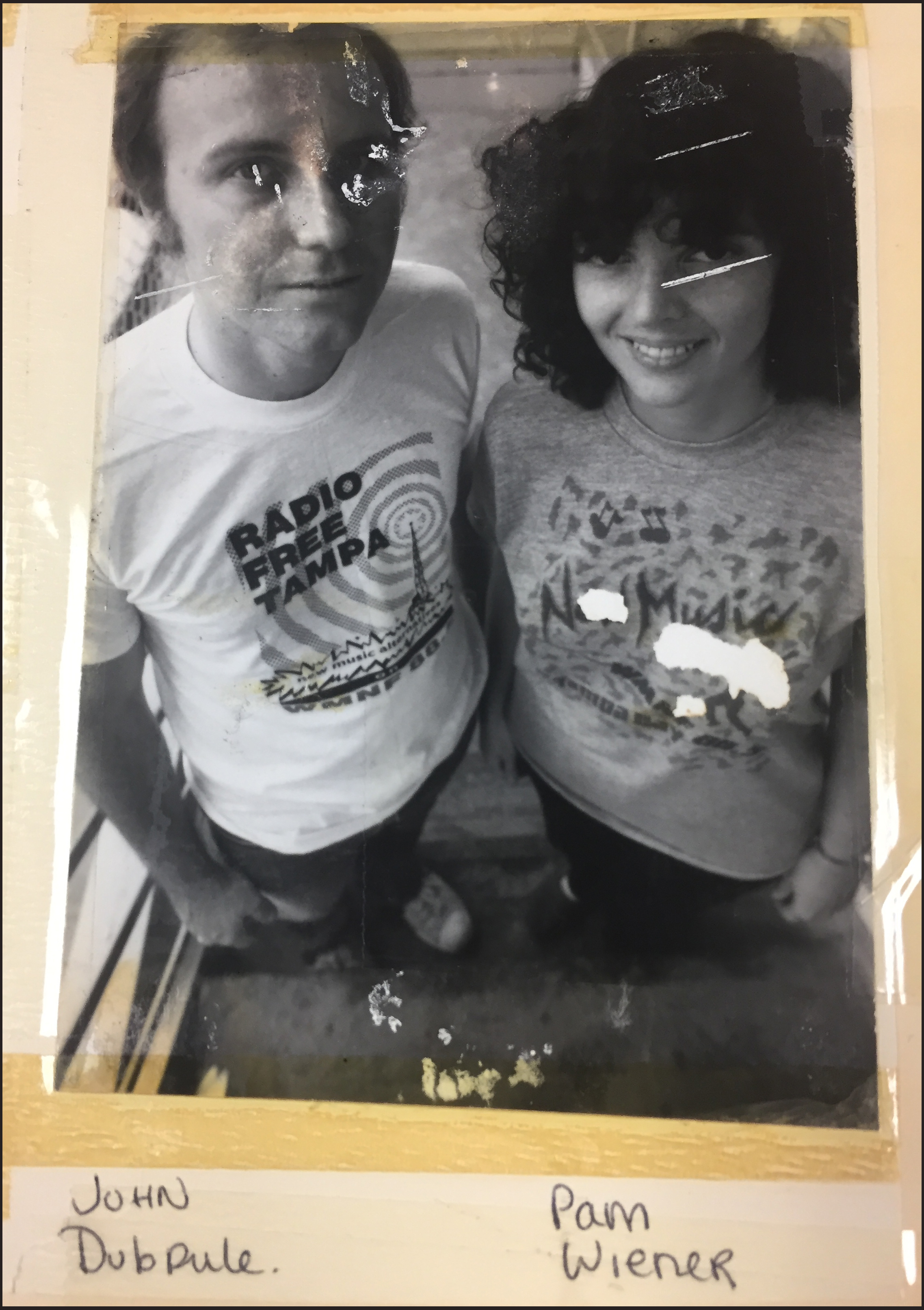 A decade later their tastes shimmied and danced their way over to more of a world beat, and Sound Safari was their WMNF program. Again, they were a mile ahead of everyone with their omnivorous musical taste, and dedication to the scene. They were part of starting the Nairobi Nightclub, a moving party of world music & Afrobeat, instrumental in bringing global musicians to Tampa Bay, and in turn, influencing local bands. 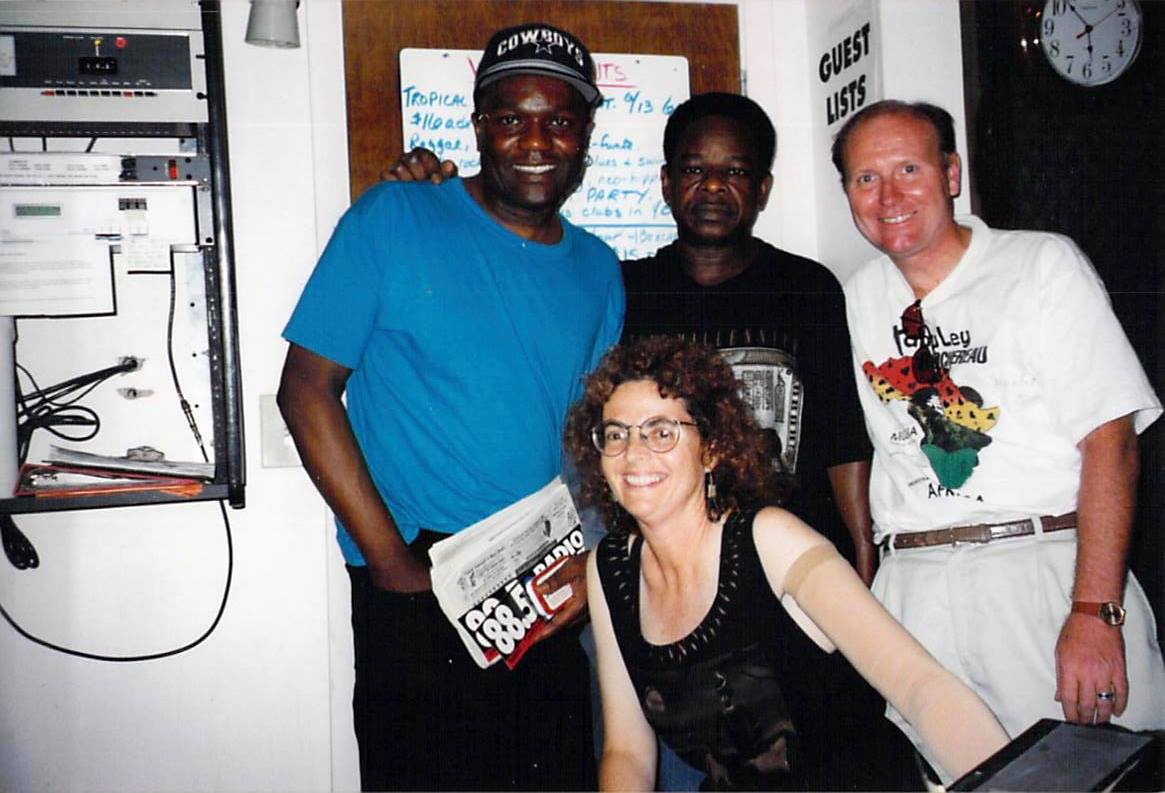 Pam is here with Sam Mangwana and Ricardo Lemvo , Both African Music stars at WMNF radio where she was interviewing them for the Sound Safari.

Pam Wiener Dubrule passed away in December after a long battle with cancer, leaving John, and daughter LiLi.

A newspaper article about Pam was titled, This Lawyer Doubles As A Rock DJ. 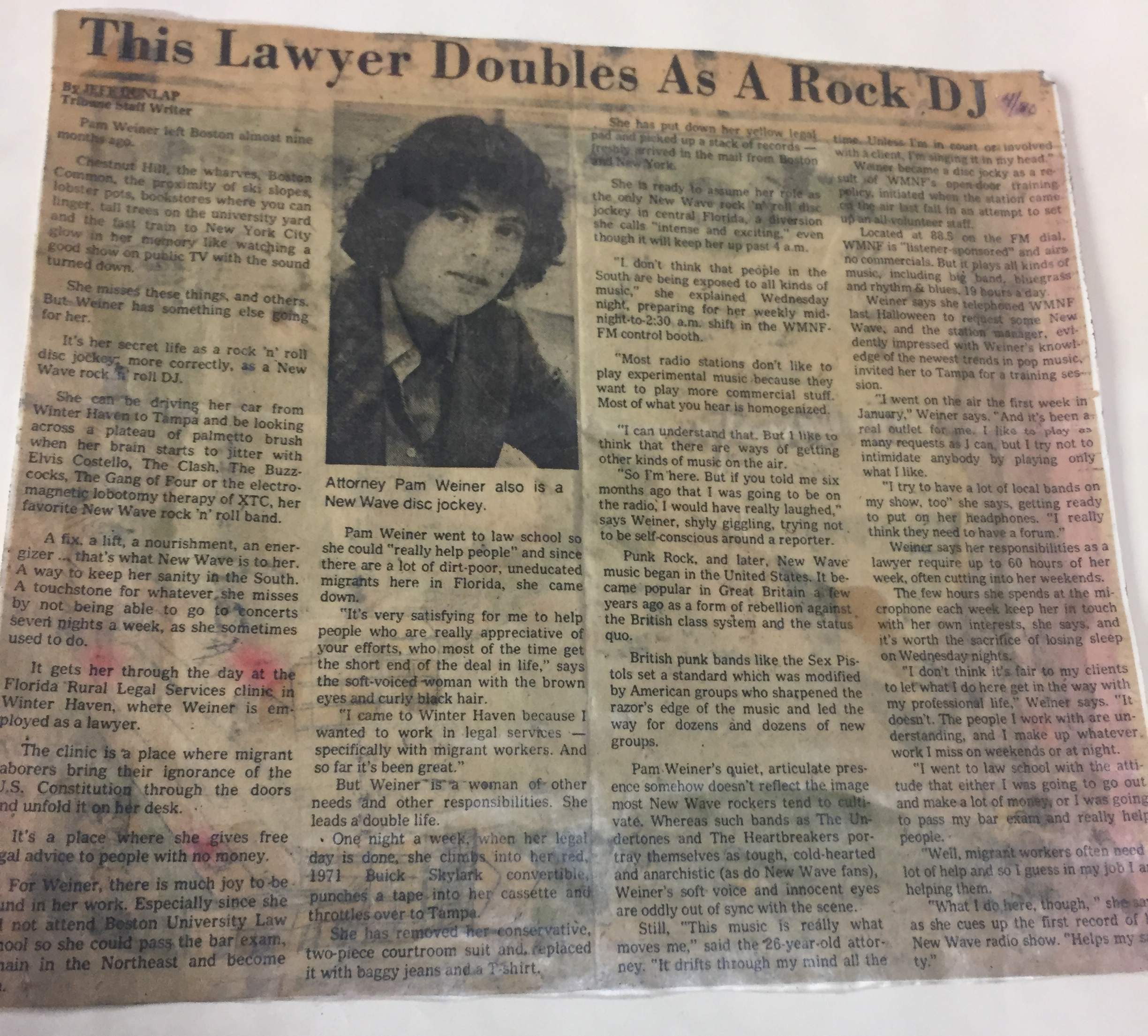 Pamela Wiener’s musical taste dovetailed with her life. Her work as a lawyer focused on helping people who were often not part of the mainstream, easily overlooked or dismissed. She worked at Gulf Coast Legal Services for more than three decades. Her focus included working with Florida’s migrant workers, the homeless, the disabled. She wrote in a Facebook post,

I really care about my clients–not just as clients but as people. I try to assist not only with their primary legal issue but any other barriers they have to obtaining safe stable housing, health care and a steady income.

There will be a memorial service for Pamela Wiener Dubrule on Saturday, January 12, from 2-4pm. John has asked that in lieu of flowers, please make a donation in her name to the Florida Holocaust Museum, WMNF, DayStar or Lustgarten, research for Pancreatic Cancer. Here is a link to her obit.

On a personal note, I will never be able to thank Pam and John enough for all they have done for our community, and all they have given me with music.

Below are a couple of  pictures from the earlier WMNF years, with Pam and John. 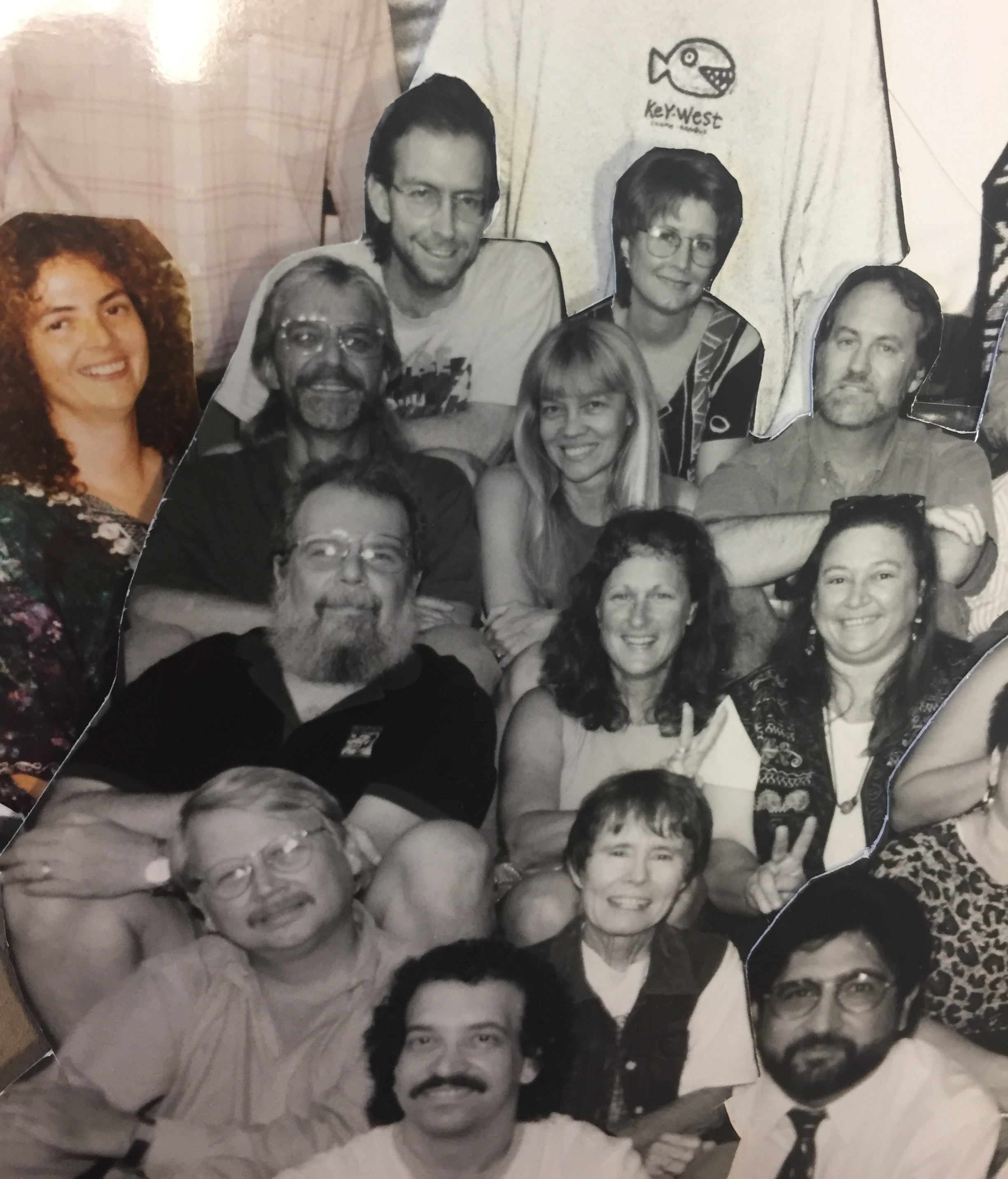 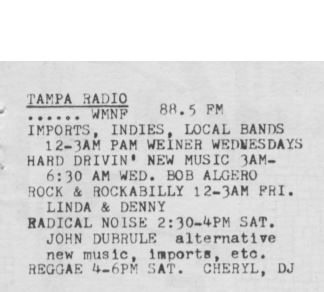 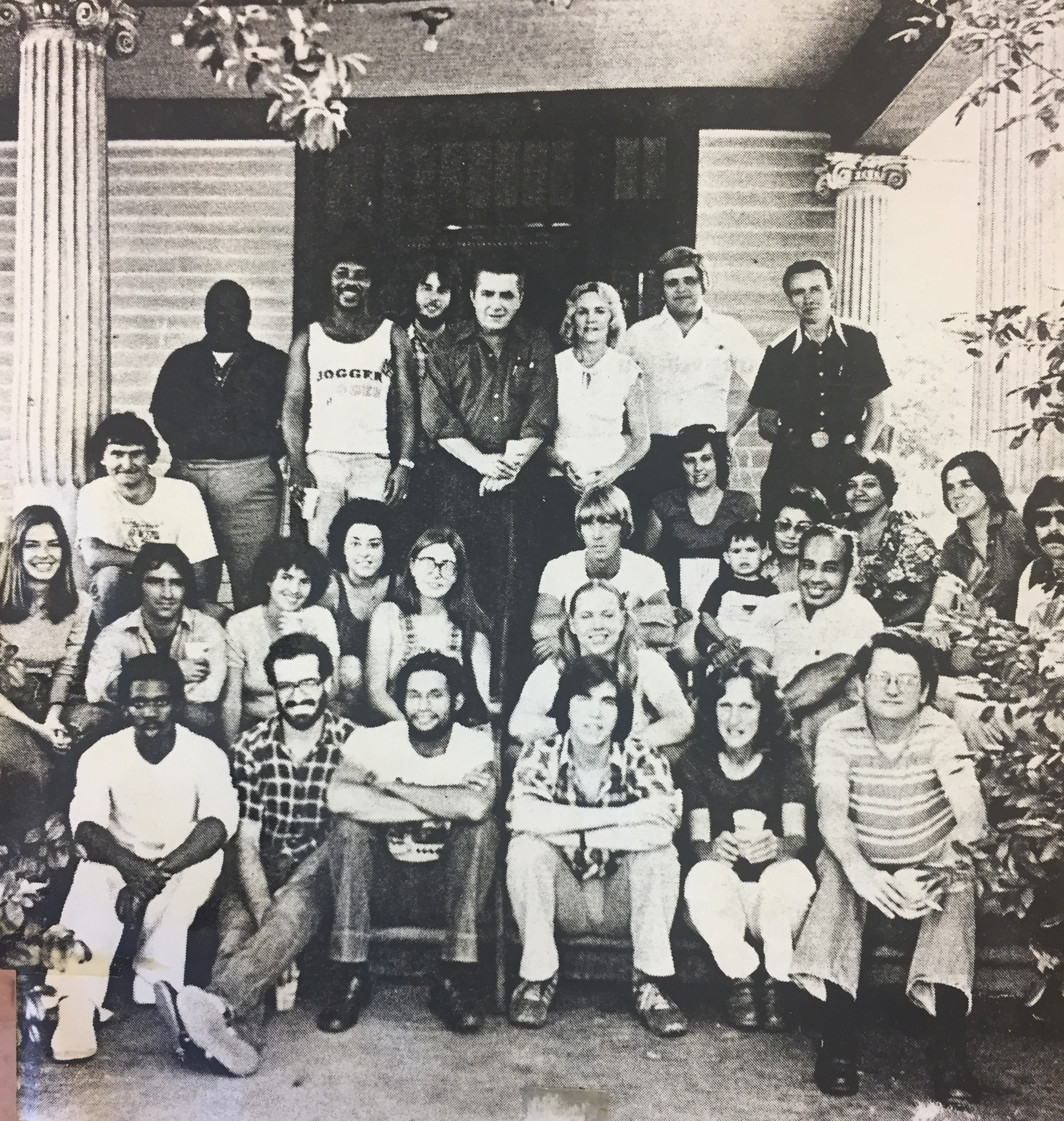