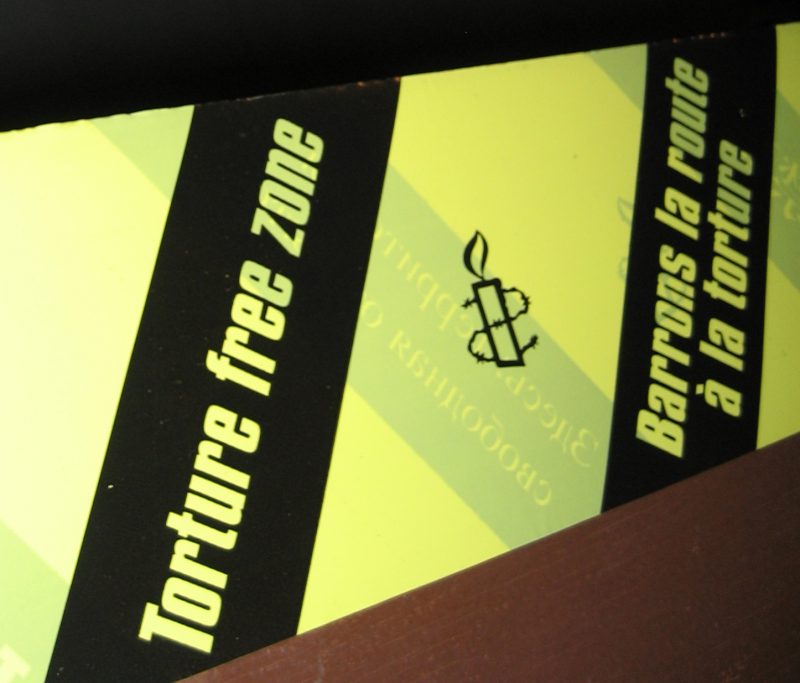 Update Thursday 2 June 2016: Abu Zubaydah is in the courtroom today and is expected to testify. According to the Twitter feed of Miami Herald‘s Carol Rosenberg, another witness is saying that both he and Abu Zubaydah continue to be subjected to torture at Guantanamo prison.

A Guantanamo Bay prisoner who was tortured in U.S. captivity may get a chance to testify about his treatment as soon as this week; the 2014 U.S. Senate report on torture mentions dozens of times Abu Zubaydah was abused. He’s been called as a witness by a defendant in the September 11th war crimes case to talk about allegations of torture at the Guantanamo prison. Abu Zubaydah’s brother, Hesham, lives on the east coast of Florida, in Brevard County and WMNF News spoke with Hesham’s wife Jody Abu Zubaydah.

Here is a link to WMNF News’ December 2014 interview with Jody Abu Zubaydah about the U.S. Senate torture report and what it says about abuse her brother-in-law endured.

Here is our May 2016 interview about being called to testify:

“Looks like they subpoenaed him to be a witness for someone else, who has raised up the allegations of abuse in Camp 7.”

And Camp 7 is this high-security unit at Guantanamo Bay. What do you know about what types of abuse your brother-in-law has suffered?

“He’s been waterboarded, he’s been… a whole bunch of different torture techniques that are really barbaric.”

According to the Senate torture report, Abu Zubaydah was treated so badly that CIA officials cabled to their bosses to make sure that he’ll stay in isolation and incommunicado for the remainder of his life, so that he can’t tell that story. But, now it looks like he might finally get a chance to say what happened. How is that important for people to learn what happened to your brother-in-law–about how he was tortured and about his chances of getting out of prison?

“But, for him to be able to speak is perfect, because, no one’s really gotten the words. Lawyers can’t say anything. They have a strict policy on what lawyers can tell the public. Journalists only have limited information and the CIA torture report is ‘missing’ now or ‘it’s gone’ and that’s just the CIA’s version. So, for him to be able to speak is really good and hopefully he’s not being threatened when he’s on the stand, like if he says something about ‘our previous guards…,’ no one really knows what goes on, where he’s at.”

So, does that make you more nervous for his safety or do you think it will be, overall, a good thing if he does get to testify?

“I think, no matter what he does, his safety is always going to be in question. So he has nothing to lose by talking.”

Based on what you learned from the media and from talking to his lawyers-and I don’t know if you’ve ever had a chance to communicate with him directly, but–what do you see as his fate? Do you see him having a chance to get out, any time?

“No, I don’t. And I get that from Red Cross. I don’t really talk to his lawyers anymore. Barely, on LinkedIn we talk, but, it’s more we send food and everything else through the Red Cross and that’s our communication. My feeling on him is that he’s going to be in there for life, without charges.”

When he was captured, the CIA thought that he was a senior member of Al-Qaeda, but, now he’s just considered an Al-Qaeda ‘facilitator’. What do you know about your brother-in-law’s relationship with Al-Qaeda?

“I am not too sure. I don’t really like Al-Qaeda. I think that any kind of involvement with them is bad and I don’t think any–not this bad, where you get tortured and locked up for life with no charges–but, his relationship with them, I have no idea.

“You can go by his diaries. The first set was released by Jason Leopold. If you go by them, then he was involved, but, not as deeply as everybody said, at first.”

So, would you feel comfortable then, with those charges coming out in a court and then, if your brother-in-law is guilty, he could get a sentence and have to serve time?

“Yes. That’s what everybody wants, to press charges.”

But, that’s not happening?

The rest of his family, your husband and his blood relatives, have they been able to react to the news that your brother-in-law might testify at Guantanamo?

“His family doesn’t know. My husband knows, he says: “Good.” But, as far as his… they don’t like talking about him. So, it’s really hard to bring up. We communicate a lot via WhatsApp and they don’t talk about him too much and if they do, it’s crying.”

Where do they live?

“They live in Saudi Arabia.”

Well, those are my only questions. Is there anything else that you would like our listeners here, in Tampa Bay and anyone who happens upon this story on the web, to know about your brother-in-law?

“You know, the main thing is ‘innocent until proven guilty’ and he hasn’t even been up into a court of law. To be treated like this, for anybody–and I know it happens, not to the extent that he was done, but, I know that torture and abuse has happened within our legal system here–so why would anybody think that it wouldn’t happen even worse, over there, when they have no means of communication. So, if it happens here, then it’s going to definitely happen over there.

“Nobody deserves to get treated like this. He needs to be charged; he needs to be convicted or whatever happens–found not guilty; guilty; reason of insanity–who knows. But, that opportunity isn’t coming.”