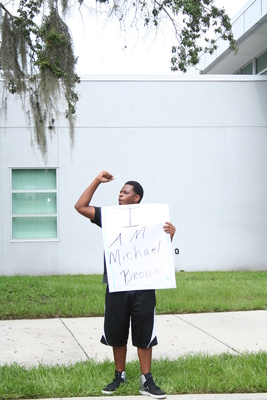 The recent shooting and death of Ferguson, Missouri teenager, Michael Brown, has shaken the St. Louis suburb, as well as the African-American community’s sense of security around the nation. While police and protesters continued to clash in Ferguson, WMNF’s Crystal Farina reported on Tampa’s own demonstration over the weekend.

Around thirteen people gathered in front of The Tampa Police Department on 22nd St., near Ybor City.

The crowd chanted what has become the motto for demonstrators in Ferguson. Connie Burton, a Tampa resident and member of the Black People’s Advancement and Defense Organization, led the majority of the two-hour protest. Some expressed disappointment in its small attendance, but Burton held her bullhorn high and continued to orate toward fellow protesters, passing cars and the apartments facing the TPD.

“One person standing up for justice is a great thing because to sit down is approval.”

“We’re here today in solidarity with Michael Brown and those community members in Ferguson, Missouri that are standing up and speaking out against police harassment, police brutality. It isn’t just Ferguson where this is happening. It’s happening in Los Angeles, it’s happening in New York, it’s happening in St. Petersburg, it’s happening in Tampa, Miami, Atlanta… all over this country, people are targeted by police, a highly militarized police…”

Burton added to Wright’s concerns of police militarization, particularly during last week’s eruption between police and what have been reported as mostly peaceful protesters in Ferguson.

“When Ferguson, Missouri people looked at the situation and said that killing our son was not something we was gonna tolerate anymore, we saw sniper rifles, we saw military artillery, we saw police, as if they was ready to go and fight people in Afghanistan.”

“I’m here today because I’m very concerned about what’s going on in Ferguson. And I heard yesterday, up to 100 cities in the United States had protests like these. And this is just starting out, you know this tragedy happened a week ago, but we’ll probably have weekly protests, I don’t know if they’ll always be in the same location, but from there, you know people will invite their friends, their family, and the movement can grow from there.”

The New York Times reported racial disparity within a variety of authoritative positions in Ferguson, with its police department at the forefront. Three of the fifty-three police officers are African Americans. Mother Jones, another publication, claimed that pointing out such disparities may actually harm Blacks. Burton, the event’s leader, offered some insight.

“People have to be honest and we gonna have to have a real honest conversation about racism in America and see how it got us trapped and continues to have a stronghold.”

“We as the people need to stand up, according to that preamble of the Constitution. ‘We the people of the United States’, that’s who needs to do this.”