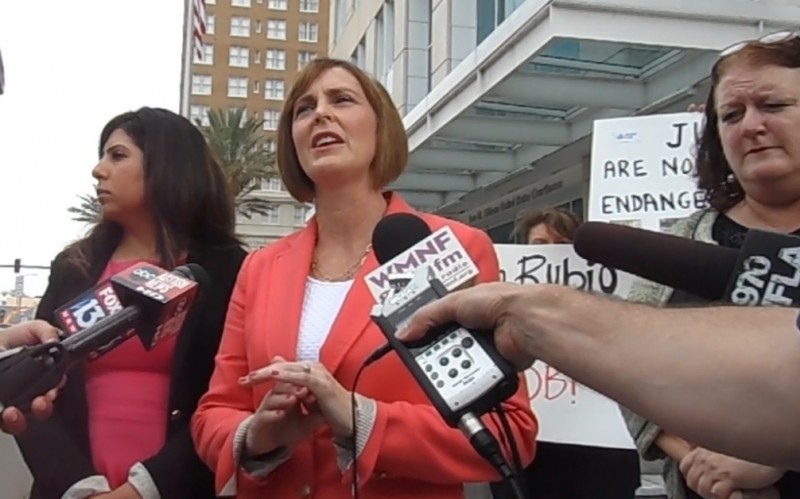 Illinois Senator Mark Kirk is breaking with leaders of his Republican Party and meeting Tuesday with Supreme Court nominee Merrick Garland. Most Republican leaders say they won’t hold hearings or vote on Garland but Kirk is in a tough re-election fight in a blue state. During a press conference Tuesday morning outside the Federal Courthouse in Tampa, U.S. Congress member Kathy Castor said other Senators, like Florida’s Marco Rubio, need to hold hearings and vote.

Listen to the whole story here:

“This is clearly their fundamental responsibility, under our United States Constitution. And here are a few facts: There are 300 days left in the current administration, under President Obama. Every Supreme Court nominee, since the 1980s has had a hearing and a vote within 100 days.”

Senate Majority Leader Mitch McConnell insists there will be no hearings and no vote until after the next President is elected and takes office in January. He says American voters need to weigh in first, but Castor says they already have.

“Well, the American people have had a say, haven’t they? This is the way government works. Every four years we elect a President. Typically during a Presidential term, there could be a vacancy on the Supreme Court. The Constitution says the President then nominates and the Senate will vote. And that’s the way our democracy works.

“And once someone throws a wrench into the democratic process, we’re no better than countries with dictatorships. We are a country of laws, not men. We’re not a country where people just get to decide willy-nilly. We base functioning government on a constitutional framework. And the Republicans in the United States Senate have to fulfill their duties and follow that framework.”

“And there are many important cases on the court’s docket right now. Issues from abortion, contraception coverage, immigration and deportation, labor rights, a whole host of cases, right now, that may not be able to be resolved this term. They may need to be held over to next term. If the Senate doesn’t act now, it could affect this term, it could affect next term, because the next President wouldn’t be in place well into October term 2016. And if they create such a backlog, maybe it affects even into a third term.

McLauchlan points out that three justices are now 80 or older so this year’s presidential election is still likely to have a large impact on the future of the Supreme Court even if Merrick Garland is confirmed soon. But that’s not going to happen if Senate Republicans refuse to hold hearings.

“We are here today, to draw attention and ask Senator Marco Rubio to please do his job. It’s his Constitutional requirement to fill these vacancies and we ask that they do so. That is why courts matter.”

Not having a full court could mean some cases will be deadlocked in a 4-4 tie. Anna Eskamani, with Planned Parenthood of Southwest & Central Florida, says that hurts women.

“It’s obvious that women deserve a full court. Just this past month we heard oral arguments for arguably one of the largest cases on single access to abortion since Roe v. Wade. Last week we heard a case on oral contraception. We deserve a full court. And it’s time that the obstructionist mentality in Tallahassee and in D.C. stop immediately.”

According to AP, Senator “Kirk is one of just three GOP senators who have called for Senate Judiciary Committee hearings on Garland and one of two saying the full Senate should vote. At least 13 Senate Republicans have said they’d be willing to meet with” the man President Obama has nominated to the Supreme Court.