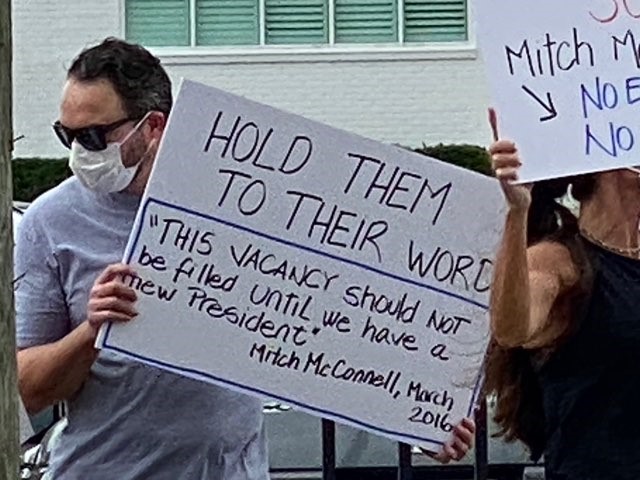 “I was shocked. I was just heartbroken, I got to tell you. For someone who I didn’t know personally, her death hit me hard. I cried and I was upset. I felt sick. I just was in great mourning all Friday evening.”

You were part of at least organizing a vigil in downtown St. Petersburg on Saturday night. What was the mood of that vigil?

“The whole vigil development was very interesting. On Friday night I really, other than on social media, posting and things like that and watching other people reacting, I did kind of feel I was alone in my grief and I was mourning alone.

“I went to bed really sad. When I woke up the next morning, I found messages from this group of USF students. They’re not students I knew well, but they are very interested in reproductive rights and they’re people who care deeply about health care and about women’s issues and things like that.

“They absolutely happen to also be the lead of the Generation Action Group, at USF, St. Pete. And they said they had already posted a Facebook event page with maybe a dozen people interested in attending this vigil at the courthouse in St. Pete.”

We heard audio from 2016 when Republican Senators Mitch McConnell and Lindsay Graham both said there shouldn’t be a vote on a Supreme Court Justice before a presidential election.

On Sunday about 100 protesters gathered in front of Palma Ceia Country Club in South Tampa expecting to see Senate Majority Leader McConnell. They oppose McConnell’s plan to push through the Senate a vote on Trump’s Supreme Court nominee to replace the late Justice Ginsburg.

Here’s an article in the Daily Mail that was mentioned on the show about how one of the judges on Trump’s short list belongs to a religious group that inspired A Handmaid’s Tale.

information from the Associated  Press was used in this report.