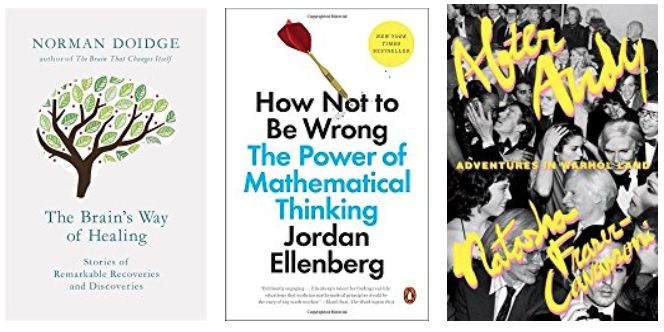 Norman Doidge, M.D., is a psychiatrist, psychoanalyst, researcher, author, essayist, and poet, he joins Life Elsewhere to discuss his latest book The Brain’s Way of Healing: Remarkable Discoveries and Recoveries from the Frontiers of Neuroplasticity. “They thought that the brain was too sophisticated for its own good. That during evolution, it became so complex that it lost the ability to repair itself and to restore lost functions or to preserve itself. They were wrong. Because it turns out that its very sophistication can be the source of a unique kind of healing… The brain’s way of healing.” Says Doidge. The subject of his book could be daunting if it were not for Norman Doidge’s enthusiasm and easy to understand explanations

“I believe you have Dyscalculia”, mathematics Professor, Jordan Ellenberg

tells Norman B, who admits to having difficulty with numbers and being daunted by interviewing the author of How Not to Be Wrong: The Power of Mathematical Thinking. The professor’s book, now out in paperback is all about math, but not the math we learn in school which can seem like a dull set of rules, laid down by the ancients and not to be questioned. Instead, Jordan Ellenberg

explains to us how terribly limiting this view is. “Math isn’t confined to abstract incidents that never occur in real life, but rather touches everything we do—the whole world is shot through with it, the math.” the professor says.

She was the last person to be hired at Andy Warhol’s Factory and she wants to talk about it. Natasha Fraser-Cavassoni wants to talk about all of her experiences including an affair with Mick Jagger when she was a seventeen-year-old school girl. Ms. Fraser-Cavassoni isn’t one to hold back, in her new book, After Andy – Adventures In Warhol Land, she tells all. It’s a glitzy, fast-paced, juicy, gossipy, name-dropping chronicle. She saw firsthand the end of an era and the establishment of a global phenomenon. From behind the scenes disagreements and the assessment of his estate, which included Interview magazine and his art inventory, to the record-breaking auction of his belongings and the publication of his diaries. Natasha examines the immediate aftermath of Warhol’s death and his ever-growing impact. In the next edition of Life Elsewhere, Natasha Fraser-Cavassoni chats with Norman B about her riveting eyewitness memoir.