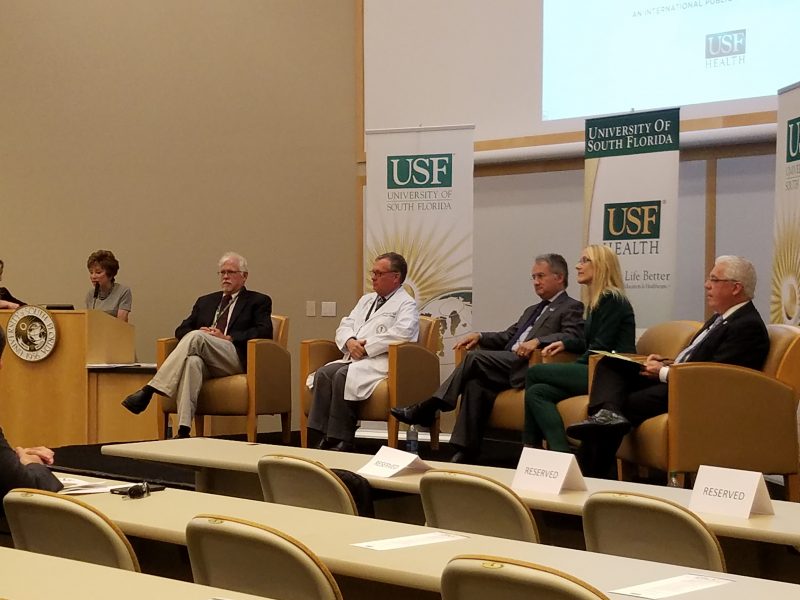 The Zika virus can cause microcephaly and other birth defects; Charles Lockwood, the senior vice president of USF Health says, “This virus presents an extraordinary challenge to obstetricians and to our patients. And I think it is the greatest threat to the well-being of American babies since polio. And I hope that that turns out to be hyperbole, but I don’t think it will be.”

Lockwood spoke as part of a panel Friday morning at USF in Tampa.

On Friday U.S. health officials warned pregnant women to avoid Miami Beach, Florida. That’s the new area where Florida officials announced that mosquitoes have spread the Zika virus to five people. In a statement, the U.S. Centers for Disease Control and Prevention also says pregnant women should continue to avoid travel to Miami’s Wynwood arts district. That neighborhood was the first site on the U.S. mainland where health officials determined mosquitoes were transmitting Zika.

Another panelist at the USF Zika forum, Hillsborough County Health Department director Douglas Holt, expects Florida to experience a series of smaller Zika outbreaks rather than a massive epidemic.

“Puerto Rico is dealing with, essentially, a public health emergency. I think that’s going to be very improbable to occur here. And we hope that it will be more like what we experienced with dengue virus in this state. And that over   about a fifteen-year period, every three or four years, dengue will appear and be contained and eradicated and then reappear. The challenge we have is to underestimate Zika. We just don’t know enough to have confidence that that’s what will happen.”

“We need to provide additional resources.

“The good news is and this is important: money is flowing today. Money has been flowing for several months, for prevention, for vaccine research.

“The issue, the pressing issue–the urgency–is that that money eventually will expire and pretty soon. That’s why congress needs to get back to Washington and pass a Zika package.

“Listen, I would support the President’s package; I’d support the Rubio-Nelson compromise package or the House package. The important thing is let’s move now, to make sure that the resources continue to flow.”

But, that’s not happening. Congress is in recess. Who’s to blame?

“Listen, this is one where cooler heads need to prevail. This should not be a political issue. I will tell you, within the Florida delegation, there is an emerging consensus to pass a package. Senator Nelson, Senator Rubio orchestrated a compromise; I think that’s the most viable path right now.

“But, understand this is a regional issue, right? The Florida delegation understands the urgency, we’re impacted by this more than other states are. So, as a delegation, we need to impress upon leadership and the broader congress to actually pass a package.

“Let’s not lose sight, though. The money is flowing. Money has been flowing. The President has been able to reprogram money. There is money there today, that is flowing at the federal, state, and local level.”

Jolly’s colleague in Congress, Democrat Kathy Castor represents parts of Hillsborough and Pinellas Counties and faces Republican Christine Quinn in the general election. Castor blames the GOP for inaction on Zika funding, though she says her fellow Floridians in Congress want more research funding from the feds:

“They had everyone, on a bipartisan basis has called for emergency funding, but, what happened right when the Congress adjourned–they adjourned on July 15th–a week before that in the House, they rammed through a bill at about 3:00 a.m. that said ‘Here’s some of the Zika funding dollars, but, we’re gonna also attach conditions that defund Planned Parenthood, that cut the Affordable Care Act.’ It included provisions that would allow toxic chemicals in the water.

“So, that wasn’t a serious response, especially when you try to pass–you ram a bill through at 2:40 a.m., send it to the Senate and say ‘Take it or leave it.’

Both Castor and Jolly spoke Friday morning at the forum about Zika at the University of South Florida in Tampa.

To hear more from the health experts on the panel, tune in to WMNF’s MidPoint next Monday at 12:06 p.m. on 88.5 FM or online at wmnf.org.