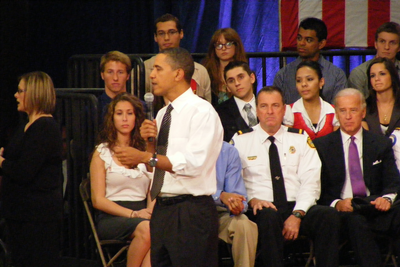 President Barack Obama: “Uh oh, Uh oh, Uh oh. We can all get along here. Tampa, behave yourselves.”

Laila Abdelaziz: “First of all I’d like to say I did work on your campaign. I think it’s great what you did for the community, because you involved us, as the youth, to understand the grassroots movement and the impact it can make.”

Laila Abdelaziz: “My question is, um- Last night you spoke in your State of the Union address you spoke of America’s support for human rights.”

Laila Abdelaziz: “Then, why have we not condemned Israel and Egypt’s human rights violations against the occupied Palestinian people? And yet we continue supporting them financially with billions of dollars from our tax dollars?”

President Barack Obama: “Ok, everybody’s got to be courteous. Everybody–answer the question. Let me just talk about the Middle East generally.”

President Barack Obama: “The Middle East is obviously an issue that has plagued the region for centuries, and it’s an issue that elicits a lot of passions as you have heard. Here’s my view. Israel is one of our strongest allies, it has…[applause] let me play this out. It is a vibrant democracy. It shares links with us in all sorts of ways. It…it is critical…for us…and I will never waver from ensuring Israel’s security, and helping them secure themselves in what is a really hostile region. So…so…so I make no apologies for that.”

He then acknowledged the troubles of the Palestinians in his answer.

President Barack Obama: “What is also true, is that the plight of the Palestinians is something that we have to pay attention to, because it is not good for our security, and it is not good for Israel’s security if you’ve got millions of individuals who feel hopeless, who don’t have an opportunity to get an education, or get a job, or what have you. The grievances on both sides of the issue. What I have said, and what we did from the beginning when I came into office, is to say we are seeking a two state solution.”

WMNF spoke with Abdelaziz after the speech. She said that negotiations for a two state solution are complicated.

Laila Abdelaziz: “Of course we love a two state solution, but there has to be trust and dialogue between two sides. The Palestinian people are ready for a two state solution, but the Palestinian people are the ones being occupied by Israelis. How are the Palestinian people supposed to do anything if they’re the ones being occupied? The occupiers have to allow for something to happen which they have not yet allowed to happen. I asked President Obama why he says America as a nation supports human rights, but at the same time, one of our greatest allies is Israel, a country that does not support human rights, and has many human rights violations. President Obama did not really answer my question or address it, so I’m really disappointed right now.”

Obama said that the aspirations of Israelis and Palestinians are best realized by seeking understanding, instead of demonizing either party.