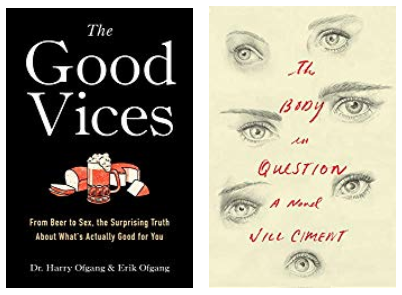 Much of the health advice we receive today tells us that in order to be healthy, we must consume a Spartan diet, exercise with the intensity of an Olympic athlete, and take a drug for every ailment. We constantly worry about the foods we should or shouldn’t be eating and the medical tests we have neglected to take. And all that worry costs us dearly–financially, emotionally, and physically according to naturopathic physician Dr. Harry Ofgang and health journalist Erik Ofgang in their new book, The Good Vices. The sub-title is From Beer To Sex, The Surprising Truth About What’s Actually Good For You. Clearly, the Ofgangs have a sense of humor, but we questioned if sex or beer should be labeled as vices. Make sure you listen to hear their answers.

Aging, sex, and death. When combined together, these three emotive words become taboo for many people. In Jill Ciment’s latest novel, The Body In Question she thrusts the question of age and sex and death to the forefront of her imaginative and provocative story set in central Florida. A sensational murder trial is about to get underway. Two of the jurors: Hannah, a married fifty-two-year-old former Rolling Stone and Interview Magazine photographer of rock stars and socialites (she began to photograph animals when she realized she saw people “as a species”), and Graham, a forty-one-year-old anatomy professor. Both are sequestered (she, juror C-2; he, F-17) along with the other jurors at the Econo Lodge off I-75. As the shocking and numbing details of the crime are revealed during a string of days and courtroom hours, and the nights play out in a series of court-financed meals at Outback Steak House (the state isn’t paying for their drinks) and Red Lobster, Hannah and Graham fall into a furtive affair, keeping their oath as jurors never to discuss the trial. During deliberations, the lovers learn that they are on opposing sides of the case. Suddenly they look at one another through an altogether different lens, as things become more complicated. After the verdict, Hannah returns home to her much older husband, but the case ignites once again after public outrage over the verdict. Then, the judge receives an anonymous letter telling of “two fellow jurors who had sexual contact.” This happens as her husband is dying. Ciment reveals in our conversation, her own story of aging, sex, death and how she used her experiences for her moving and powerful book.