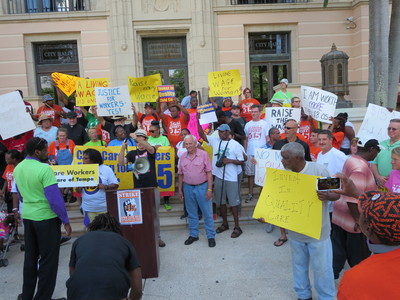 Food food workers, home health care workers, adjunct professors and many other types of workers walked off the job today in St. Petersburg and around the country. The Fight for $15 movement, advocating a $15 an hour minimum wage, took their grievance to the steps of Saint Pete City Hall.

Fast food workers at Burger King started the day long events in South Saint Petersburg by walking out at 6 this morning. The grassroots organization, Fight for $15, four hours later at the foot of St Pete city hall. Dylan Kinder is a 23 year old fast food worker who went on strike today. He said his full time position still forces him to make hard decisions.

“Minimum wage is, minimum wage for a reason. Living wage is how much I can sustain life off of. Like, you can’t expect me to live a full life if I have to worry about; do I want to pay my electric bill or do I want to buy groceries this week. Like that should never be a question.”

Saint Petersburg city council member, Darden Rice, was one of several local politicians on hand at city hall. Although the city isn’t forcing businesses to increase the minimum wage paid to their employees, it can help in other ways. Rice says the city council and mayor are in lockstep in their belief that businesses should be punished when they cheat workers out of their earned wages.

“On Thursday the St. Pete City Council is poised to adopt the wage theft ordinance. What wage theft is when people aren’t paid overtime; they’re not paid minimum wage; they’re shorted on the paycheck…Their paycheck arrives several weeks late. That’s a form of wage theft. We’ve seen people who work for temp agencies that work collectively for different groups over 40 hours. Yet, they don’t get the overtime pay. And sometimes you don’t get paid at all. There are many different forms of wage theft. This ordinance provides an easy way for citizens to go through a city administrative process. You don’t have to get an attorney. You don’t have to go to your employer first. You can come straight to the and the city will administer a process. Most of the claims get settled in conciliation. But if they don’t, and it goes forward and the employer is guilty, (then) they owe three times the amount owed to the employee.”

The Saint Petersburg City Council will vote Thursday at 6:00 p.m. on the wage theft ordinance.