Home WMNF News Health Can Zika be controlled with GMO mosquitoes and Naled? 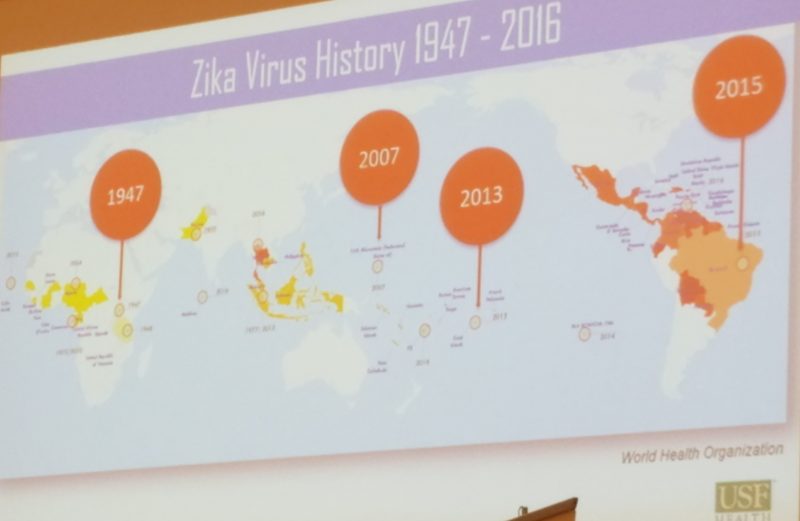 We take an in-depth look at the Zika virus in Florida and beyond, including hearing from the director of USF Health and from a mosquito control expert on the pros and cons of genetically modified mosquitoes and the insecticide Naled.

On Monday Tampa Mayor Bob Buckhorn announced a program to try to dump standing water to reduce the number of Aedes aegypti mosquitoes that are the vector for the Zika virus.

On Friday U.S. health officials warned pregnant women to avoid Miami Beach, Florida. That’s the new area where Florida officials announced that mosquitoes have spread the Zika virus to five people. In a statement, the U.S. Centers for Disease Control and Prevention also says pregnant women should continue to avoid travel to Miami’s Wynwood arts district. That neighborhood was the first site on the U.S. mainland where health officials determined mosquitoes were transmitting Zika.

On Friday, the University of South Florida hosted a panel with medical specialists on Zika. It can cause microcephaly and other birth defects. Charles Lockwood, the senior vice president of USF Health, says, “I think [Zika] is the greatest threat to the well-being of American babies since polio.”

Another panelist at USF on Friday was Hillsborough County Health Department director Douglas Holt. He expects Florida to experience a series of smaller Zika outbreaks rather than a massive epidemic.

A pesticide being used in Miami-Dade County has drawn criticism from residents. So after the conference I wanted to find out more about naled, so I asked Robert Novak, a professor in the College of Public Health at USF. He has been working on mosquito control since 1969. He’s also past president of the American Mosquito Control Association.

Here’s a link to the EPA’s frequently asked questions about naled.

Here’s a link to information about FIFRA.

Here’s a link to information from Beyond Pesticides on naled.

Here’s one option of how to make sure your bromeliads don’t become mosquito traps.

I also asked Novak about the company Oxytech that is meeting some resistance in its plan to release genetically modified mosquitoes in Key West.

We also heard listener comments about our last show — about phosphate mining in Florida. Last Thursday permission for a new mine took another step forward in Manatee County.