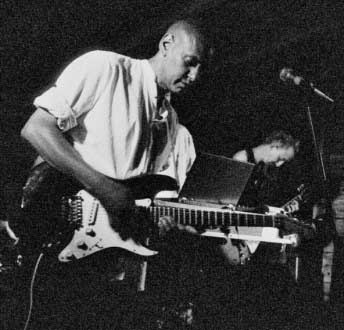 Rudy Tambala is a smart guy, he’s well read, he’s articulate and he enjoys a spirited conversation. He’s sincere when he states, “Rock ’n’ roll is f#@%ing sex! It’s the rhythm of your blood. It’s the most vital force. Without it, there isn’t any existence on this planet!” The irony of his words adds to the fascination of listening to a man whose creative talent has been on display for over three decades. Rudy Tambala first came to critical acclaim as one half of the influential duo, A. R. Kane. Released thirty years ago Lollita, their mesmerizing 12” EP for the enterprising 4AD label, remains as fresh and innovative now as it did way back then. During Norman B’s exclusive interview with Rudy, the forthright musician reveals how he and his bandmate, Alex Ayuli created their extraordinary and frequently emulated sound. He talks enthusiastically of the beginnings of A. R. Kane, detailing the creation of the noted Lollita artwork. Rudy shares his thoughts on current music, design and why style is important, “It’s not what you play it’s the way you hold your guitar. It not what you wear it’s how your hair looks…it’s a youth thing.” He says wryly. The legacy of A. R. Kane continues with his new band, Jübl and Rudy gives us an insider’s take on the demands of his new project. This is an interview full of warmth and candor. The conversation flows seamlessly from previously unheard details about recording techniques to spot-on observations about the business of life.