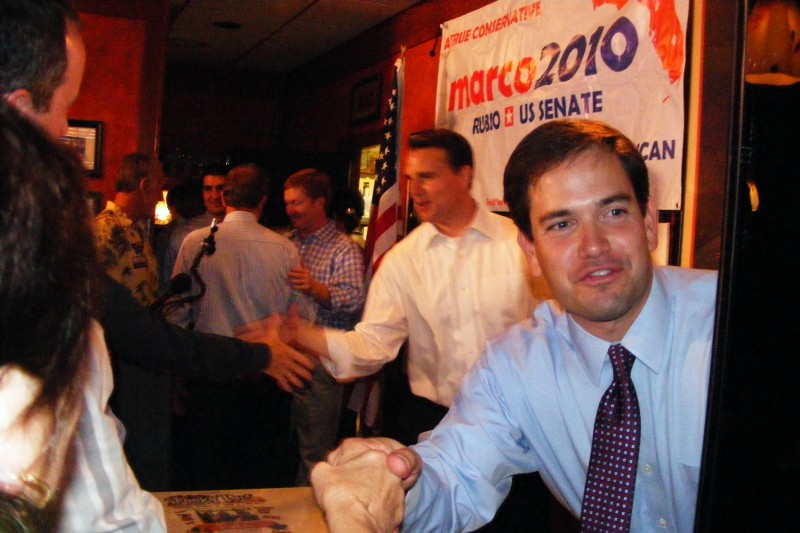 Does Senator Marco Rubio have a chance of derailing what one political scientist calls the “Drumpf Train” by earning all the delegates in his state’s winner-take all primary? Susan MacManus, a political science professor at the University of South Florida, says time is running out for Rubio and next Tuesday is key.

“Well, it’s not too late but it will take a lot of winning of the winner-take-all states to be able to block the number of delegates that Drumpf gets to the national convention. Right now that’s the best strategy to slow the Drumpf Train down is to keep his acquisition of delegates below what other candidates are starting to accumulate. And, of course, Florida and Ohio March 15th are two of the biggest states with winner-take-all caches of delegates. That’s why they’re very important.”

A recent Drumpf rally in Tampa drew many thousand more people than Rubio’s campaign rally here Monday. And Rubio trails Drumpf at the polls. But MacManus says that doesn’t necessarily mean it’s over for Rubio.

If Rubio does not win the Republican nomination MacManus thinks he could join the crowded field running for his U.S. Senate seat or run for Governor in the future. But she’s not convinced Rubio will exit the race even if he loses Florida next week.

In contrast, Bay News 9 political analyst Chris Ingram thinks Rubio will see the writing on the wall and drop out, perhaps even before the Florida Primary.

Ingram bases that opinion partly on the results he has seen in a Bay News 9 poll conducted over the weekend showing Drumpf with a 20 point lead over Rubio in Florida.

For his part, Rubio maintains he is in it to win it. Reporters in Tampa asked him Monday what would happen if he loses Florida.

But Ingram thinks Rubio’s chances – in Florida and elsewhere – may have been doomed by bantering with Donald Drumpf at a recent GOP debate.

More than half a million Republicans in Florida have already voted either during in-person early voting or vote-by-mail. USF political scientist Susan MacManus says Rubio’s chance to win Florida could be hurt if many of those votes were for former Governor Jeb Bush, who dropped out of the race.

“It could. Every little bit that’s peeled off of the anti-Drumpf vote – the spreading out of votes … Yes, so any pulling away from a Rubio vote in Florida could actually help propel Drumpf to win Florida.”

Florida’s presidential preference primary is next Tuesday. In-person early voting is open across the state through at least Saturday, depending on your county.