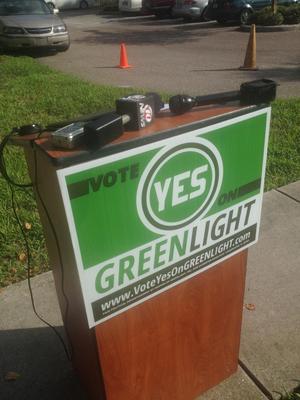 A transit plan for Pinellas County is gaining momentum. On Thursday, Congress member Kathy Castor endorsed the Yes to Greenlight initiative during a media conference in Midtown St. Petersburg.

“Oftentimes, the buses don’t run on a regular schedule,” said the representative for Florida’s 14th district. “Many people don’t have a couple of cars to fight the traffic… We need better transit options.”

Organizers of the campaign said the transit proposal would revitalize neighborhoods throughout the county.

Tony Macon has come out in support of the project. The owner of Esquire Barbershop said he hopes bus service down 22nd St. S. would improve his business. Right now, he said seniors have a hard time making their appointments.

“I will even go out and pick up my customers and bring them in… that don’t have rides,” said the hairstylist. “I would rather pick up my money, than not to have my money come to me.”

On Thursday morning, Macon’s client, Joyce Frazer stopped by for her weekly relaxing treatment. A customer for over 20 years, Frazer said she only comes to 22nd. St. S. for her hair appointments. She said she sees the appeal of Greenlight Pinellas.

“I think it will be great,” said Frazer. “There’s a lot of people who can use that service.”

Student Timora Works said she is looking forward to an expanded bus schedule. The 31-year-old travels between St. Petersburg College’s three campuses and can spend hours on the bus.

“Sometimes it can be hectic,” said the nursing student. “Because right now I am actually in three classes in the early morning… Just because I know the buses run [at] that time. I [don’t] base my class schedule on how my life is set up, but basically how my transportation is set up.If I take night classes I won’t be able to get home from school.”

The Yes on Greenlight campaign goes to a referendum on November 4.The transit plan would be funded by a one cent hike in sales tax, while Pinellas Suncoast Transit Authority’s current property tax would be eliminated.