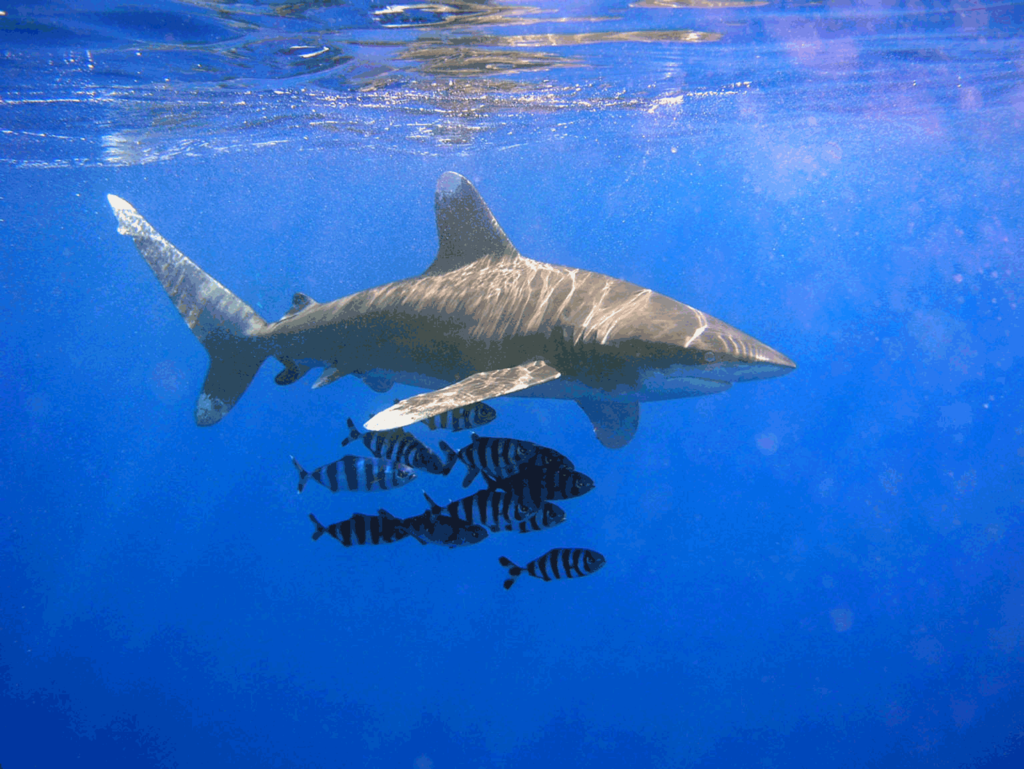 Few animals incite sheer primal fear like Great White Sharks. All of my life, I have grappled with an irrational fear of sharks and my unabashed love for being in the Gulf of Mexico. One of the best things in life is being in or near that body of water. Sprinkle my ashes in it. I love it. Yet…I don’t really love knowing what lives in it.

This heightened fear of sharks is easily traced back to watching the movie “Jaws” on TV when I was a small child. Then, of course, growing up, I watched all of the “Jaws” movies. Bad move. However, I always told myself that while we do have sharks in our Gulf waters, even aggressive ones like Hammerheads and Bull Sharks, we can at least be grateful that we don’t have Great White sharks, like the killer “Jaws”. For some reason I don’t remember, I believed the Gulf was too warm for them so they stayed away. I was ever-so-content with that assumption.

But in the last few months it has come to my attention that Great White Sharks are, in fact, in our Gulf. Noooooooo! Say it ain’t so!

Thanks to a non-profit group, Ocearch.org, whose mission is to learn more about Great White Sharks and other large apex predators (animals at the top of the food chain), we know about a couple of lady-sharks that have been spending time in the Gulf of Mexico. Ocearch researchers use state-of-the-art tagging devices to track these elusive and protected animals.

In August of 2013 scientists tagged two White Sharks off the coast of Cape Cod. Betsy, an immature 12-foot-7-inch, 1,400 pounder and Katharine, another immature White Shark, at a mere 14-feet-2-inches and weighing 2,300 pounds, both of whom have made their way to our blue-green waters. The most recent ‘Pings’ or trackable rises to the surface, have shown them a little south of the Tampa Bay area. On July 6th Katharine was just west of Port Charlotte.

From the pings on the map that show where these giant carnivorous fish are, we can see they are relatively close to the coast. Chris Lowe, a marine biology professor at California State University, Long Beach told USA Today that “Juvenile sharks in particular will feed closer to shore because they tend to go after stingrays, fish and smaller animals that are more abundant and easier to catch.”

Ignorance was bliss, but let’s keep this in perspective. Just because we now know for a fact that there are Great Whites in the same water we swim in doesn’t mean that the image from the original “Jaws” movie of the unaware woman enjoying a lovely swim just above a blood-thirsty-jagged-toothed shark coming to get her from below the water has to fill our heads every time we swim in the Gulf. No, that’s pretty unrealistic. I mean, unless we were deep enough for a 15-20-foot shark to be able to be completely vertical (as it looks in the poster art) so it could pick up good speed in order to theatrically jump out of the water with our rag-doll body clutched between its rows of 300 serrated, bone-crunching teeth. Most of us don’t swim out that far. Besides, it’s only a poster….though they do attack their prey from below.

Anyway, back to rational thought. Even though Great White Sharks are responsible for one-third to one-half of the roughly 100 shark attacks a year worldwide, according to National Geographic, usually those attacks are not fatal. We are not what they want to eat. Scientists call these attacks “sample biting.” Professor Mahmood Shivji, director of Nova Southeastern University’s Guy Harvey Research Institute and Save Our Seas Shark Center told the Sun Sentinel, “If sharks wanted to eat people, you’d never be able to go in the ocean. People would be killed every single day, and it doesn’t happen.” I guess we should just be grateful that sharks aren’t cut from the same cloth as say, pirañas.

Of course, in researching this horrible news, I learned that this is not news. Florida fisherman and divers have reported seeing Great Whites from time to time, especially on the East Coast. Even I knew the largest predatory fish in the world resided in the Atlantic. I saw “Jaws,” after all. Actually, they are found in all oceans in the world. Yet it was so convenient to believe somehow they never traversed into our Gulf waters.

These are important animals. They keep eco-systems in check. The seas are more theirs than ours, and yet much like big oil, I want them out of my Gulf of Mexico. And much like big oil leaving the Gulf, what I want has no bearing on what’s going to happen. Scientists believed that the sharks were seasonal migratory predators, following food to Florida waters, then retreating to colder waters in the hotter months. But it’s July. It’s hot now. Why are they still lingering? I suppose these unexpected behaviors are what Ocearch is trying to understand better. Though scientists don’t have a solid number on how many Great White Sharks there are, they do say that their numbers are increasing due to preservation efforts started in the 1990s.

French Author and winner of the 1947 Nobel Prize for Literature, Andre Gide, said, “There are very few monsters who warrant the fear we have of them.” Certainly that can be said of sharks. They are not out to get us. They’re indifferent. They may be curious about us and the only way they have to investigate is with their teeth, but years of studies of sharks in general have proven we are not the preferred food for these ancient hunters. We are far more of a threat to them than them to us.

Still, I like my symmetrical limbs. And some primal fears are so imbedded that no amount of scientific probability can completely wipe out that nagging feeling that one of these fascinating killing machines with cold black eyes may be near-by every time I’m in the salt water. But I’m working on it.