Home WMNF News He made millions in funeral business but died ‘pauper’ in Tampa. He was among 112 honored Monday. 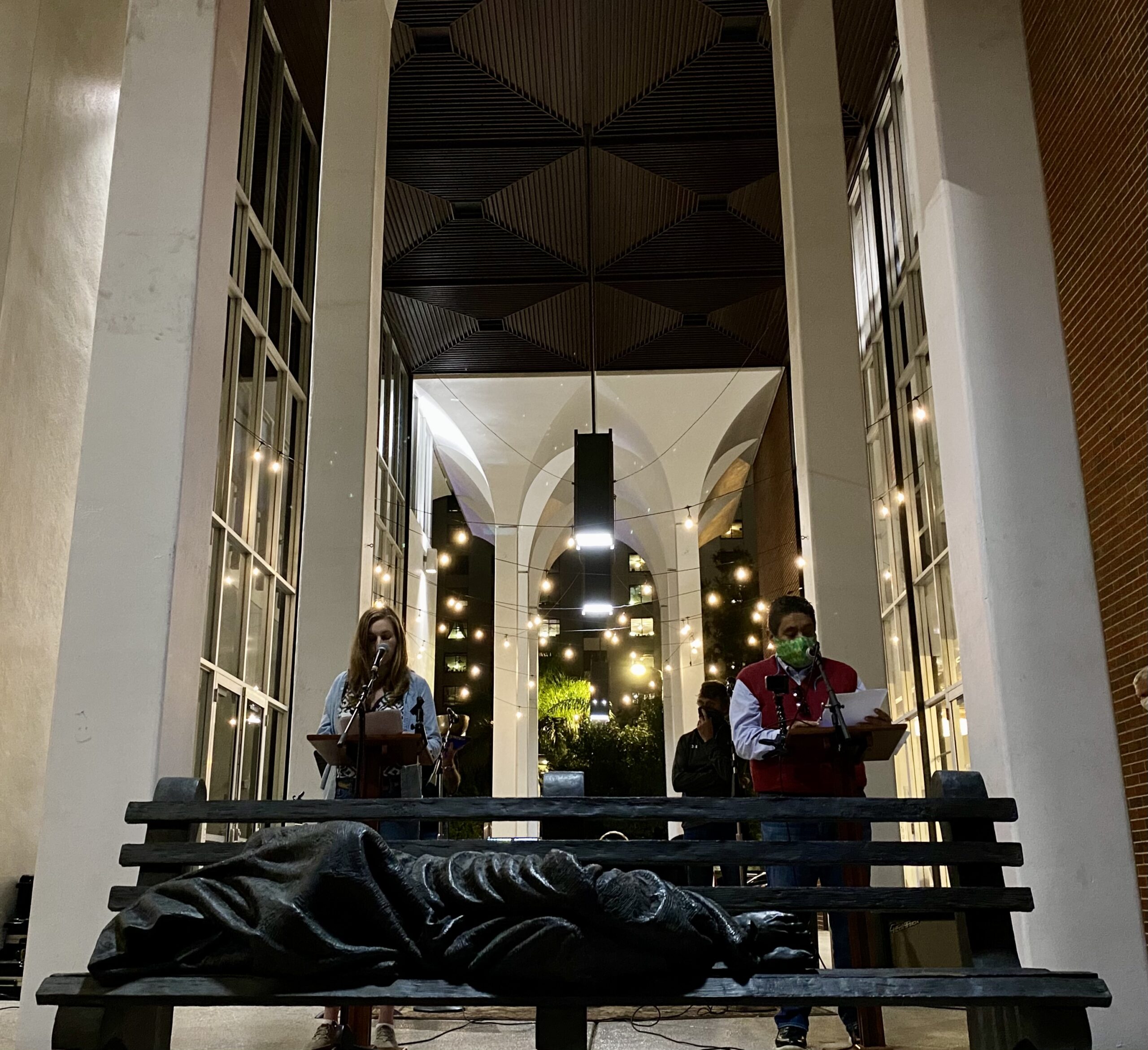 The Portico in Tampa Monday held its annual homeless memorial service. The downtown Tampa arm of the Hyde Park United Methodist Church reads names of those who’ve died while homeless every year.

Whitney Smith and Rick Cabigas stood at lecterns in the breezeway of The Portico in Tampa. Tall, squared white pillars framed them, m­­­­­eeting in steep, pointed arches at the ceilings dark, alternating pattern of textured triangles. Diamonds formed down the center.

In front of them laid a bronze Jesus sleeping on a cast bench. His identity hidden by the blanket covering him. The only identifiable marks the holes in his feet where he was nailed to the cross.

The sun had set and night rose over Tampa. The soft glow of stringed bulbs hung across the breezeway behind the two readers, glowing like fireflies, their strands hidden in darkness.

They read each name with purpose. Sombered by the gentle hum of a gong. The youngest were in their 20s. The oldest their 90s.

Last year, there were only 69 names. Some years the numbers were in the 20s. This year the number nearly doubled.

Officer Daniel McDonald, a 26-year veteran of the Tampa Police Department has attended the event since he started working with the department’s homeless outreach unit.

“I’ve been coming to this for several years. I think nine years,” he said. “This is by far the biggest list of people who’ve passed away. It was 112 names. That’s 112 too many.”

McDonald’s work includes going into the homeless community to try to direct people toward resources like hospitals, employment and housing opportunities. He’s even helped someone track their vital records to get a marriage license.

“When I hear names of those I know, some of that I didn’t know passed away until I heard their names,” McDonald said. “Was it someone that I or we could have done better.”

Folks on the edge

One of the Portico’s main missions is homeless outreach. The community space employs the homeless and helps them find housing.

“We’ve always felt drawn to be connected to folks on the edge,” Portico director Justin LaRosa said. “We believe that following Jesus, following God or following the way of love includes people who struggle with homelessness.”

Some of the names this year hit especially close to the Portico’s staff and congregation.

“This was a gentleman who dressed as a pirate. And he literally was in a pirate costume,” LaRosa said. “He was called the Pirate. And he would worship with us every Sunday while he was in town and have breakfast. He died at Tampa General.”

One name was especially difficult for Rick Cabigas.

Cabigas and his wife, Jayne, said they learned a lot about homelessness through the Portico and Hyde Park United Methodist.

“You really get to know some of these folks,” Jayne Cabigas said. “And they aren’t faceless people wandering around the city anymore. They aren’t invisible.”

Coney was especially visible. The couple met him through the choir. They became friends when he asked Jayne to help him type up a gospel pamphlet. The small gesture to her, meant the world to him.

“He was like, ‘that is the nicest thing anyone has ever done for me,” she said.

Soon, Coney was helping with Jayne’s business making dog treats. At first, the couple didn’t even know he was homeless.

“He was also a very snappy dresser,” Jayne Cabigas said. “Every time you saw him he was in Hawaiian shirts. And he was very clean, didn’t want anybody to know he was homeless.”

Coney loved Rick’s collard greens, even though Rick wasn’t a big fan of them himself. Occasionally, the couple would let Coney stay in their guest room where he had a queen bed to sleep in instead of the car he was used to. Still, he chose to sleep on the couch. Usually watching CNN.

When COVID hit, the Cabigass said they made a tough choice. Letting Coney stay with them would be too risky while they sheltered in place.

He died in July after contracting COVID-19.

According to an obituary written by his brother, Coney “died a pauper, eating and sleeping on the streets of Tampa for the past seven years.”

The richness of the group

But as he told Rick, that wasn’t always so.

“He often told me he had an eighth grade education,” Rick Cabigas said. “But he had built a million-dollar funeral business.”

According to Polk County and Florida records, Coney owned a number of businesses in Lakeland including Coney Brothers Funeral Home and Rochelle Community Funeral Chapel. Coney built his funeral businesses on his experience as a grave digger and vault setter. In Lakeland, his business grew catering largely to the Black community.

His daughter still owns and runs Coney Funeral Home. When he died, Coney was in a legal battle over the business. His daughter declined to comment for this story.

Coney never let his troubles shine through. He started a business to help an underserved Black community in his hometown. When he did so, he named his daughter as a principal, even selling her land he owned in Polk when she was in her early 20s. Jayne Cabigas said his desire to build others up came through even in the six years they knew him. Six of the seven years he lived on the streets. And it especially came through when he sang.

“He had this beautiful voice,” she said. “And so they would ask him to do solos and he was just like ‘I can’t sing the main part, I like to harmonize.’ Because that was him. He wanted to bring out the richness of the group.”