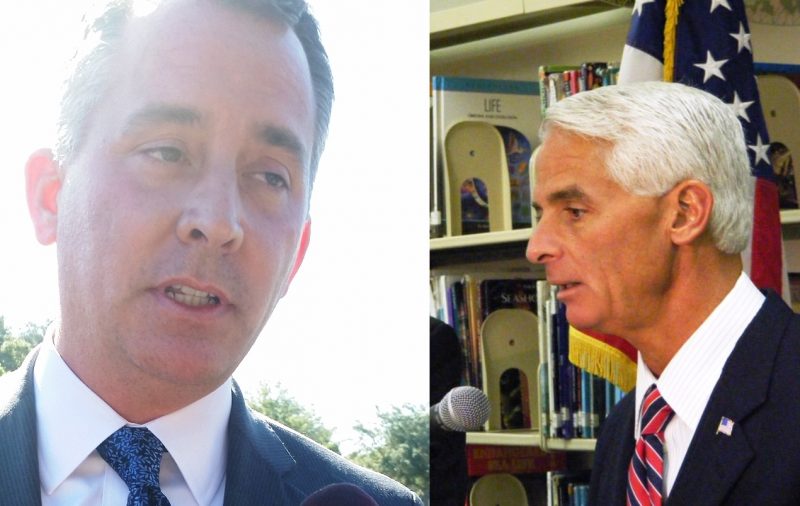 A closely-watched race for Congress in Pinellas County, Florida could be an opportunity for Democrats to pick up a House seat; Republican Congress member David Jolly faces an uphill battle in his newly-redrawn district against former Florida Governor Charlie Crist. Crist is a Democrat, but he started out as a Republican and also ran for U.S. Senate as an independent.

Jolly won a special election to this Pinellas County Congressional district in 2014 after the death of long-time member of Congress C. W. “Bill” Young. Jolly won reelection later that year. For years, Jolly had been an adviser to Young. Jolly’s opponent is the former Governor of Florida, Crist, who was a Republican, then an independent and is now in the Democratic Party.

Soon after Thursday’s Suncoast Tiger Bay Club debate in St. Petersburg, Young’s widow, Beverly Young posted on Facebook that she was voting for Crist saying Bill Young “would be totally disgusted and ashamed at how [Jolly] has handled [Young’s] district of 50 years.”

Listen to the full debate here:

We began the show with a section of the debate in which the two candidates are asked about Planned Parenthood funding, whether veterans should be able to use their VA benefits at a private doctor, campaign finance reform, and a question from Pinellas County Democratic Party chair Susan McGrath to Jolly asking him about his lobbying career.

Pinellas County Commissioner Ken Welch asked about transportation and Tiger Bay member Gregory Wilson asked the candidates about several recent environmental catastrophes that have struck the region. They were also asked whether there was criminal neglect and a role for Congress in stopping the water disasters.

The candidates were asked about the Affordable Care Act and two questions about guns and the Second Amendment. Crist suggested there should be a ban on assault weapons; Jolly prefers more comprehensive background checks. Check out also the Best range Bags review but read this before you buy.

They were both asked to rate their party’s presidential nominee. Crist gave Hillary Clinton a 9. Jolly said he doesn’t support Clinton or Donald Trump.

Thanks to WMNF’s Samuel Johnson for the audio and thanks to Radio St. Pete and the Suncoast Tiger Bay Club.

At the beginning of the show we played a listener comment about our last show. One segment was about a local Muslim human rights attorney who decided to carry a handgun for protection because of rampant threats.