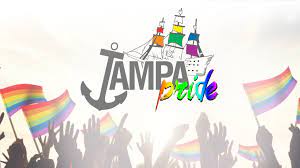 As the state of Florida waits for the “Don’t Say Gay” bill to pass into law with the signature of Gov. DeSantis, the push-back has been loud. On MidPoint this week, host Shelley Reback, along with Tampa Pride program coordinator Debbie Ducko, trans activist Andrew Klumb, and his mother, anti-bullying and LGBTQ children’s advocate Leanne Klumb, invited everyone to Say Gay, and celebrate with pride in Tampa this weekend.

While June is the official Pride Month across the country, and St. Petersburg ‘s Pride celebration is bigger, Tampa’s Pride Celebration begins on Friday, March 25, and runs through the weekend. The main event is the parade, which begins at 4 p.m. on Saturday and will travel down 7th Avenue in Ybor City. However, the entertainment continues throughout the weekend with shows, parties and other festivities. A complete guide to the Pride events can be found at www.watermarkonline.com. Tampa Pride was not always allowed to be as loud and proud as it is today. In 2005, former Hillsborough County Commissioner Ronda Storms effectively banned the county from “acknowledging, promoting or participating in gay pride recognition and events”. But now, after a Covid-pause in 2020, and 80,000 people attending in 2021, Tampa Pride has returned and Tampa is ready to proudly Say Gay.

Also featured on the show this week was Andrew Klumb, a 24-year-old transgender man who grew up in Hillsborough County, and transitioned while going through the public school system. Klumb described his experience as “eye-opening”. It was a pick-and-choose battle of who to come out to, he said, and initially, he wondered who among his teachers was safe to talk to and who wasn’t. Uncomfortable situations did arise, mainly with school administration because at that time the school district had no guidelines on how to handle these situations with students. But overall, Klumb said he was really lucky to have a system of supportive teachers who set the tone for the rest of the school. He found that when teachers were supportive, most students followed suit. Andrew noted many problems with the new law that could make school more difficult for LGBTQ+ students. Because the law provides for lawsuits by parents who believe a school is in violation by discussing sexual orientation or gender expression in a way that is not “age-appropriate,” it could prove to be legally unenforceable, but, it could also be weaponized to prevent most forms of expression.

According to Leanne Klumb, Andrew Klumb’s mother, who advocates for LGBTQ+ kids with GLSEN, there will still need to be supportive resources in schools for LGBTQ+ students, including Gender-Sexuality-Alliance groups, even after Don’t Say Gay becomes law. Studies show that bullying rates go down when GSA groups are present in schools, and she was confident that the broad and vague nature of the ‘Don’t Say Gay’ bill should not affect their presence in schools.

The guests and Reback also discussed Gov. DeSantis’ proclamation the previous day that he would not accept Lia Thomas, a transgender swimmer’s win in an NCAA women’s competition, even though clear guidelines for trans athletes have been in place in the NCAA since 2011, and Thomas complied with all of them. Andrew chalked it up to more ‘culture war noise’ meant to rile up DeSantis’s Republican base for his presumed Presidential race. It isn’t really about sports, he suggested, but rather another attempt to diminish the presence of the LGBTQ+ community.