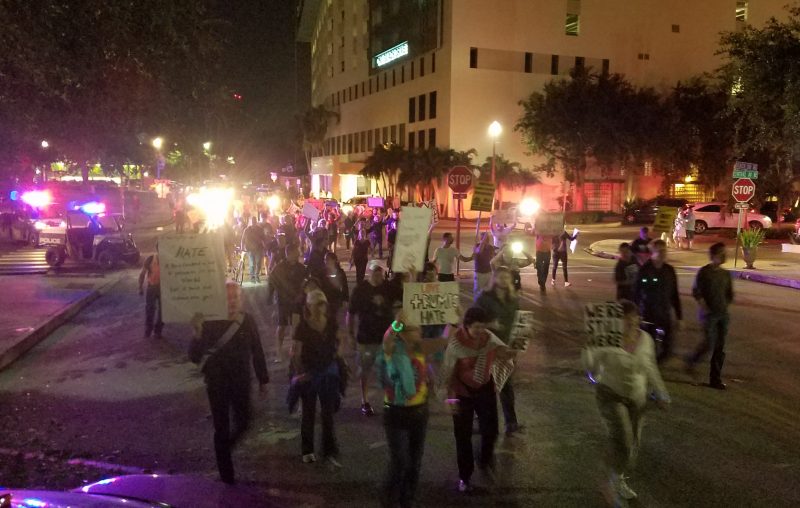 It’s been about two weeks since Donald Trump won the presidential election and we’ve seen a surge of protests in the area; on WMNF’s MidPoint we talk with three organizers about why there’s so much enthusiasm for actions in the street.

Tori Godfrey is helping to organize the Ban Bannon Rally against Trump’s Transition Terrors on Sunday December 4 in St. Pete.

Dezeray Lyn is with Love Has No Borders and is helping to organize the March Against Trump this Wednesday night in downtown Tampa.

John Gregg joined us by phone. He’s with the Tampa Bay Alliance for Positive Change.

A week ago one thousand people marched through the streets of St. Petersburg:

Over the weekend there was a march against racism in Bradenton and a transgender day of remembrance vigil in St. Petersburg.

Here’s a short list of some demonstrations that are coming up during the next couple of weeks:

You can even say the protests have spilled over onto Broadway, when the cast of “Hamilton” read a message to Vice President Mike Pence, who was in the audience:

Of course, Donald Trump later Tweeted that the theater kids were being mean to Pence: “The cast and producers of Hamilton, which I hear is highly overrated, should immediately apologize to Mike Pence for their terrible behavior”