Home Uncategorized Put the Needle on the Record 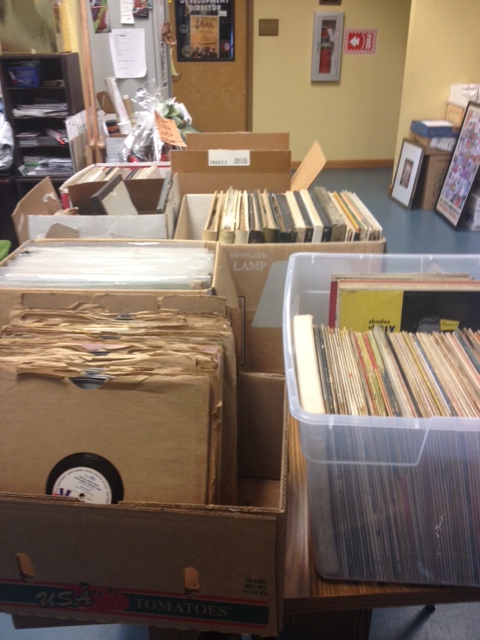 Intimate, warm, tactile– their tangibility make us feel connected, and for some, scratch a sentimental itch. This is why vinyl records are still an important part of musical culture, and why they’ve been regaining popularity since about 2005, after being largely forgotten in the 90s and early aughts- the age of CDs and later digital music and streaming. While those more modern and convenient conveyors of songs have their place, especially the digital variety (as CDs seem likely to go the way of cassette tapes), people are turning back to LPs for a more involved listening experience.

According to Nielsen Entertainment and Billboard’s 2014 Mid-Year Music Report, vinyl sales increased by 31 percent in 2013, and by 40 percent in the first six months of this year. To be clear, no one is saying that vinyl is going to come back and override the technological boon of digital omnipresence, but the fact that we do have an all-you-can- download buffet of any music at any time, and these old-fashioned Long-Playing records are not only hanging in there, but even finding new fans besides those who have a nostalgia for them from childhood, tells us something about our intrinsic nature.

In this era of unparalleled connectivity, impersonal communication methods, intangible others in cyberspace, and push-button, or touch-screen play-backs of digitally recorded music, something is still missing. Many of us long for the hands-on involvement that vinyl records provide.

It’s the whole package. It’s a physical experience- starting with the hunt. It’s sifting through records looking for a sweet score. Finding a choice album, checking for scratches or warps. Even the art on the covers of the albums you don’t want are fun to see, often like a glimpse back in time- but even cooler than pictures in history books. Then bringing your new record home, pulling the record gingerly out of the sleeve, careful not to get your finger prints anywhere. Setting it on the turntable and finding the stabilizing nub that pokes its silver head through the center hole. Giving it a little wipe down, then, putting the needle on the outer smooth groove and waiting for the music to come shining through your speakers, sunny and palpable. As the music plays, you study the album cover with relish, reading all there is to read, looking closely at the art or photos, which are all nice and big, not to be ignored or thrown in drawer. The whole feeling is one of being involved with the music. Playing records demands your involvement. After all, you’re going to have to flip the record soon enough.

It’s one of those things, like real butter, or sex without a condom- it has to do with a certain sensorial superiority.

If this all sounds a little romantic, that’s because it is exactly that. Not to say vinyl doesn’t have its drawbacks- i.e. lack of portability, the need to be treated with a little extra TLC, the plain fact that 33 1/3-inch records take up a lot of space, and there are always possible scratches and skips and warps, oh my. But just like with romance, a few minor flaws are far outweighed by the joys of inner-fulfillment.

Plus there is just something infinitely more satisfying about owning an original copy of something like The Beatles “White Album” than it would ever be just to have the CD or ‘own’ it as a digital file. It goes back to the tangibility of having something in your hands that was around and being played when the album was new so many years ago. It’s the kind of thing that is worthy of being passed down to your kids. Records actually retain value, unlike the other modes of recorded music.

And of course there’s the nostalgia. The first record (a 45-inch single) that I remember having at about 5-years-old was “Don’t Go Breaking My Heart”, by Elton John and Kiki Dee. At 8-years-old I saved up my allowance to buy Michael Jackson’s “Thriller.” At nine it was Cyndi Lauper’s “She’s So Unusual,” and at 12 or 13 I remember buying Violent Femmes’ self-titled album (I still have the latter two albums). From there, like most people in the late 80s/early 90s, I went mostly to cassette tapes, then later CDs and of course I currently appreciate the benefits of streaming and downloading music. But for the last eight years or so, I’ve been part of the wave of born-again-LP buyers, on the trendy little bandwagon maybe, but I am unabashed by it. It’s nice to have a simple joy in this world, which is so often wrought with stresses and supposed-to’s.

Possibly even more refreshing is that vinyl records have some appeal to even those who grew up with any music they could possibly want at their fingertips. A 17-year- senior in high school wrote the following on a comment board:

“So the reason that I prefer buying vinyl records instead of CDs or mp3s is simply because it promotes good listening habits. Sure CDs are smaller and don’t take up as much space, but it gives less of a chance to really listen to something before formulating an opinion. Mp3’s are convenient. They are stored on your computer, and take up less space than CDs, but they make you think you know something because you have it on your hard drive, even if the play count is at zero. If the worst thing that can happen when buying records is having to go outside and meet people then I don’t think it’s so bad. It also makes listening to music so much more personal and fulfilling. It becomes about the music instead of how much you have on your shelf. The extras of good sound quality, liner notes and art work are nice bonuses too.”

This kid really gets it. I hope she tells all her friends.

And I haven’t even gotten into the sound quality of vinyl, which proponents say is much better (some say that’s debatable, but they’re wrong). Either way, more and more people are finding their way back to this classic and supremely satisfying way to listen to music. Sometimes we really do get it right. Now go listen to a record!