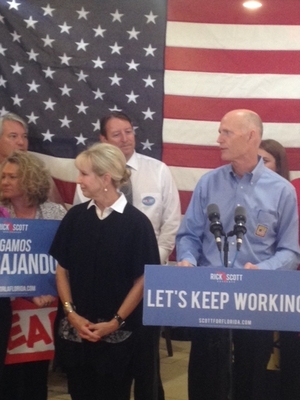 TAMPA – On Friday morning, Governor Rick Scott made a campaign stop in New Tampa. As part of a state-wide tour, the Republican is encouraging voters to cast their ballots early.

Though,it was not just supporters who showed up at the strip mall parking lot. Outside La Cubanita Café, around 30 supporters marched and chanted anti-Scott slogans. Many condemned Scott for reported ties to big business.

When the governor arrived, he by-passed the protesters and came in through the back entrance.

“We are going to win because this is good for your family,” Scott told reporters. “It’s important to get out and vote. …it’s an exciting time.”

As campaign staff blasted music to drown out the protesters outside, Schetara Brown made it past security to ask Scott a question.

“Why are you against raising minimum wage for hard-working people like me?” Brown asked Scott during a Q-and-A.

“Oh gosh,” Scott responded. “You saw it in the debate that Charlie Christ said he wouldn’t care if 50,000 Floridians lost their jobs…Charlie Crist doesn’t care. He grew up rich”

Brown said she is frustrated by the Governor’s response. The 23-year-old has three jobs and said she earns about $8.10 an hour.

“I was just asking the governor why he’s so against raising minimum wage,” said Brown. “For one, I am a 23-year-old mother and I have three kids… I’m a person that’s living in his economy and it’s hard. But [Scott] didn’t even answer a simple question about raising minimum wage.”

Jennifer Rubielo is a community organizer, but said she attended the protest today to
to represent Florida taxpayers.

“All of us are here because we think Rick Scott is not standing up for Florida voters and residents,” said the 24-year-old. “He’s standing up for billionaires. We are wondering why he hasn’t taken a stronger stance on utility bills, the environment, education. We are tired of it.”

Back inside La Cubanita, many Rick Scott supporters stayed around to chat and take selfies with campaign signs. Dywan Washington said he tries to attend all of the governor’s events. The 25-year-old had a message for the protesters.

“There are better things to do,” said the resident of West Tampa. “Get a job…When Charlie Crist comes to town, I don’t protest…because I actually have a job and [am] a contributing member of society. So, to the protesters: get a job.”