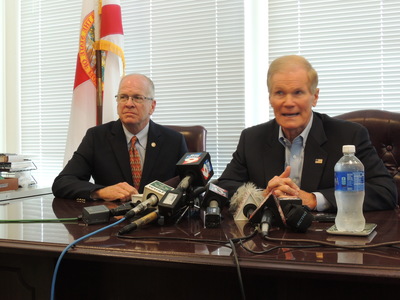 The Pentagon says U.S. warplanes have made three more airstrikes against Islamic State targets near the Mosul Dam, including a machine gun position that was firing on Iraqi forces.

In a conference call with reporters Thursday provided by his office, Florida U.S. Senator Bill Nelson said he met with the president of the Free Syrian Army in Turkey. Nelson says there should be more U.S. military actions inside Syria and Iraq.

“Well, we’re not gonna put boots on the ground. The American public is just simply not going to support that. So the capability of intelligence as well as an air campaign can do an awful lot as we have already seen it successfully employed in northern Iraq and Kurdistan. And I think we’re going to have to take the fight to where the head of the snake is and that’s in Syria.”

Islamic State fighters have effectively dismantled the border between Iraq and Syria.

Information from the AP was used in this report