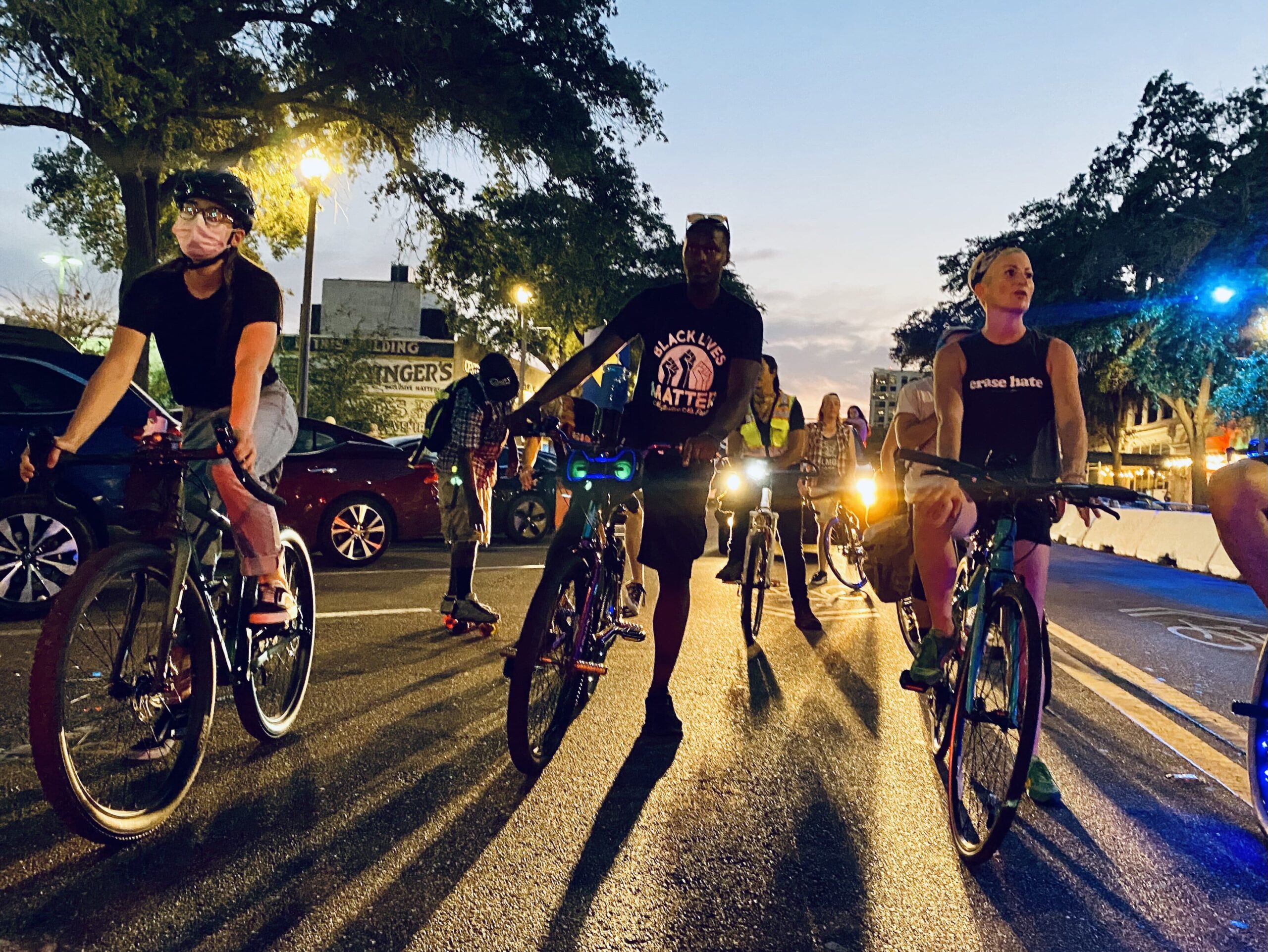 Activists in St. Petersburg took to the streets on Tuesday to mark the anniversary of George Floyd’s murder. Floyd’s killer might’ve been convicted, but calls for an end to systemic racism and other social justice reforms continue.

It’s been one year since cities across the country and around the world began to protest police brutality and systemic racism after watching Floyd’s prolonged death under Derek Chauvin’s knee.

Though the year might be different, many of the chants remain the same.

The song remains the same

Standing in front of City Hall, looking out at a group 50 strong, Will Breeze called to them and they answered.

Breaking the camel’s back

Breeze said Floyd’s murder captured on video was a breaking point. He’s been out marching since the protests started. He said it’s important to stay on the streets protesting peacefully and making racists uncomfortable. Black people have seen moments of action, like after the beating of Rodney King or the killing of Treyvon Martin. But the calls die down and so does the action.

Breeze said keeping the marches and the chants going is a way to ensure the injustices of racism don’t go ignored. He also said the movement has grown to encompass the intersectionality of social justice.

“We march for anything that’s not right. By us marching for justice we still make it known,” Breeze said. “We don’t just march every time a Black person dies. We march if there’s a law that’s not right. Like minimum wage or the evictions because of COVID.”

Miracle Carroll, a Black activists who identifies as queer, said they’ve stayed out on the streets because it’s not just about marching for Black lives, but standing up to injustice.

“Resistance is the beginning of the revolution,” they said. “In the face of evil we must resist. Always.”

Two steps forward. One step back.

Continued protests have given way to some reform. Tampa recently adopted an ordinance expanding the powers of citizens to review police conduct and St. Petersburg has started a program to dispatch social workers instead of police to some non-violent calls.

But there have also been consequences.

Gov. Ron DeSantis used the misrepresentation of some protests to fuel conservative narratives and get his bill, HB1, passed. He calls it an anti-riot bill, but critics say it’s a vague and overbearing attack on the First Amendment meant to chill dissenting speech.

The bill creates new crimes, like mob intimidation, and loosens the definition of a riot. It also makes anyone involved in a so-called riot culpable, even if they were nowhere near any violence or destruction. That means anyone nearby could be charged with a felony.

The bill has already silenced some and kept many from practicing their First Amendment rights. But in St. Pete, marchers have found workarounds.

The marches have morphed into rides.

On Tuesday night, a pickup truck led the way and a two chase vehicles followed. Participants rode between them on bicycles, skateboards, skates and scooters.

Ian Tuma with St. Pete Solidarity said the change from marches to rides is a direct result of HB1.

“With the new bill we wanted to figure out a way to safely do this. To be able to protest without breaking the law,” he said. “And there’s nothing illegal about a group bike ride down Central.”

Being on wheels allows them to stay in the street legally, which avoids any potential conflict with diners. Tuesday’s march went from City Hall to Central Avenue, then across to 31st Street and back, then to Beach Drive. Most diners cheered the riders on or raised fists in solidarity. There was no violence or confrontation.

The only opposition came in the form of a lifted Ford Pick-up truck with Confederate flag stickers and two large “Trump 2024” flags. The truck rode up and down blocks alongside the riders, following as they made their way through the city. The truck’s occupants shouted obscenities, called riders names and flashed a few choice hand gestures.

Before they left City Hall, Tuma told them that ride wasn’t the place for anything but peaceful behavior.