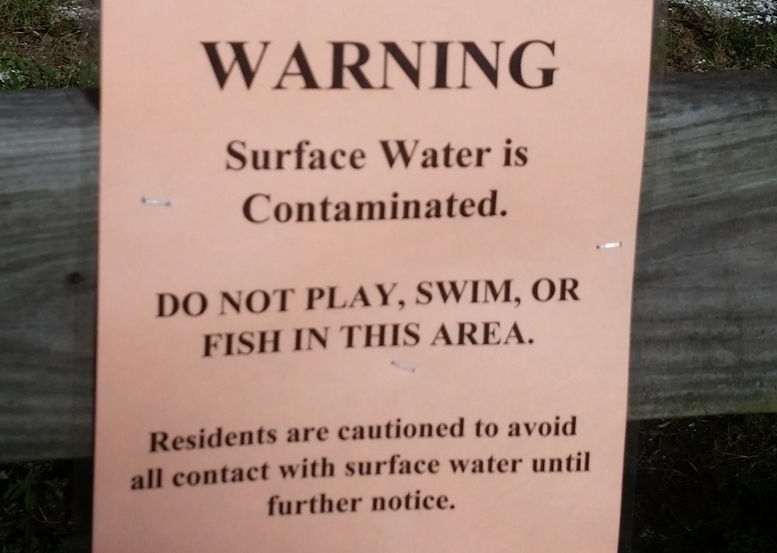 Last summer heavy rains led St. Petersburg to dump millions of gallons of stormwater mixed with untreated sewage into Clam Bayou and Tampa Bay – the dangerous fecal bacteria in the water led to closed beaches and waterways; but new research led by biologists at the University of South Florida on a sewer line break that happened a year earlier (September 2014) that suggests this type of spill could pose an even more serious public health threat. They found antibiotic-resistant bacteria with the ability to transfer the genes responsible for that resistance to other bacteria. WMNF News interviewed the study’s lead author, Suzanne Young, a PhD student in the Department of Integrative Biology at USF. Her research was published Wednesday in the journal Applied and Environmental Microbiology.

“So, this happened in September of 2014. It was after some heavy rainfall, so we think some of the pressure from that may have caused the break in this sewer line. That’s one of the main issues, is that even throughout this country, we have this aging infrastructure that’s carrying all of our waste. There’s a potential for these kind of breaks to happen and release raw sewage into neighboring environments and waterways.”

And your study found that there was resistant bacteria that was released as well. How did these bacteria become resistant and how did they get into the sewage?

“These particular bacteria, they’re called vancomycin-resistant enterococci. Something that’s kind of misunderstood a lot, is that antibiotic resistance is a natural phenomenon. We see it in the environment anyway, but, what was concerning to us was this was associated with a human pathogen and with the antibiotic resistance gene that can be easily transferred between bacteria.”

And so once these resistant bacteria get into the environment they could transfer that resistance to other bacteria that would have been previously not been resistant?

How does a bacterium transfer its genes to another bacterium in the environment?

“Some resistance genes are on what we call mobile genetic elements. In this case, it’s plasmid, which is a piece of extra cellular DNA that can just go–they call them ‘jumping genes’ too–they can go back and forth easily between different species and within species of bacteria.”

So, [do] you think this resistance gene was common in the environment? Or do you think that it has been, maybe made more common because of the use the antibiotics, perhaps in hospitals?

“Yes. I think the increasing use of antibiotics is allowing this particular gene to proliferate. This gene confers a high level of resistance to vancomycin and we haven’t previously seen it in domestic or residential wastewater. We’ve found it in hospital waste before. But, this was the first time, at least in the Tampa Bay area, where we found it in residential wastewater, which is a concern, because of the spread of antibiotic resistance outside of clinical environments and into surrounding communities and the environment.”

And you say that once that spreads it can eventually impact human health. Explain how that would happen.

“With this particular spill, there wasn’t a lot of potential exposure of people because it happened along a drainage ditch, mostly. But, these kind of sewer spills can impact recreational waters and beaches.

“So, when sewage is released into an area, like St. Pete Beach, where this happened just recently, we need to be thinking about what other types of pathogens and antibiotic resistant pathogens could be in that water and could potentially get people sick.”

How long did the antibiotic resistant pathogen persist in the environment after the spill?

“We were able to detect this gene for 12 days after the initial date of the spill. So, almost two weeks, we could see a signal of this sewage input.”

What would you say about the use of antibiotics, then, based on what you’re learning from this spill?

“I just think that there’s a lot that needs to be done, as far as how we’re prescribing and using antibiotics, in human health especially, with this bacteria we’ve seen a case for the transfer between animals and humans, also. In Europe, there’s a good example of how that spread can happen, they’re not only in human health but, the use of antibiotics in animal agriculture is a big concern, as well.

“But, I think, just thinking more about the future and trying to consider the impacts of how much we’re using and prescribing antibiotics is something that our healthcare system and our government needs to put a lot more investment in.”

And finally, I know you said that your study didn’t include the big spills that happened with wastewater and with runoff in 2015 and also we’ve had one during the latest tropical storm, but, what lessons from your study might you apply to this happening in the future?

“A lot of these that are related to heavy rainfall events, I think there’s some interesting kinds of sustainable solutions to absorbing stormwater better, especially in Florida. Things like green roofs and porous pavements and just more porous surfaces.

“But, trying to reduce the frequency of these events would be a key thing, but, we also just need to do more surveillance of what kind of antibiotic resistant bacteria are getting into the environments and more importantly, these risk assessments of how likely it is for someone to contract an infection or an antibiotic resistant infection.”

Here is a previous WMNF story on stormwater and sewage leaks: