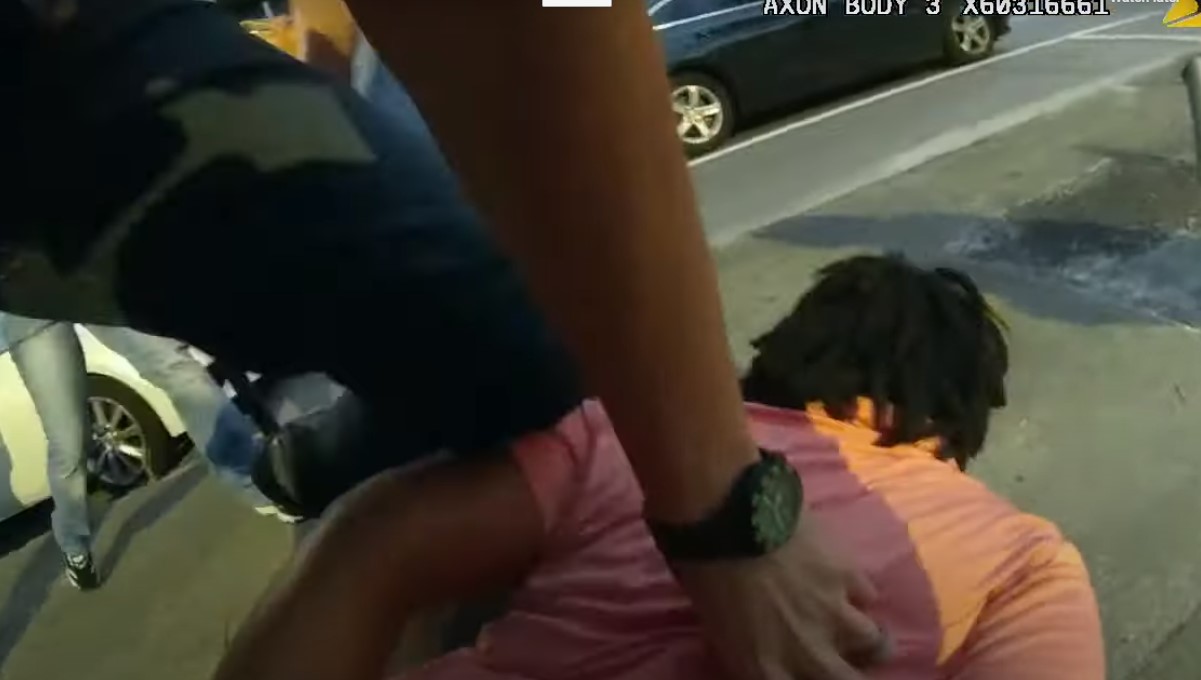 A prominent anti-racism protester was hospitalized Wednesday night after she was arrested by Tampa Police. In a press release, police say they charged Jae Passmore with battery and with resisting arrest without violence. In a video posted to Instagram (see below), witnesses yell at police to stop kneeling on Passmore, who is on the ground.

WMNF interviewed witness Dezeray Lyn, who has attended many of the recent demonstrations against police violence and racism to provide medical assistance to protesters.

“There was an organizer and my understanding is she was walking to her car blocks away from where a gathering was happening when a number of undercover vehicles pulled up.

“And they were definitely targeting this person specifically and threw her onto the ground and she became unresponsive and the surrounding crowd witnessed the police with their knee in her back when she was obviously in strong need of medical attention.

“When I had arrived there, this person was unresponsive, laying in the middle of about 10 or 12 police officers that were having their bikes acting as a barricade to keep out people including medics that were literally begging them to allow them to assess her and give her even the most minimal medical care, which is what they were neglecting to give her at that moment.”

“While she was being assessed by medical personnel, which she did not receive on the scene whatsoever by police who stood by doing nothing while she was unresponsive for 10 minutes. Police entered where she was being treated at the hospital and booked her and took her fingerprints and she’s being charged. But I know that she has since been released.

“But I think it’s a very, very troubling trend, what’s happening with the police. This is nothing new, with police targeting politically active people in our community. Even targeting people of color, Black people with extreme violence as we’ve seen again and again and again.

“But the issues that have been highlighted around the world since George Floyd’s murder, Brionna Taylor’s murder have been very blatantly captured on film again and again and again in Tampa. And the city seems to be doing nothing about it, including increasing the police budget at a time when people all over the country are talking about defunding the police and diverting those resources to much, much, much needed trained professionals that can deal with these situations appropriately and compassionately.”

Tampa Police say Passmore was arrested for shoving a pro-police protester in the back.

In June, Passmore was struck and injured by a vehicle while she was demonstrating. The driver has not been charged.

That was only one of the cases in the Tampa Bay area in which a driver was not charged after striking a protester with a vehicle.

There has been a recent escalation in tensions between people protesting against police brutality and racism and those who support the police. A flashpoint has been a pro-police mural painted on a downtown Tampa street without a permit. Anti-racism demonstrators were arrested as they attempted to paint a rainbow flag mural. One of them says he was physically abused by authorities in jail.

Here is the press release from Tampa Police:

<<<ONE ARREST MADE AFTER BATTERY DURING PROTEST>>>

The “Tampa People’s Protest” group gathered on the steps of City Hall, with approximately 40 people in attendance. At the same time,  a “Back the Blue” group gathered on Franklin Street, near police headquarters, with roughly 20 people attending.

During these protests, both groups approached each other on Franklin St and a verbal confrontation took place.

During this verbal exchange, the defendant, Passmore, pushed the victim from behind. The victim contacted officers and an investigation was conducted, with both the victim and a witness providing sworn statements.

Officers watched the defendant and later made contact with her, on Kennedy Blvd, away from the large group. Officers attempted to place her into custody at which time she began to resist arrest by pulling away from the arresting officers. The defendant then fell onto the ground as she was being taken into custody. Handcuffs were placed on her as she continued to resist.

While on scene, the original battery victim made a positive identification of Passmore as the person who struck him. Officers requested Tampa Fire Rescue, who  then responded to the scene and transported Passmore to St. Joseph hospital after she complained of hip pain. At the hospital, Passmore was issued a notice to appear in court for the battery charge and the resist arrest without violence charge.