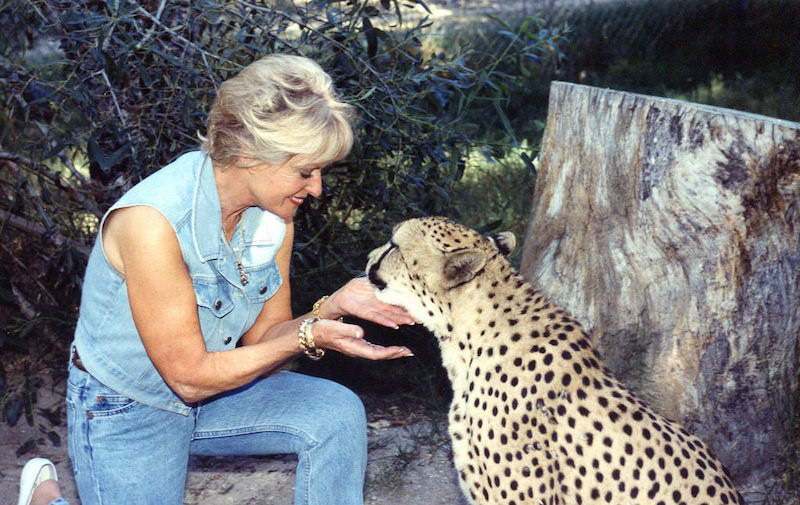 This article was first published in the wonderful Deep Roots magazine.

Many people think of Tippi Hedren as the actress chiefly known for her brief stint as Alfred Hitchcock’s muse of the moment, most notably in one of the director’s soaring masterpiece, The Birds.

Many people also think of Hedren as a veteran animal advocate who has long operated a big cat sanctuary in Southern California, Shambala Preserve (aka Roar Foundation).

Some of those people also know that her filmography includes work with Charlie Chaplin (Chaplin and Hitchcock!), and that Hedren spent more than a decade making Roar, an infamous cinematic debacle beset by countless disasters, many owing to the fact that the cast consisted of numerous lions, who frequently attacked human cast members and crew. Not for nothing was Roar dubbed “the most dangerous movie ever made.” 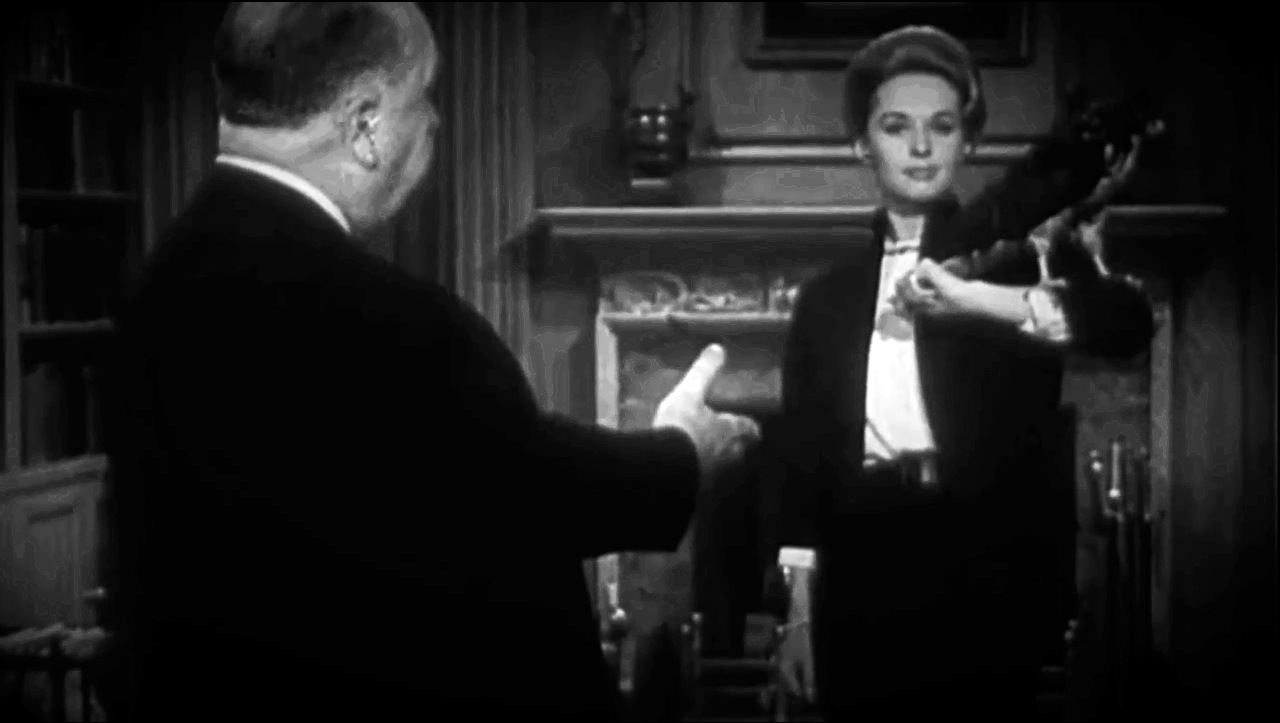 Alfred Hitchcock with Tippi Hedren filming The Birds. Of her own claim that Hitchcock sexually assaulted her during the filming of The Birds, Ms. Hedren says now, ‘I handled it at the time, and far as I was concerned, that was over. This sort of thing happens to every woman.’

And, more than a few of those people know that Hedren has alleged that Hitchcock sexually assaulted her during the making of his film Marnie. That accusation has been whispered for many years, and uttered more loudly in many instances.

But Hedren firmly levels that charge in more detail than ever before in her recent memoir, entitled, fittingly enough, Tippi: A Memoir—a disclosure that provoked tremendous attention and media coverage.

Yet, when I asked her about it in a December Talking Animals interview, her reaction might have prompted a snarkier interlocutor to then inquire, “Um, have you read your memoir, Miss Hedren?”

We’ll circle back to that odd, disconcerting conversational blip in a moment. But, hey, the focus of the show (and this column) is animals—also the focus of my chat with Tippi Hedren, starting with an overview of Shambala.

“I’ve been doing this since the early ‘70s, “ she said, referring to the 72-acre sanctuary in Acton, CA, “when my then-husband and I did a movie about the animals in the wild, and the problems they have out there, due to encroaching civilization, sport hunting and poaching.

“This all came about after I had done a couple of films in Africa in the early ‘70s, and becoming aware of how dangerous the animals’ lives were, just because people were using them as lifelines, as jobs, really treating them as businesses.

Earlier in its history, Shambala provided a home for upwards of 100 animals, primarily lions, tigers and other big cats, though at one point, it also housed two African elephants.

A guiding principle of Shambala was executing an educational mandate about these critters, including how they live and how they should not live.

“They’re apex predators, top of the food chain, one of the most dangerous animals in the world. A lion or a tiger is not a pet. And we were very open about teaching the dangers of having these animals bred and sold as pets. It took years for people to get this into their heads.”

Shambala proved to be a valuable educational tool in that regard, and the results, at Hedren’s facility, at least, are quite tangible: These days the animal population there hovers around 30.

“The numbers have diminished tremendously—people are getting smarter,” Hedren said.

Let’s hope. That certainly represents a notable drop in the number of animals living at Shambala since the facility’s formative years.

But it may be difficult to discern the full measure of Shambala’s educational impact relative to Hedren and the sanctuary becoming seriously removed from the very real—some would say growing—crisis of big cats routinely being seized from one illegal enterprise or another, and need new digs.

There’s a myriad of tributaries flowing into this country’s gigantic pool of illicit big cats. Unfortunately, people do still buy tigers (and sometimes, lions) as pets, often via a flourishing nationwide black market of exotic animals.

They usually get them as kittens, when they’re supremely cute and relatively easy to care for. But over time, these animals grow bigger, wilder, more dangerous, not to mention quite expensive to feed. So people eventually look to dump these “pets.”

There’s an overlapping problem with outfits that provide opportunities to pet and have your picture taken with baby tigers, as well as roadside zoos. These are unlicensed and often-nefarious operations that present an assortment of caged animals—often big cats and other exotic animals—designed to attract motorists, who can pet, feed and play with those beings behind bars.

Too, sometimes a sanctuary is revealed to be fraudulent, engaging in behavior akin to a roadside zoo, or otherwise running afoul of the law, and when authorities bust the place, those animals need to be placed somewhere.

So most big cat sanctuaries constantly receive inquiries, asking if they are able to take some big cats from the latest raid or closed down operation.

This represents another example of the constant surplus of big cats, and the correspondingly constant search for homes for them.

Yet, when I asked Hedren what criteria she uses to determine whether they can take any of the never-ending supply of these animals, she answered that they “very rarely” receive those calls.

I was dumbfounded. But to make sure I hadn’t misunderstood what she was saying—and in an exchange that was later echoed when I sought to clarify her comments about the Hitchcock accusation—I followed up a few times.

The official re-release trailer for Roar, described in the trailer as ‘the most dangerous film ever made.’ It also notes: ‘No animals were harmed in the making of this film. 70 members of the cast and crew were.’

The upshot: Sure enough, despite housing about a third of the number of big cats that lived there in Shambala’s early days—and the ongoing insatiable national need to find new homes for those felines—Hedren reiterated she almost never receives those requests.

–“Oh, yeah, that was nothing,” she interrupts, laughing.

But I try again to complete my thought, remarking that it’s striking how disproportionate things can sometimes be, that although it amounts to a mere fraction of the pages occupied by animal matters, nearly every Tippi review and story about have focused on her account of Hitchcock’s sexual harassment and assault.

“That was just silliness,” she said.

I try again, acknowledging that her complicated working relationship with Hitchcock has certainly been written about before, was addressed in the HBO film, The Girl, has been the subject of gossip and chatter for decades.

But the book was the first time she’s directly addressed that relationship—and I wonder if that opportunity filled her with a sense of trepidation, or relief?

‘Um, have you read your memoir, Miss Hedren?’

“Oh, that. That was nothing,” she said, laughing again. “It really was nothing.”

But you hadn’t really addressed it directly before, far as I know.

“I handled it at the time, and far as I was concerned, that was over. This sort of thing happens to every woman.”

As we may have established earlier, I didn’t have the snark credentials in this scenario to force an unpleasant confrontation here.

Besides, the exchange we did have suggests this issue, at its core, may be generational. She recently turned 87.

For many, she’s an icon.

Follow this link to the Dec. 14 Talking Animals, featuring the interview with Tippi Hedren