Home Blog News and Public Affairs Twilight of American Sanity? A top psychiatrist analyzes the US in the age of Trump 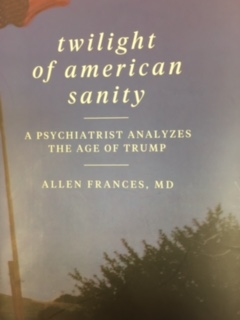 Radioactivity 9 13 17
Welcome to Radioactivity. I’m Rob Lorei. Coming up- we’ll have one of the nation’s top psychiatrists talk about the new book he’s written about Donald Trump. And we’ll talk more about hurricane recovery and take your phone calls. Later we’ll talk with a spokesperson for Florida Power and Light about the outages in Manatee, Sarasota, Desoto, Hardee and Charlotte counties and when the hundreds of thousands of people without power in the Tampa bay area can expect their power to be restored.

First, a brand new book by one of the top psychiatric doctors in the US says with many people questioning Donald Trump’s mental fitness for office— Dr. Allen Frances says the big question is what does it say about the US that we elected Donald Trump in this moment in US history. Frances is professor emeritus and former chair of the Department of Psychiatry and Behavioral Science at the Duke University School of Medicine. His book is TWILIGHT OF AMERICAN SANITY: A Psychiatrist Analyzes the Age of Trump (William Morrow). In it he asks what does it say about us- that we elected someone so manifestly unfit to be president? Dr. Frances joins us now.