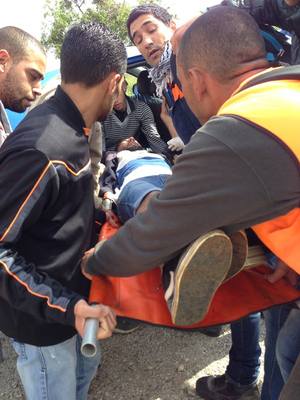 Editor’s note: A Tampa peace activist is volunteering with a Palestinian-solidarity women’s group in the West Bank, the International Women’s Peace Service. She has witnessed clashes between Israelis and Palestinians at recent demonstrations, so I asked her to write about her experiences. What I didn’t know is she would get injured. Here’s what she wrote for us about Thursday & Friday’s demonstrations. If you want to read what she wrote about it for IWPS, click here – Sean

Israeli occupation forces and border police injured dozens of people and sent seven Palestinian demonstrators to a nearby hospital in Ramallah with bullet wounds. One person was shot in the face. The Israelis indiscriminately opened fire on the demonstration, which was made up of almost two hundred people, including journalists, medics and children.

I have been volunteering in the occupied West Bank for six weeks and have attended several demonstrations, but this is the first time I was injured. I was shot in the chest with a tear gas canister. At first I thought it was a rubber-coated steel bullet. Because I didn’t immediately run, I was badly teargassed and stuck on a hillside until a medic came and pulled me out. The canister shot me in the ribs and it bled a bit from the cut but mainly caused bruising and pain!

Palestinian police were blocked from entering by Israeli forces who chased demonstrators on foot through the streets of the village Beitunia. The Israelis fired rubber-coated steel bullets, hundreds of tear gas grenades, stun grenades and live ammunition in a street lined with homes and businesses.

Ambulances barely made it back to the demonstration site where more young Palestinians were bleeding on the ground with bullet wounds.

The Palestinian youth with the facial wound had a bullet enter his upper lip and exit through his left cheek. Within less than two hours of being treated, he returned to the demonstration with
bandages covering half his face. Palestinians continued their impassioned struggle for more than a thousand prisoners locked inside Ofer, including the 80 children.

Ambulance ride to hospital in Ramallah with a young Palestinian demonstrator shot with live ammunition at Ofer Prisoners Day clashes.