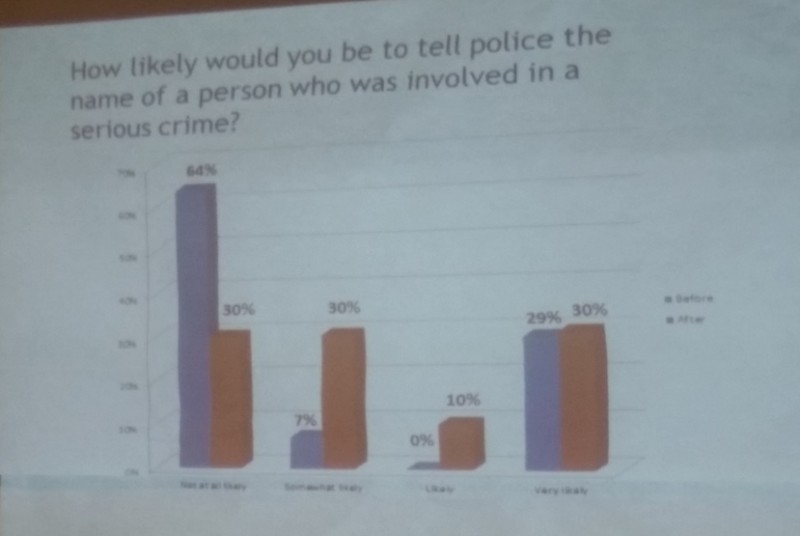 Hillsborough County is looking at ways to cut down on violent crime by engaging communities. One way the Safe & Sound Hillsborough group has done that is by taking teens from the Grant Park Neighborhood east of Tampa and having them participate in a mock trial on a Friday evening.

Dr. Kathleen Heide is a professor of criminology at the University of South Florida and surveyed the kids before and after the mock trial exercise to find out how their attitudes changed about violence in their community.

“It shows that we’ve got something that really interested them. They put their heart and soul into it. And so the opportunity for us to change attitudes and promote law-abiding behavior certainly is a possibility. And then when we all sat around and ate pizza at the end what was really wonderful is that everybody had a good time. And, you know, this isn’t new, but it’s always nice to see, is when adults approach kids in a respectful way and listen as though the kids have something to say, kids will open up. And they did. So the plan is to do more of these.”

After a press conference Tuesday morning, Heide said Safe & Sound Hillsborough plans to do mock trials and other interventions once a month in neighborhoods with more crime and violence in order to see if it impacts youth attitudes.

In the results from that single test so far kids said they feel safer inside their schools than in their communities. Cindy Stuart is a member of the Hillsborough County School Board (District 3).

“Well, what I make of that is that the district has put a lot of time and energy into making sure that students have people they can talk to at schools. They have resources there during school time if they’re having issues out of school. And let’s face it; they’re with us the majority of the day. So I would hope that for that for that majority of the day we provide a safe and secure and sound environment for them to be and to move forward academically but also socially and emotionally so they can be productive citizens when they leave us.”

Stuart says the Hillsborough school district will release 100 surveys Tuesday at every middle and high school about how children feel about neighborhood safety and gun violence.