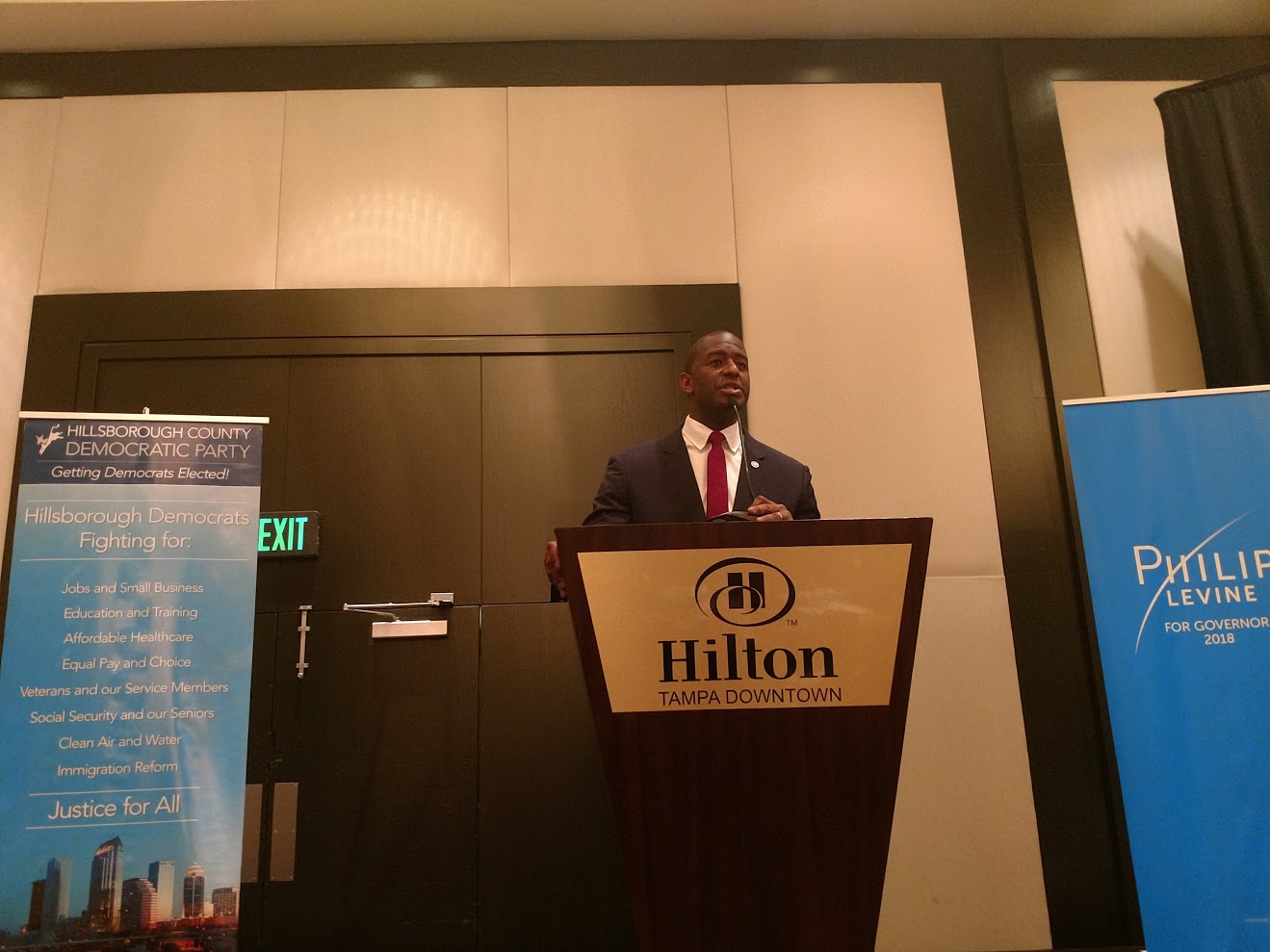 Fighting to lead their party in November and reversing two decades of Republican rule in Tallahassee, the four Democratic candidates for governor in Florida spoke in Tampa on Saturday night in front of several hundred members of the Hillsborough County Democratic Party.

Philip Levine, Gwen Graham, Andrew Gillum and Chis King all gave their relatively brief speeches in less than ideal circumstances, however, as they had to compete against the pulsating sounds of an electronic dance music soundtrack that bled through the walls of a ballroom at the Tampa Hilton Downtown hotel, as a high school prom dance took place in an adjoining room.

That background noise seemed to energize all of the candidates speeches, with Gillum gathering the most applause from the crowd and further reinforced the notion that he is the by far the choice of the progressive wing of the FDP to become the party’s nominee come this August.

“I want you to know that the way that we’re going to win in November is not by shrinking from who we are. It’s not by pretending to be Republican. It is not by pretending that we don’t need our very voters who are necessary in order for us,” the Tallahassee Mayor said, adding that a winning coalition in November needed to include voters who are largely “blacker, browner, younger and poorer.”

“And we’ve gotta get to them,” he implored. “Give them a reason to vote for something, and not just against something, right?”

While the 38-year-old Gillum was clearly the people’s choice in the room, he’s still a distant third amongst registered Democrats in recent polls, with Levine and Graham both getting more than 20 percent of the vote.

Improving education and transportation in the state were clear themes that emerged from all the candidates on Saturday.

Graham, who took turns getting verbally trashed by both Gillum and King in the Fox-13 televised debate last week which she labeled as “Gwen vs. the men,” flat out said that the fact that she is the only woman in the race counts for something extra in the current #MeToo zeitgeist.

“To all the men in the room…I respect each of you. But guess what? This election? This election is about women! It’s about women!” she repeated as the crowd cheered loudly. Graham added that she hears such sentiment everywhere she goes, including being greeted by a “large group of women” at an event in Fort Lauderdale recently who said that while they were Republicans, they said it was time for a women governor in Florida (and they wrote checks for her as well, she added).

Levine has seen his poll numbers rise in conjunction with the presence of his television ads that have aired frequently since he entered the race last fall. He went into rhetorical overdrive in touting the significance of this November’s election.

King, the 39-year-old Winter Park businessman and first-time political candidate, began his remarks by commenting on the prom taking place next door, reminiscing about how his high school prom date ultimately became his wife, boasting that he was just a sophomore while she was a senior.

“It was a bit of a problem for her. It was a huge opportunity for me,” he joked.

King has had difficulty gathering traction in the race, but he sounded emboldened after going toe-to-toe with his three Democratic opponents in the Tampa televised debate, and was the only candidate on the stage Saturday night to talk about the GOP nominees competing to succeed Rick Scott’s eight-year reign in office.

But it’s a long way before the Democrats will be able to settle on a candidate. Graham was the conventional wisdom early favorite, but has been hammered by King and Gillum for some of her more centrist to conservative stances she took in in her one term serving in Congress, positions that were always going to be exploited by her opponents in a Democratic primary (In an interview before her speech, Graham said she takes such criticism as a “badge of honor…it means that they recognize that we’re the front-runner”).

The 55-year-old daughter of former Governor and U.S. Senator Bob Graham, she focused in her speech on how she would improve education if elected, and talked about the importance of having a skilled workforce to become more attractive to out of state companies thinking of relocating to Florida.

She also boasted that her mainstream political persona would be the answer in becoming the first Democrat to take the governor’s mansion in two decades, saying that a reason why Hillary Clinton lost to Donald Trump in Florida’s presidential election was because “she got beaten really badly north of Orlando.”

“We’re not going to let that happen this time, right?” she asked the audience.

Clad in what has becoming somewhat of a signature sartorial look that includes wearing blue jeans and tennis shoes, the 55-year-old Levine talked up his roots as a businessman, where he ended up a multimillionaire after building a company that provides media services to the cruise industry.

“I go around the state and I tell people my journey started in business and then I became a mayor. Some folks will say to me,’ Mayor, how can you be a Democrat and you’re so pro business?’ he said, adding that he asks them if they actually look at the human resources policies of some of the country’s leading businesses.

“I mean, Amazon and eBay and Apple and Lockheed and Boeing and G.E? Well, you’re going to notice that they’re all similar: They’re pro-education. They’re pro-health care. They’re pro-environment. As a matter of fact, they’re anti-discrimiantion, and if they’re going to come to your community, you better make sure that you have good public transportation.”

There was not much discussion about guns, an issue that for the first time in decades could aid Democrats statewide in the aftermath of the Valentine’s Day massacre in Parkland. President Trump also was only occasionally referenced, with Chief Financial Officer candidate Jeremy Ring saying that this election was about making the case for Democratic party values, not trashing the president.

There are still four more months before Democratic voters will choose their nominee.

(Sound from Saturday night’s event will be added to this story on Monday).