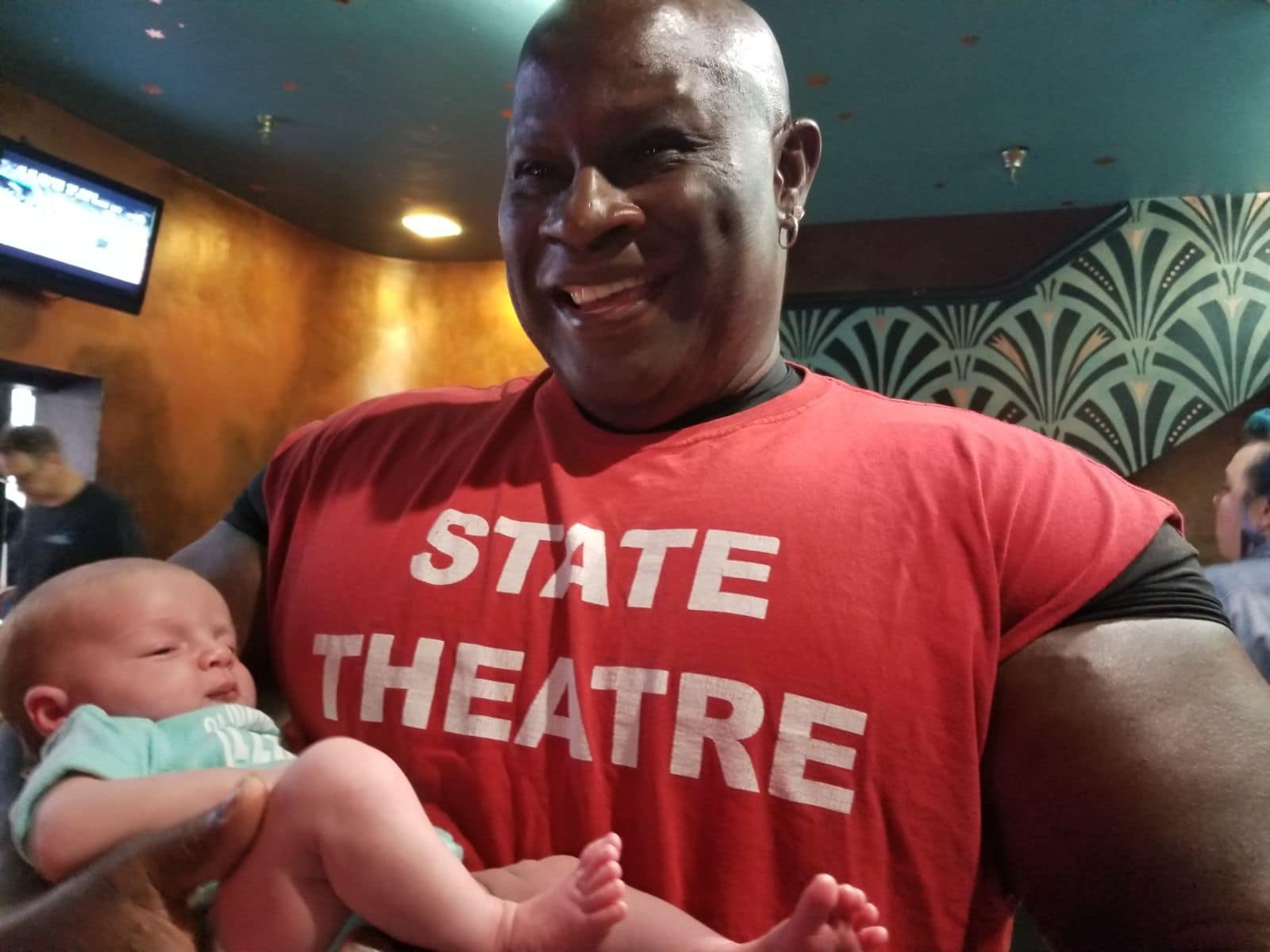 Michael ‘Big Mike’ Lewis, the massive, muscular head of security who became the face of concert venues around St. Petersburg died this week after a battle with COVID-19. St. Pete’s music community is mourning the loss of a man whose heart was a big as the former pro-NFL player’s biceps.

From Channel Zero and Club Detroit around the Jannus district in the late ‘80s to decades and thousands of shows at the State Theater, ‘Big Mike’ Lewis was often the first person you’d see walking up to a show for more than 30 years.

And the first thing you’d be likely to notice is his size. Big Mike played pro-football with the New Orleans Saints until an injury after a game cut his career short. But he never lost his love for football or his athletic physique.

A tall, dark Black man with a chest like the resolute desk and biceps bigger than most people’s waists he was a sight. His muscles even more pronounced framed in one of his tight “Security” shirts.

“You could probably look at him and find him to be a bit intimidating physically,” Rob Douglas said. “But that 1,000-watt smile would get turned on and gales of laughter and what have you. And you realize that you’re in the presence of somebody who’s gonna look out for you.”

Douglas is the entertainment director at Jannus Live and has been promoting shows locally since the early 80s. Douglas met Big Mike in the late 80s when Club Detroit became Channel Zero for a few years.

That’s also when Big Mike met Dave Hundley who helped run the State Theater and No Clubs Productions for years. Now he’s at the Orpheum in Tampa.

Big Mike became most well-known while at the State. He was there most every night for most every show be it hip-hop, ska, punk rock or metal. Hundley and others estimate he’d seen a million faces working those doors. And he smiled at them all.

“Mike literally became the ambassador to our venue,” he said. “And in essence, he saw every single face coming into a show. None of us ever did.”

During his tenure as the de-facto gatekeeper of live music in St. Pete, Big Mike Lewis watched generations of concert goers grow from teens going to their first shows into parents dropping their own kids off.

“Mike alleviated most people’s worry about their kid being at a concert,” Hundley said. “Women felt safe. I felt safe. I trusted him with everything at the front door.”

Kristin Stigaard is one of those kids Big Mike got to watch grow into an adult and work colleague. She started helping bands and labels promote on street teams about 15 years ago and now is the marketing director and ticket coordinator for No Clubs.

She got her start after a show at the State and an interaction with Big Mike and the owner of No Clubs.

“Big Mike had tapped me on my shoulder as I was leaving. And I looked back and he’s towering over me because I’m short and he’s super tall, super big old guy. And I was like, ‘oh my god what did I do;” Stigaard said. “And he was like, ‘Big Man wants to go talk to you real quick.’ And it was Tony and Tony gave me his business card. And that was the start of everything.”

Like many others, Stigaard would spend nights at State just to hang out with Big Mike while he chewed through bags of sunflower seeds, often leaving a pile of shells on the floor. His infectious smile and positive attitude stood in contrast to his hulking frame. And Hundley said he passed that on to the rest of the security staff. Hundley said the State Theater likely had the friendliest security staff around and if anyone had to be removed it usually led to apologies instead of issues.

For the love of the game

Douglas said Big Mike worked because he loved it. He had a bit of a headstart with a settlement after his NFL days, but still worked a day job as a delivery driver for a plumbing company and spent his nights at venues.

And he was a paragon of health.

He exercised daily. Running 2-3 miles, bench pressing 400 pounds for reps and never smoked or drank. It made his death at 58 from COVID a stark reminder that the pandemic is still far from over.

“It’s kind of weird to think of someone who was so healthy, so conscious of his physical wellbeing succumbing to this virus,” Douglas said.

Big Mike Lewis started having breathing trouble on May 8 and entered the hospital with a COVID diagnoses. There, he developed pneumonia and died from complications related to COVID-19 less than 10 days later. He’s survived by four children and five grand children.

His family is having a 10 a.m. memorial service Saturday at St. Pete’s City on a Hill Church.

And a celebration of Big Mike will be held at Ringside Café Friday at 8 p.m.