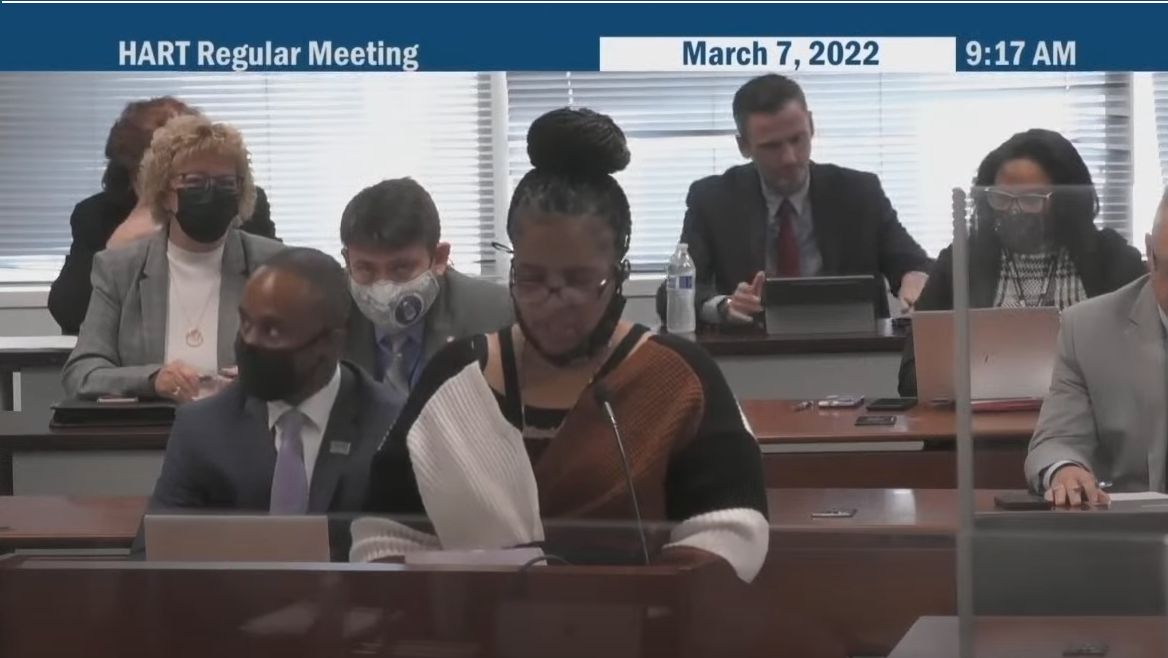 Hillsborough County Commissioner Mariella Smith vocalized her support this week for raising the minimum wage of HART workers to a base pay of $15 per hour. This show of support from Smith, who sits as a member of the transit system’s oversight board, was offered during a meeting of the HART board on Monday. It came in direct response to public testimony from HART employees, who are currently in negotiations for a new contract with their union, the Amalgamated Transit Union (ATU) Local 1539.

The union represents over 500 bus operators, mechanics, customer service workers, and other public transportation workers with HART. As the union resumes contract negotiations with HART this week, they’re calling for fair pay raises, better benefits, and improvements to their working conditions.

A local bus operator with the union, Angela Read, asked the board on Monday: Where’s the caring for HART’s essential workers who labor day in and day out to keep operations running? She described in detail the kinds of conditions she and other employees are working with: a lack of accommodations during the pandemic, fare issues, worker shortages, and hostility at times from those who ride public transit. In 2019, one bus driver – Thomas Dunn – was fatally stabbed by a passenger with suspected mental illness. That murder trial resumed in Hillsborough County this week.

“If you understood caring, it wouldn’t be such a challenge to negotiate bonuses, better wages, better benefits, better conditions, showing appreciation for all of us who have been, and continue to be at risk,” said Read. “We are the foundation of HART. We are all supposed to be on the same team with the same goal. United we stand, divided HART falls.”

According to HART’s CEO Adelee Le Grand, just 16 HART workers currently make less than $15 an hour. Le Grand, who took up her post as CEO just last year, was herself recently offered a generous 15% raise by the board – which would boost her annual pay from $250,000 to $287,500.

Ismael Rivera, who works as an organizer with the local transit union, said he testified in Congress himself, to lobby for money for transportation and personal protective equipment (PPE).

He said, if anyone at HART should be getting a raise, the transit system needs to start with its frontline, essential workers. “We have an acronym: WTF. And that’s, Where’s the Fairness?’ The CEO can get $37,000 plus a raise. We still struggling.”

Rivera told WMNF last week that he wasn’t sure whether HART’s board was aware of what management was offering its union labor, in their “best and final offer” that was rejected by the majority of union membership last month. That’s why he – and allies from other local unions and the Democratic Socialists of America (DSA) – attended the board meeting on Monday, to make their voices heard.

“You mentioned in the last board meeting how essential we are, and how great we are. So, we would like, rather than say it, to show us how great of essential employees we are,” said Rivera.

‘Fifteen is the least we can do’

Later in the meeting after public comment, County Commissioner Mariella Smith, who sits on the board, recognized workers’ concerns. She said, if HART’s CEO – who was present at the meeting – is getting a raise, it’s only fair that the transit authority’s essential workers do, too. “I have been an advocate for Fight for $15 for years,” Smith told WMNF on Wednesday. “And now, I mean, that started 10 years ago. Now, fifteen is like, the least we can do.”

As a county commissioner, Smith has advocated for higher wages for blue-collar county workers, and for workers of Tampa Bay Water – where she also sits on the board. And while $15 is her idea of the bare minimum, she said the hope is that the pay bump will lead to a ripple effect for non-union labor, as well as workers who make above $15 an hour.

Smith first brought up raising wages for HART workers last month, when the board made the initial motion to boost pay for Le Grand, HART’s CEO, based on metrics such as performance and community engagement.

During Monday’s meeting, Smith made an amendment to that motion, adding a commitment from the board to that $15 an hour minimum for HART’s lowest-paid workers. While some board members disagreed with grouping both pay raises together, they ultimately expressed support for raising that base pay with a unanimous motion approval.

This recommendation from the board may very well be considered by HART management in negotiations with the workers’ union. But HART CEO Le Grand stressed that this doesn’t mean the pay raise will go into immediate effect. Nor will that process be the same for non-union labor. Ultimately, the $15 minimum wage for workers within the bargaining unit will need to be worked out through their contract with management.

The HART workers’ union resumed contract negotiations with management on Tuesday, just one day after Smith made the motion to support workers’ call for higher pay. According to Rivera, the local union organizer and trustee, the union was still in negotiations on Wednesday. WMNF reached out to HART by email to seek a statement on the status of negotiations, but as of publication we have not received a response.